The Hollow Fortress is the third main mission of the second region in NiOh 2. This page has a walkthrough for this mission.

Talk to the NPC and then move out. The ladder on the left leads to the gate, however, it is closed and you must unlock it from the other side. Instead, go right, defeating the Dweller on your way. Go up the ladder. 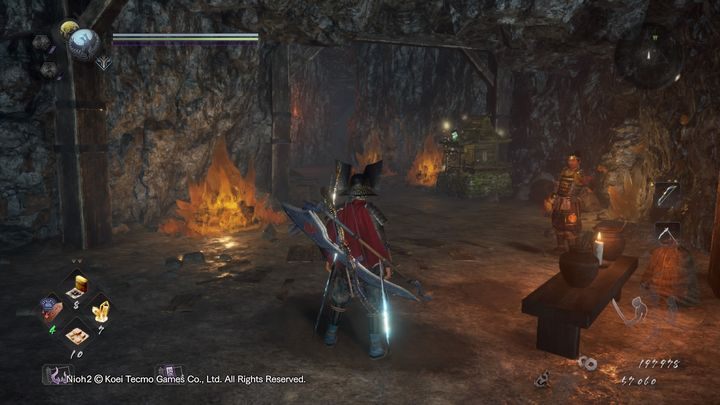 You will find a lot of Dwellers extracting Amrita crystals. Defeat them. There are more of these enemies at the bottom, but they are smaller versions. A few more Dwellers are at the top - watch out, one of them is larger. Keep going forward and go up the stairs. 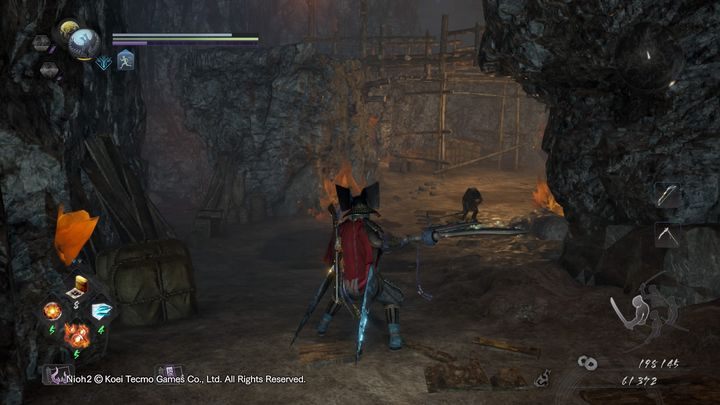 However, keep an eye on the lamp next to the stairs, a Yokai called Koroka will get out of it. This is a fire type Yokai, so fire damage does nothing to it. Attack it from behind and watch for its range attacks. It doesn't have much health, so you can keep attacking it without problems. 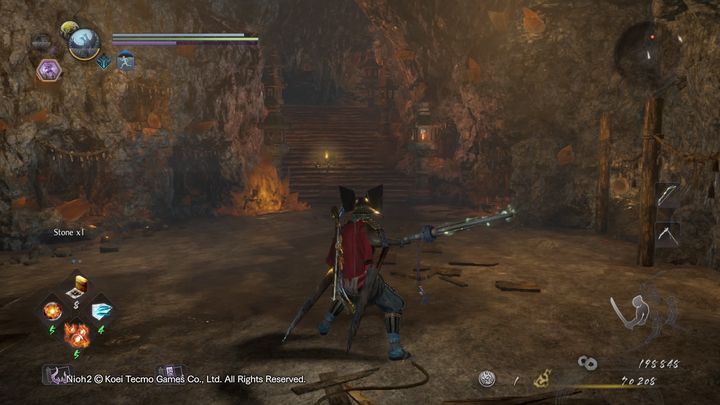 Go up the ladder and then jump down the wooden beams. Watch out for the opponents - you don't want to fall and die. 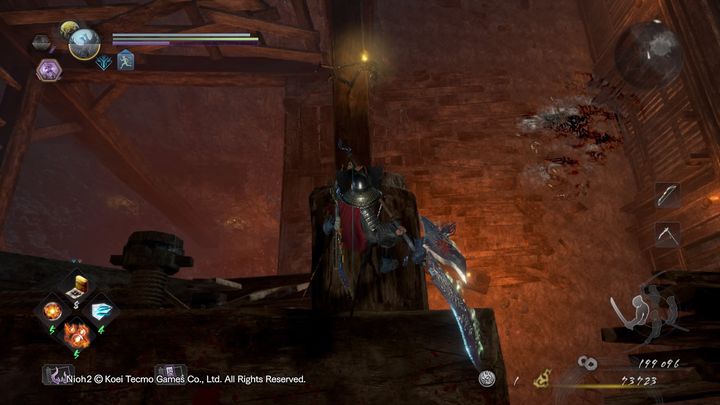 Enki, hidden in the Yokai Realm, is next to the elevator mechanism. Behind it you have a door that serves as a shortcut leading to the starting point. After defeating it, open the shortcut and take the elevator up by standing on the plate in the center of the elevator. 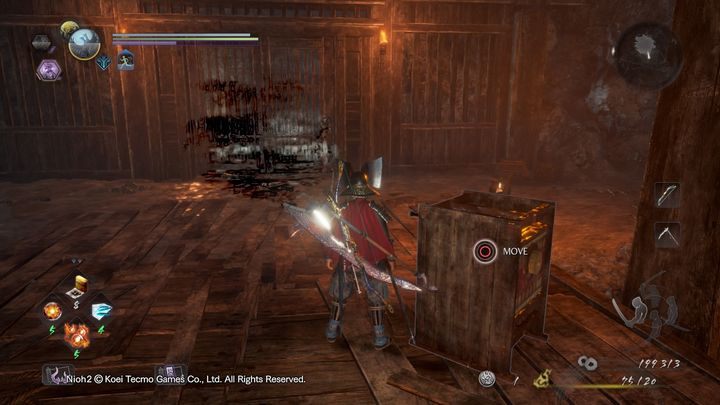 When you reach the top, go ahead and you will encounter a human soldier. You can sneak up on him and do a lot of damage - he is facing you with his back. However, watch out for the weaker soldier with a torch patrolling the area on the left - he can alarm the others.

The path to the left leads further. A stronger Dweller is standing straight ahead. Moving further, you will encounter a stone passage leading down. But before you choose this path, go right, defeat the soldier and activate the Cat Yokai, Scampuss. Go down the stone path and jump down near the chest - you will find yourself in the Yokai Realm. 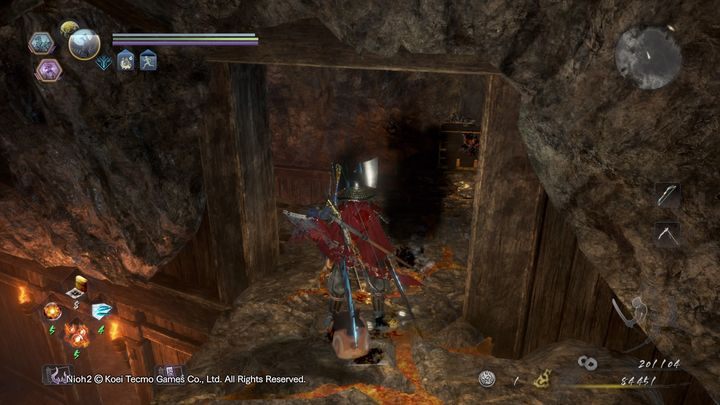 Jumping lower, you will encounter Dwellers and a new enemy type - a soldier who, after receiving damage, will show his true face. The soldier's head will grow, giving this Yokai more attack range. Rokurokubi has long-range attacks, can attack with its head, and also shoot poison. It is better to keep a close distance from it. After you defeat it, you will purify the Yokai Realm. 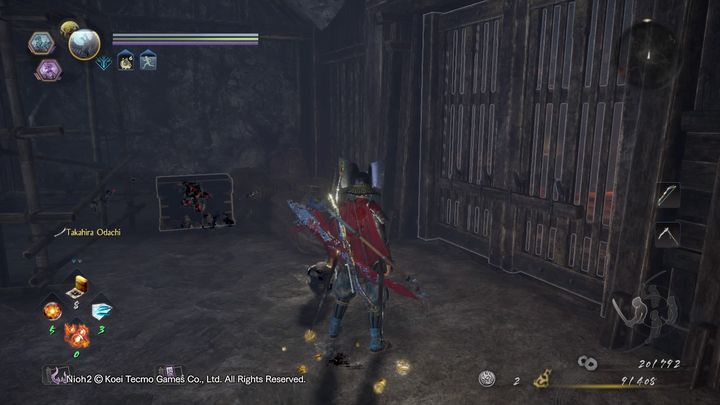 Moving forward, you will encounter another chest and a door on the right that serves as a shortcut. Turn left, go up, and then on the right you will find the second shrine.

Pray at the shrine and continue walking to the right. There you will find e.g. a Sudama - drop an item to receive a different one. On the left side leading up, you will find several opponents. However, don't fight them - there is a one-eyed Yokai at the top that will throw a large snow ball in your direction. This attack deals a lot of damage. Therefore, it is better to go up a little and quickly go down. The ball will kill the opponents, and you will only have to fight with the cyclops. Aim for the eye, attack from behind and strike hard.

Moving on, you will encounter two soldiers standing in place, the patrolling one is actually a Rokurokubi, so it is better to shoot the kneeling Dweller and fight the Yokai one on one. There is a Scampuss in the house next to the Dweller, but beware of another enemy inside. 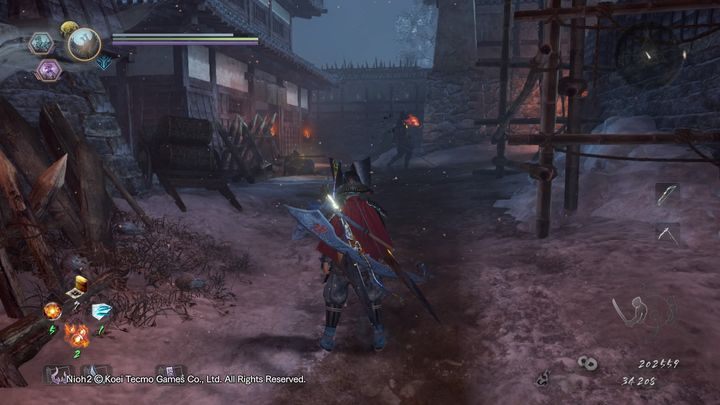 Continue the journey. You will see two paths leading to the same point. However, it is better to go left, you will collect more things there. Defeat the Yokai soldier and move on. 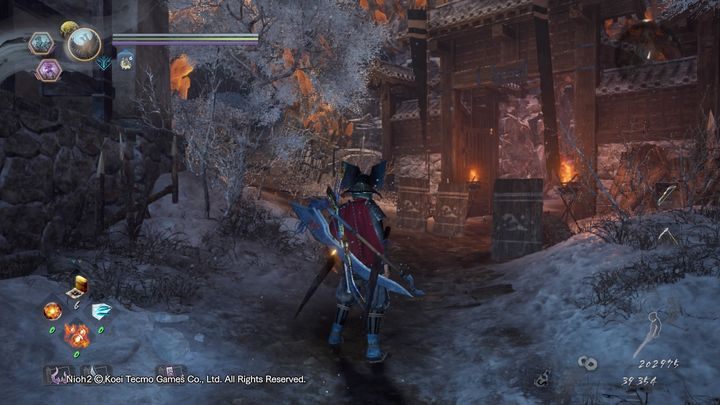 Another lamp is straight ahead - you will face another Koroka. Defeat the enemy and then go to the left, following the stone road. 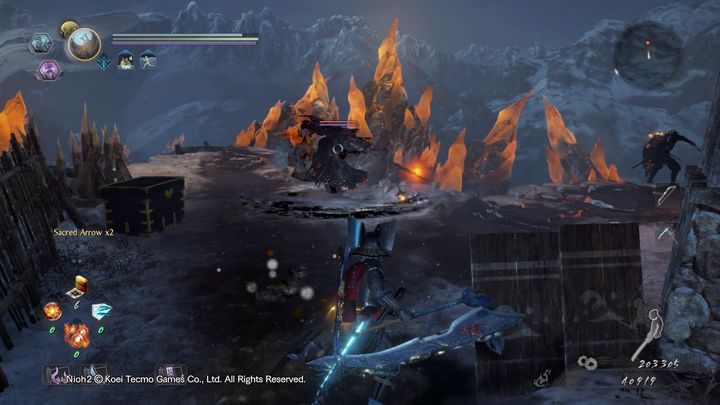 There you will find a Snowclops - deal with this enemy in the same way as the one before. Be careful not to fall. Climb the ladder to the building, defeat the opponents and jump down from the other side. From there, go up the stairs. 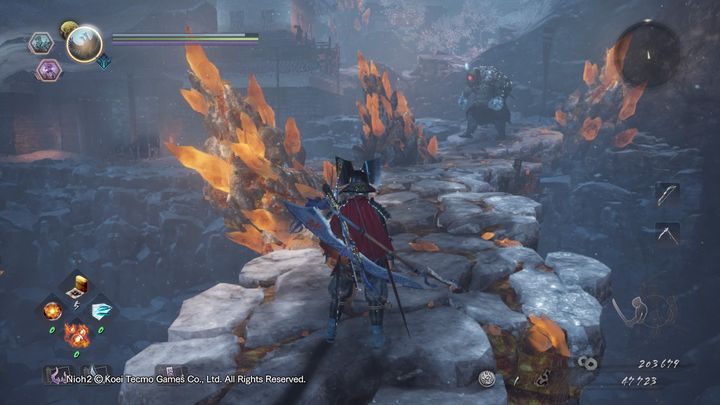 Rokurokubi guards the passage at the stairs, watch for his long-range attacks. At the top, in the center of the building, there is another cyclops and a Yokai soldier. Take care of the soldier first, and shoot the cyclops in the eye to lure him out of the building. A Yokai Realm is in the center, so it will be much harder to fight that enemy there. Inside the building you will also find a larger Dweller and a Rokurokubi on the top floor. 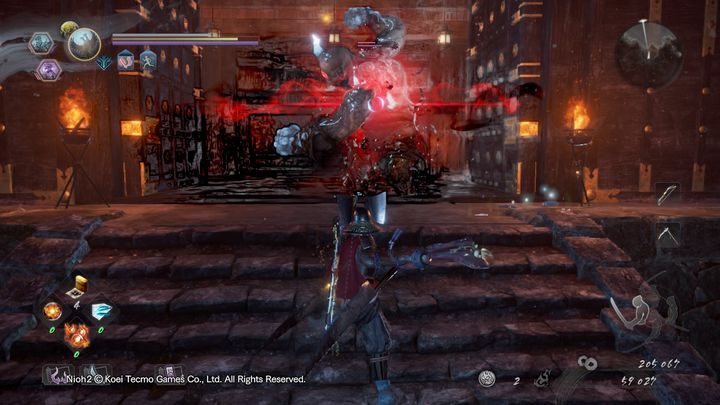 However, turn right first before going there. Look for the white building with a Yokai Realm inside - Enki will come out of it. He guards the chest inside which you will find the Castle Gate Key. You will use them to e.g. open the gate that is located on the right, near the entrance to the building where the cyclops is located. 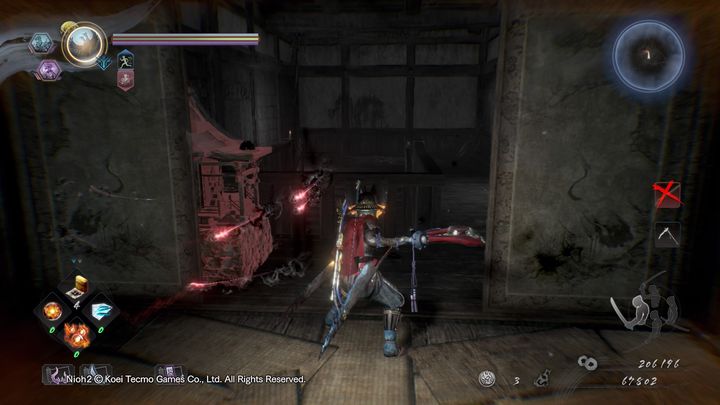 Crossing the other rooms of the building, you will encounter a shrine. However, you can't activate it until you defeat the source of the Yokai Realm. When you are at the shrine, go down the stairs. 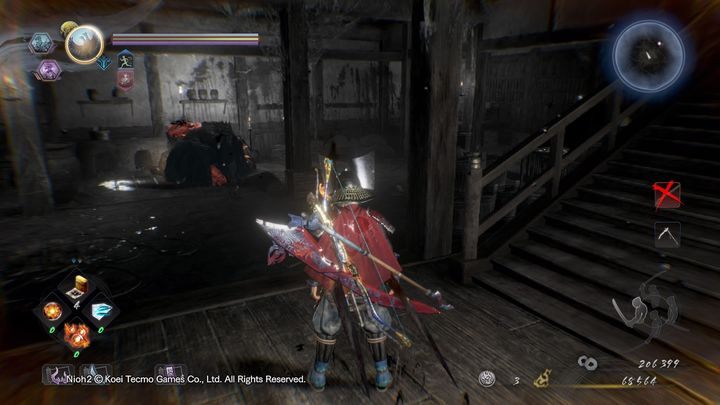 There you will meet Enki and Koroka in the lamp form. Take care of Enki first, and then approach the lamp. Koroka is the main source of the Yokai Realm. After you defeat it, go back upstairs to rest at the shrine.

When you are at the shrine, go up to the top floor of the building. There you will encounter new opponents, mostly humans. 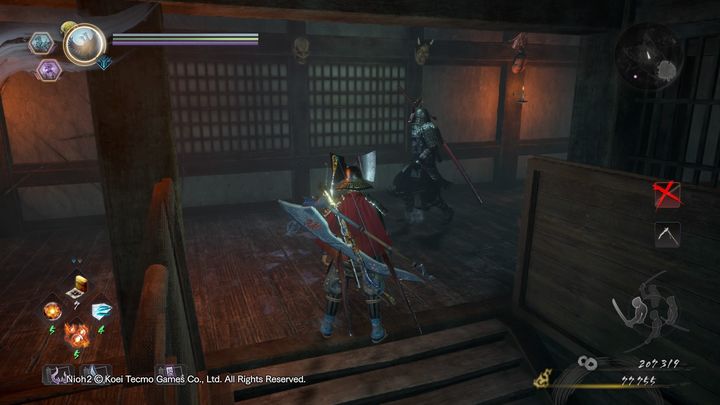 There are several other opponents behind the canvas. A Yokai soldier is on the left. Also, a Rokurokubi will pop out of the Yokai Realm. The path up leads to the boss arena, which is patrolled by another human soldier. But don't go in there, because there is a secret passage on the right. 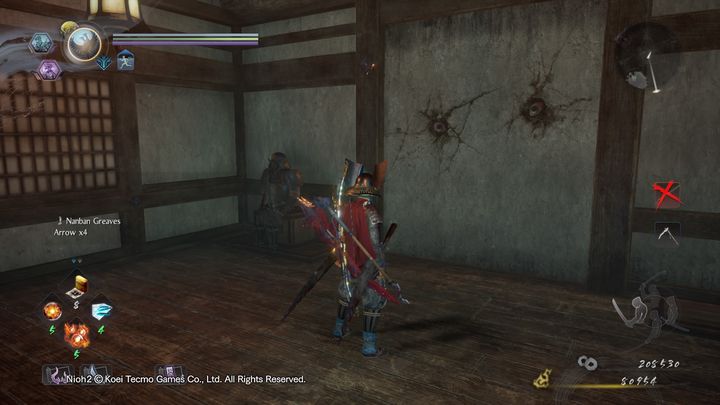 You can fight Yokai Nurikabe, but there is an easier way to defeat it. It will let you pass if you show a gesture that it likes. You have two attempts, if its eyes light up red, it means that you shouldn't use another gesture of the same color. A hot spring is behind the wall - use it to restore your health. 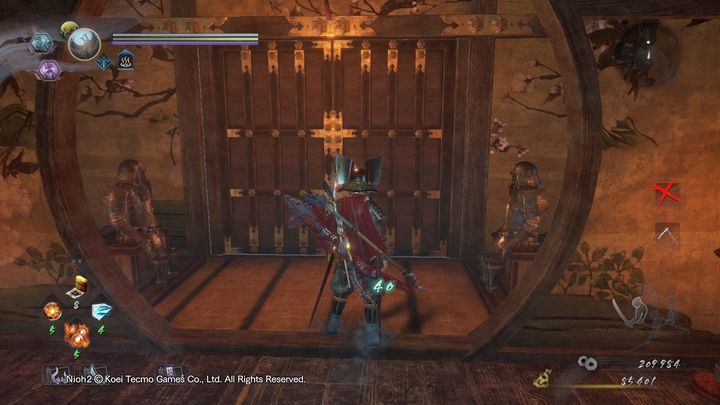 At the very top is the boss arena - you will face Saito Yoshitatsu. The boss fight is described in a separate chapter.