The Hidden Monsters of Okehazama is the first main mission of the second region in NiOh 2. On this page of the guide, you will find a walkthrough for this mission.

Talk to the NPC, then go to the nearby shrine located further to the left. There is a ladder nearby, but you need to lower it first - you will unlock this shortcut later. Head to the second NPC - to be able to pass, you must perform a gesture from the red group. 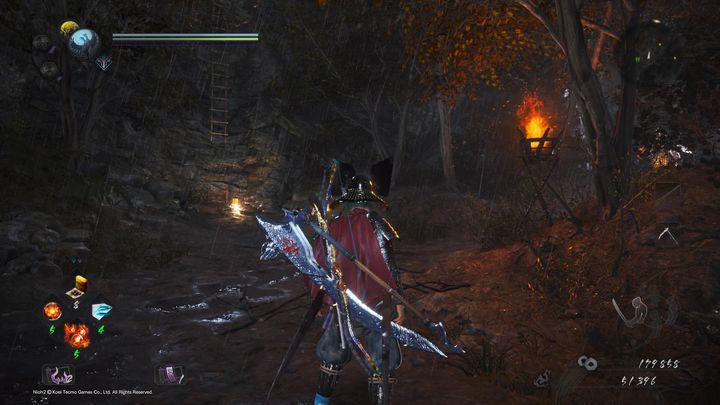 After getting permission to pass, move forward and defeat several Gaki. Watch out for the entrance to the cave on the left - there are bats that can push you into the abyss. It is best to hold the block or just avoid them. 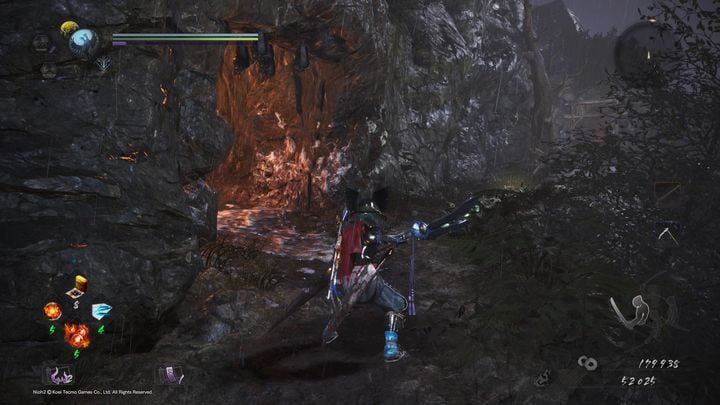 As soon as you get rid of the bats, enter the cave. There you will face three Gaki inside. Be careful, because one is hiding behind wooden boxes. After defeating them, go up a little, and defeat Enki. Be careful - the enemy is in a small room. It is better to lure him out. 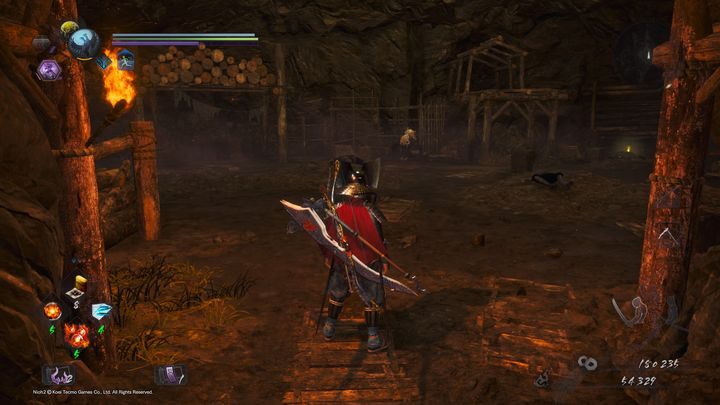 Moving forward, you will encounter Yamanba. This is an old Yokai woman who fights with two daggers. When fighting her, you should try to get behind her back and attack. Watch out for her rapid slashes. However, this enemy isn't difficult to beat. After defeating her, turn left - you will find, among other things, a Sudama and a ladder that leads to the first shrine. 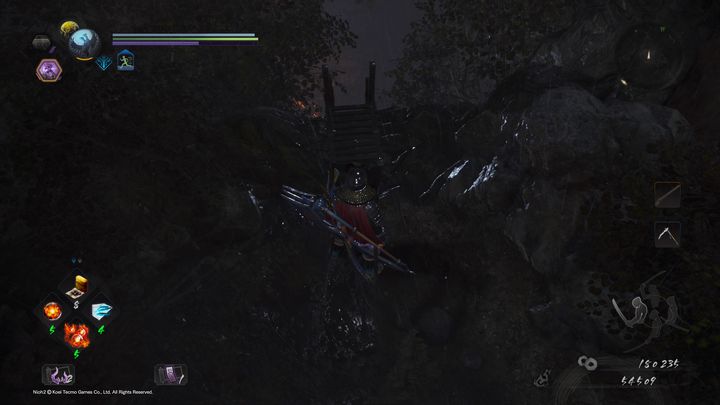 Lower the ladder and return to the cave, to the place where you fought Yamanba. On the right, there is an exit from the cave - go through it and then move forward. You get outside, where the narrow road leads in one direction. Be careful when fighting someone here - it is easy to fall into the abyss. 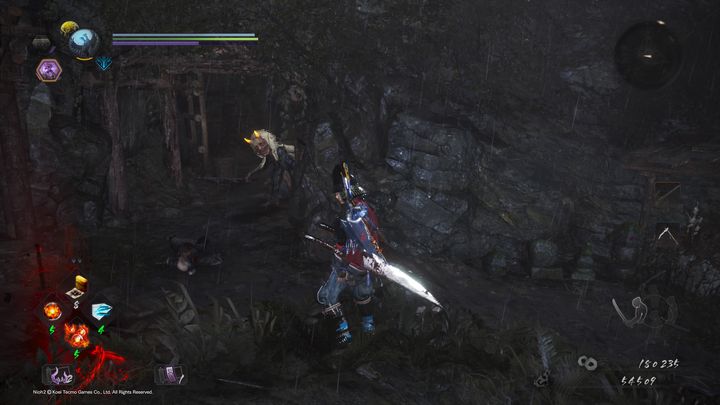 Watch out for the Yamanba leaning from behind the right corner - she will probably attack you with a Burst Attack. In the place where the enemy is located, you can pet a Yokai cat - it will restore your Anima and help in battle. Move forward, try not to fall, and exit the cave. 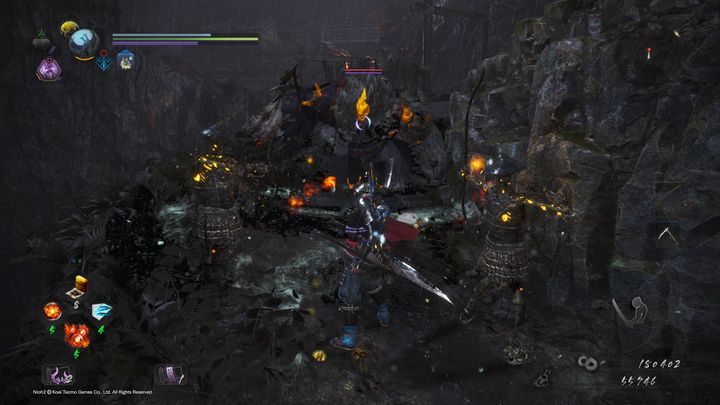 Another Enki is waiting for you. This fight can be significantly complicated by the environment - try not to dodge in panic, you don't want to fall down. After you defeat him, go left across the bridge and head directly to the Yokai Realm. Keep moving forward until you encounter Yamanba and Gaki. Try to shoot the Gaki so that he would not interfere, and then fight Yamanba. 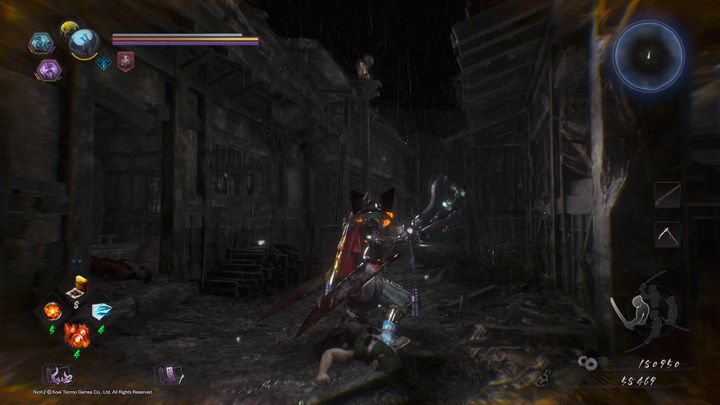 Moving on, you will face the next opponents, including Gaki on the building's rooftop - shoot it down from a safe distance. Then you will have a fight with Yamanba in one of the houses. After that, you will face Gaki and Enki. Enki is responsible for creating the Yokai Realm - if you defeat him first, you will purify the place and make other fights easier. 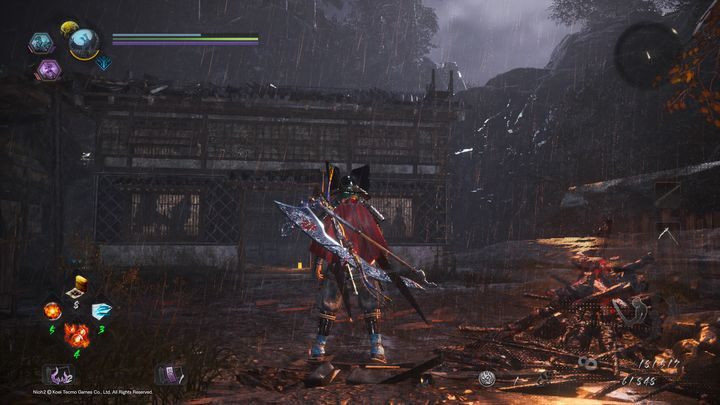 After you have defeated everyone, climb the ladder and turn right. Moving forward, you will come across the second shrine. Use is to restore health and level up your character.

After resting at the temple, follow the only road down the cliff. Soon, you will encounter Karasu Tengu - this Yokai resembles a bird. Tengu is a fairly difficult opponent - it uses its wings for attacks which means it can strike from the air, and one of its moves is a spin kick. When it charges its Burst Attack, Tengu will perform a series of spin attacks on the ground. 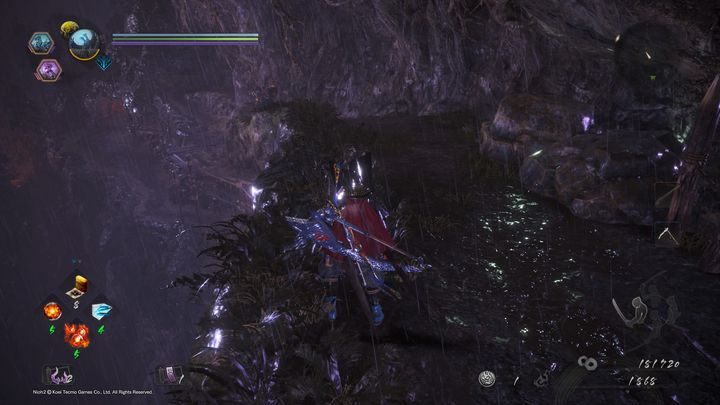 Moving on, there is another entrance to the caves on the right. There you can find, for example, another Yamanba. On the right, there is a large Gaki standing next to a large ball - you can kill it now to prevent the enemy from throwing the ball at you while you are descending. This cave also has a passage that will allow you to proceed with the mission. 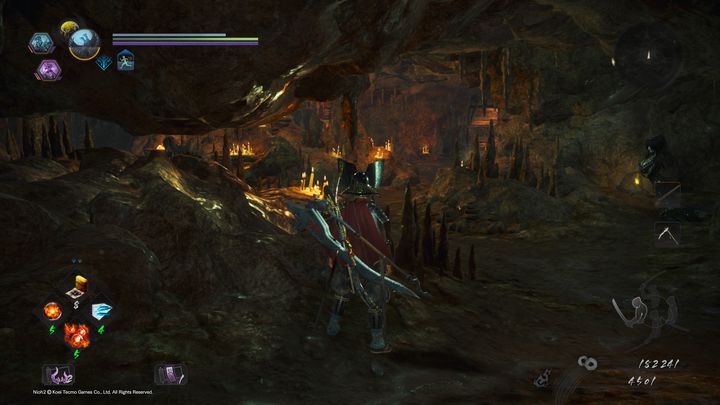 You will encounter another snake Yokai - it is better to lure one than to engage two at the same time. After defeating them, go further. You will find a ladder on the right - this is another shortcut. It leads mainly to the first shrine. Lower it, but we don't recommend going down. 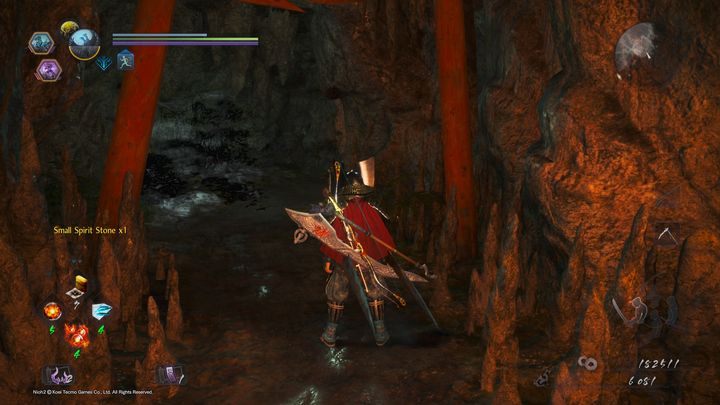 Step back and go to the right - you will find an entrance that has two lamps. A Yamanba is there - defeat her and continue going forward. 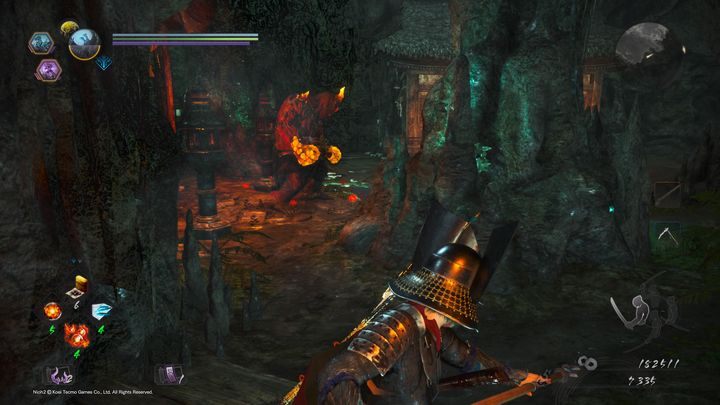 There you enter the Yokai Realm - you will encounter a large cyclops and Oni-Bi. The way to defeat a cyclops is to start a fight by shooting it in the eye from a safe distance - this is its weak spot. After that, you should attack the enemy from behind - remember to watch out for its punches. When you defeat it, you will unlock the last shrine in this mission.

After resting at the shrine, step back and head further into the cave, with a ruined red Tori gate nearby. Going down, you will have to fight with human opponents - one of them is a little stronger than the others, so be careful. 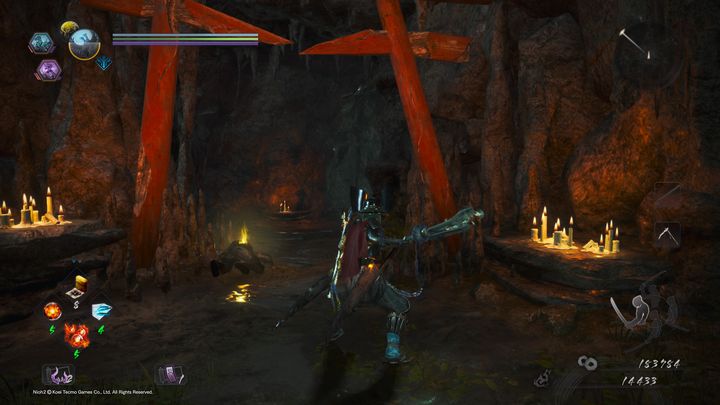 Also, a lightning bolt appears here from time to time. If it hits you, your character will be stunned for a while. You can use this lightning bolt to your advantage, as it also affects your opponents. Observe thunders on the ground - they inform you where the bolt will hit next. 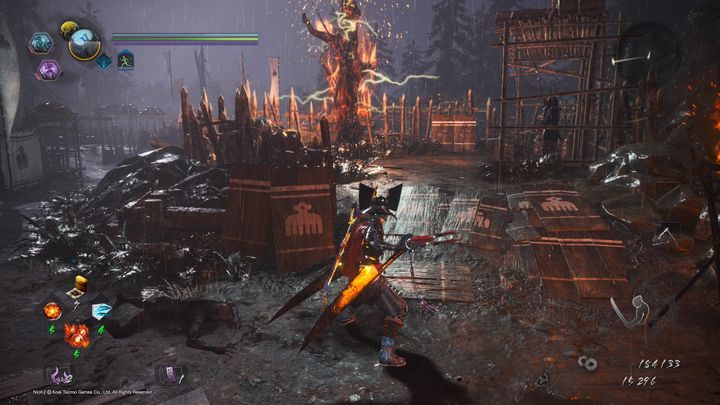 There are more enemies on the left - a hidden Kodama is standing behind the chests. You can approach it and send back to the shrine. The white marker on the mini-map shows the place where you will have a battle with Imagawa Yoshimoto, the boss of the location. The walkthrough for the fight can be found in a separate chapter of the guide.