The Viper sanctuary is the third main mission from the first region of NiOh 2. During this mission, we help Dosan repel Yoshitatsu's forces attacking his estate. On this page of the guide you will find a walkthrough for the location and the mission.

After starting the mission, first talk to your companion, then go to a nearby temple. On the left there is a staircase leading to the building. However, watch out for a small Gaki on the stairs. Defeat him, then go up the stairs. You will find yourself in the Yokai Realm. To clear a Yokai Realm building, you need to kill nearby Yoki (a large red Yokai with horns). However, beware of large amounts of Gaki in the buildings and beyond them. 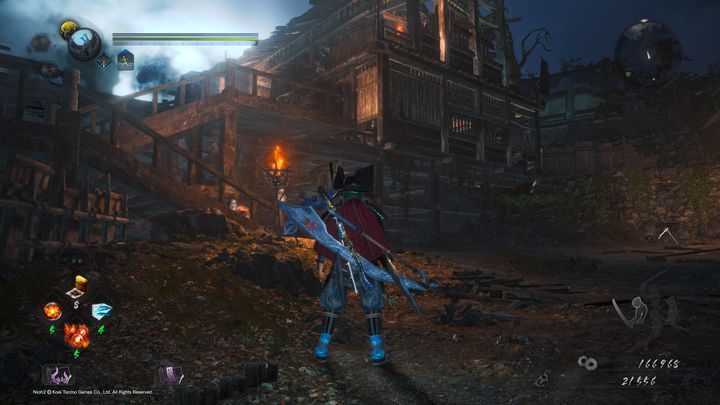 After you have defeated the Yokai and cleared the area, open the chest and climb the ladder. There are more Gakis waiting for you to defeat them. 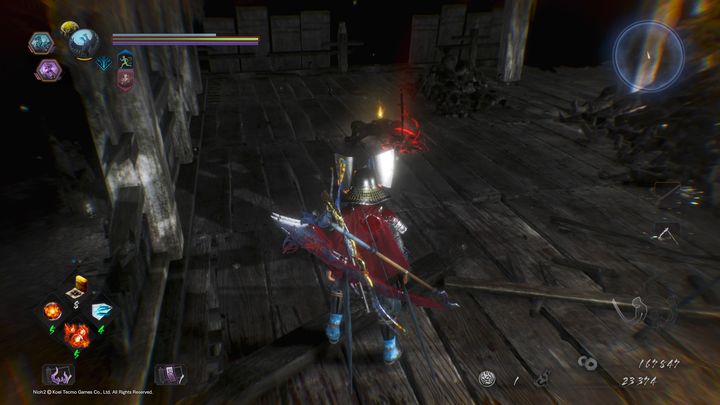 Be careful when approaching the item (shown in the screenshot), as when you approach it, a Gaki will jump on you, dealing a lot of damage. It is best to shoot it down with a ranged weapon. After defeating the enemy on the top floor, go down using the second ladder. 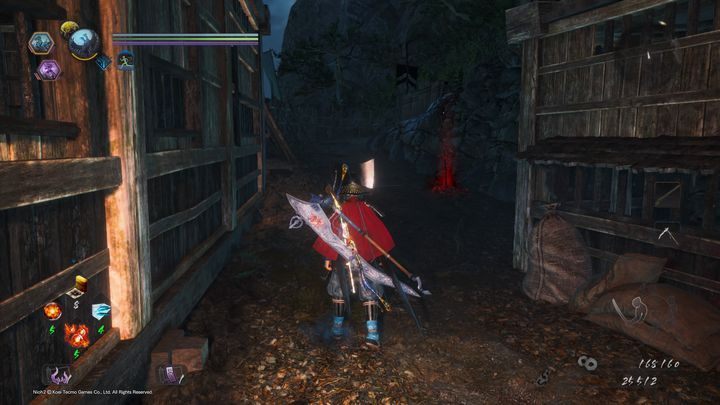 Descend down the ladder and turn left. Climb upstairs. After a while, you will encounter a resting enemy - you can slowly approach it and hit it with a powerful attack aimed at its back. 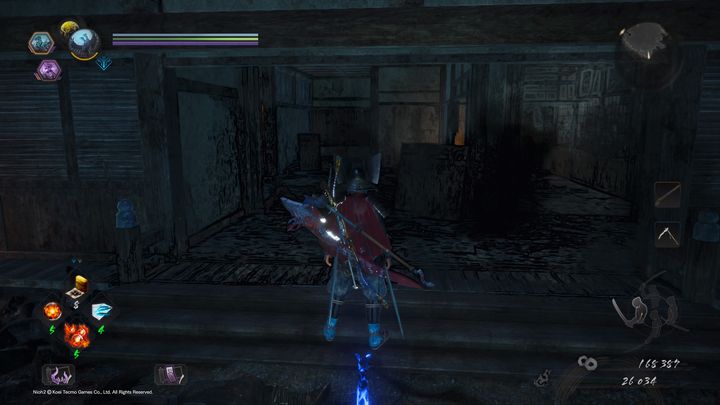 After you defeat him, go to a nearby building that is controlled by the Yokai Realm. When entering, remember that your stamina recovery is limited. If you have problems beating opponents, lure them out. 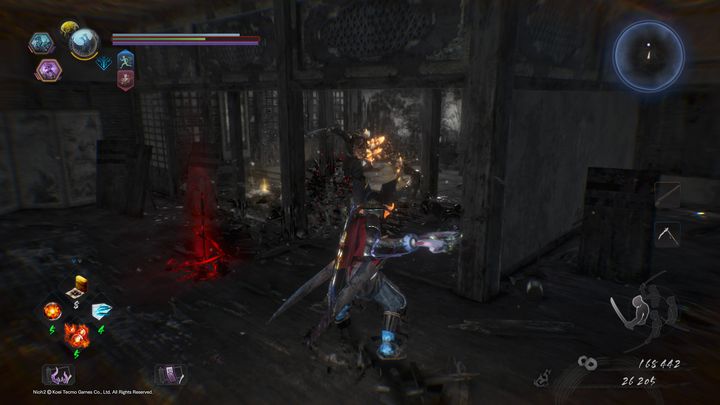 After defeating the enemy shown in the photo (on the right behind the cardboard door), you will free the building from the Yokai Realm. Watch out for it, as its Burst Attack and demonic hand are quite powerful. Find your way to its back and attack it. After you defeat it, stick to the right side and keep moving forward. There you will find another opponent, similar to the one encountered earlier. Exit from the other side of the house and go down. 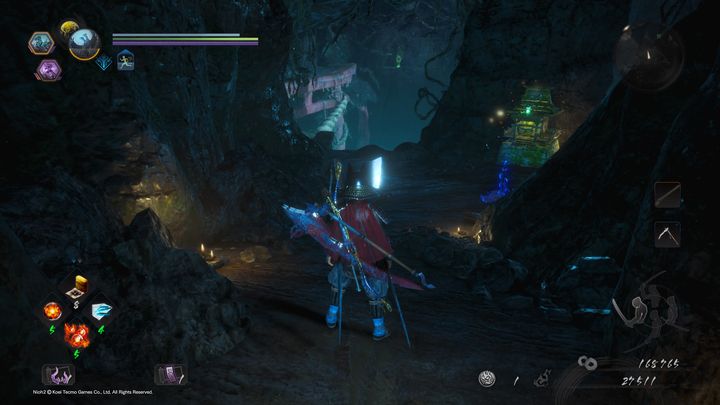 While descending, you will find a shrine on the right, as well as see the further part of the location, which contains much more Yokai than before.

After praying at the shrine, you can continue exploring the location. On the right side of the shrine, there is a locked door that serves as a shortcut. However, it will not open from this side. Go back to the shrine and continue deeper into the cave. 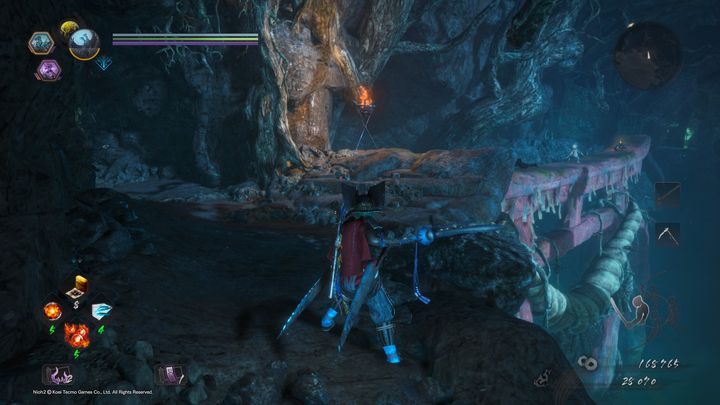 On your left there is a previously encountered opponent with a demonic hand, but before you proceed, go right where you'll encounter more Gakis. Watch out, as one of them is hanging on the edge on your left. Pick up the item and return to the enemy with the demonic hand. Defeat it, then keep going forward. 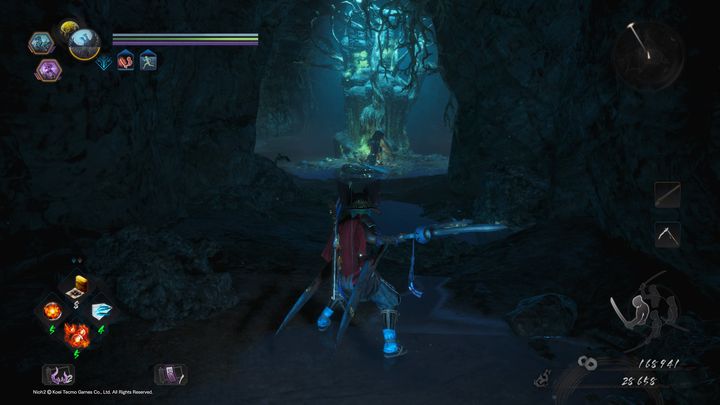 You will encounter a woman in the form of a snake. This is an opponent who uses her long tail to attack and its eyesight causes paralysis to your character. When she starts performing her Burst Attack, get behind her and attack. After you defeat her, go to the right side and continue moving forward. 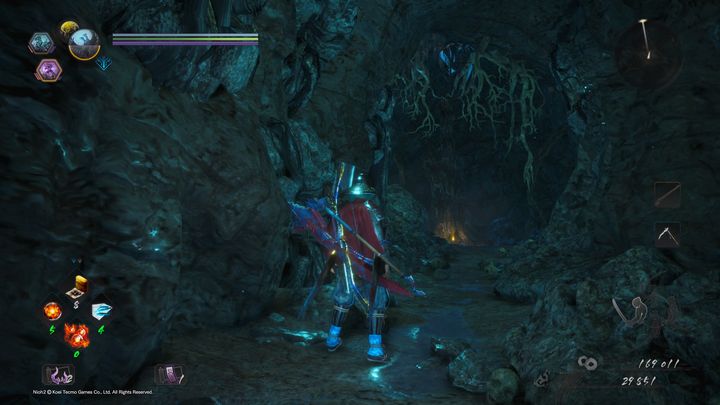 There is an item on the left side of the cave, but watch out, as it is a trap. Above, a snake woman is waiting for you, and as soon as you get close enough, she will jump on you and cause a lot of damage. 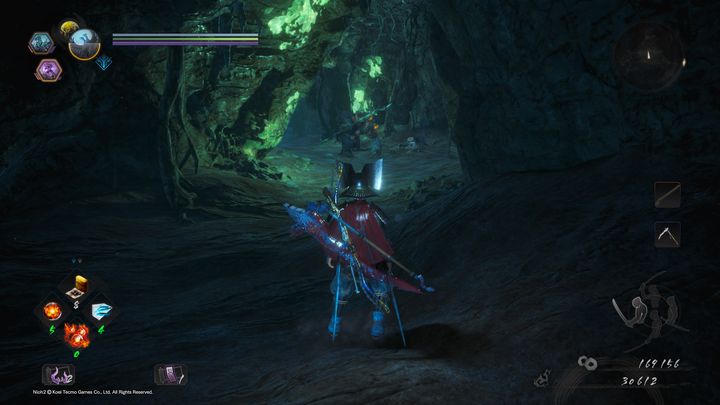 Further ahead, you'll have to face Enki and a few smaller enemies. Watch out for his jumps and long range attacks. It is recommended to shoot down its horn before entering combat. Descend - you'll find a hot spring on your left. 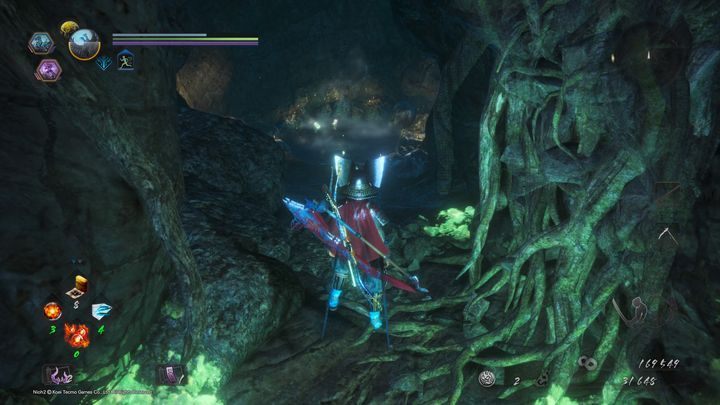 You can rest in it and restore your HP. Moreover, for some time you'll recover a small number of health points. After resting, move forward. 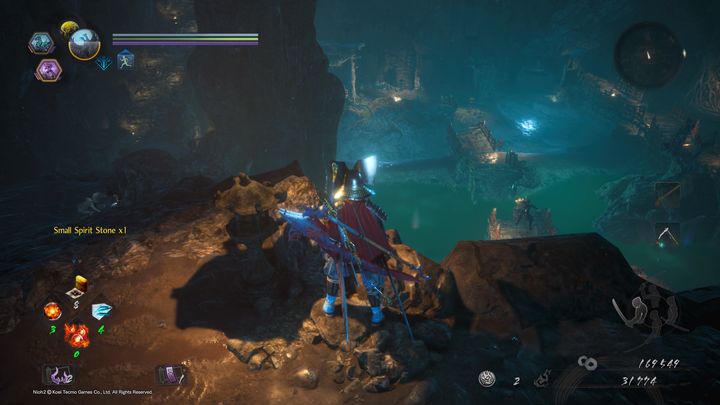 Go forward, but be careful - there are two Gakis, one scavenging on the surface and the other hanging on the edge. After defeating them, go to the top, and then to the bottom. The road to the top leads to the previously encountered shortcut (the one next to the shrine). There, you will mostly encounter human opponents. 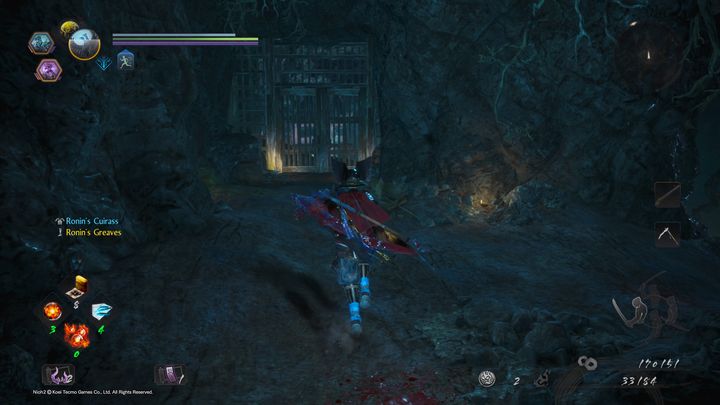 After you defeat all opponents, unlock the shortcut next to the second shrine. From now on, in case of death, you can use it to quickly return to the place where you died. Now go back to the edge that is on your left. 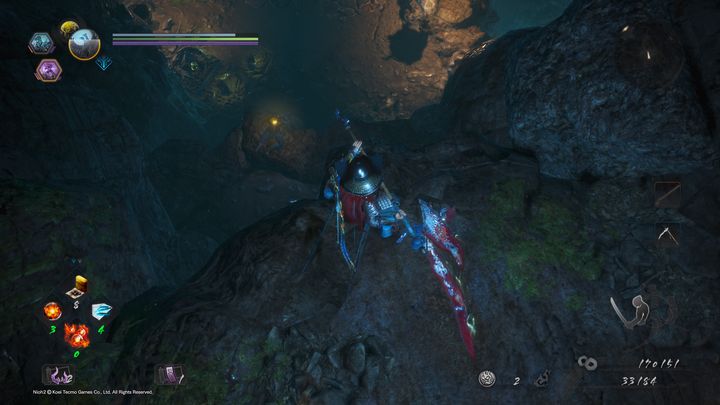 Jump down slowly, to avoid getting too much damage from the fall. After the jump, destroy the snake statue so that you clear the place of toxic water that deals damage when the status bar is filled up. 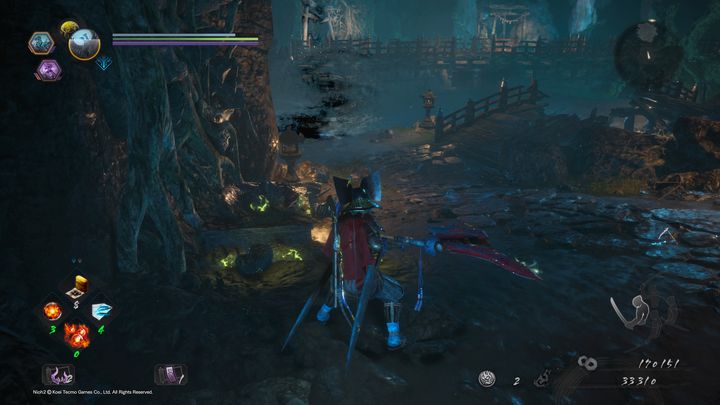 There is a Yokai Realm in front of you - a snake woman will emerge from it. Deal with her the same as with the previous ones. After defeating the Yokai, go right and reach the destroyed bridges. Once you reach the location, fight with Gaki and Yokai soldiers. 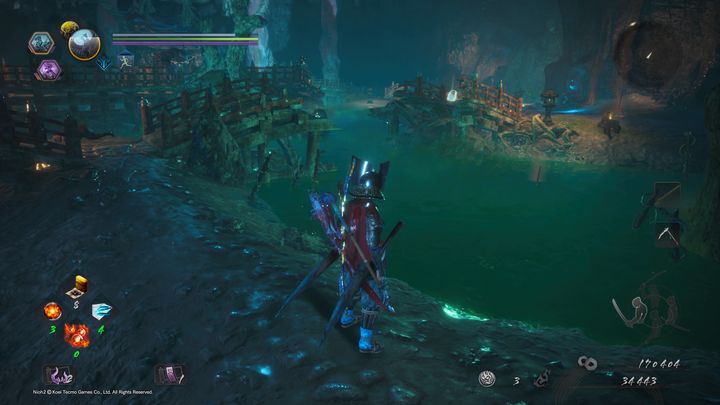 Try to cross the toxic water by dodging - to get rid of it, you need to destroy two snake statues. The first of the statues is located on the other side of the destroyed bridge (see above). 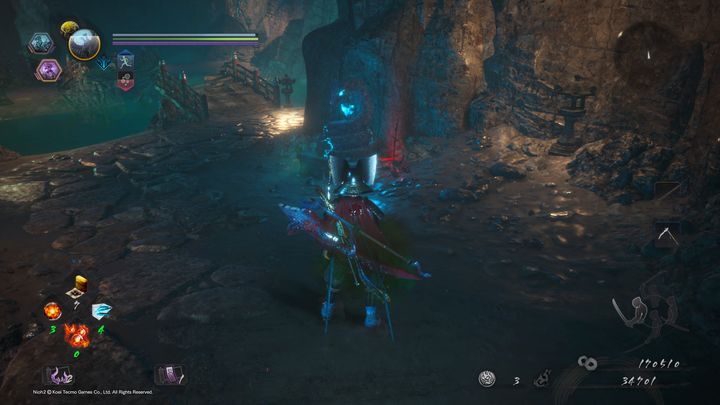 Deal with the enemies (watch out for the Gakis above, who throw bombs) and destroy the snake statue. Now the water should stop flowing in from one of the channels. The next statue is located in a cave. It is to the right of the snake statue seen in the screenshot (you need to step back a bit). 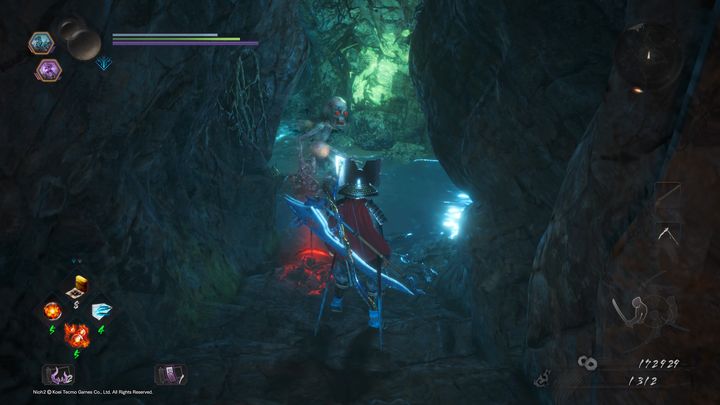 The cave is filled with various Yokai, including more powerful versions of Gakis or Yokis. There is a large Gaki at the very entrance of the cave - kill it. On the right you will encounter the Yokai Realm. When you approach, a Yoki will appear, watch out for its slow, but powerful attacks, and try to approach it from the back and hit it there. It is also best to wait for its attacks and strike after its combination has concluded. 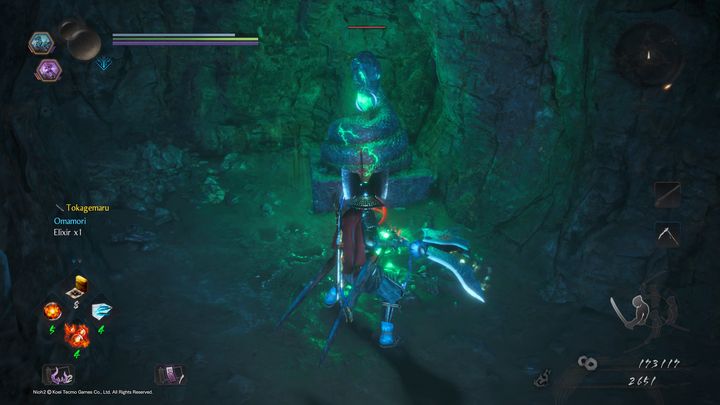 After defeating the Yoki, go and destroy the last statue, which will clear the site of poisonous water, which will make defeating Yatsunokami, the boss of the location, much easier (the area will not be filled with toxic water, which can make fighting the boss more difficult). After the statue has been destroyed, exit the cave and continue forward. Turn left and enter the undestroyed bridge. There is a boss encounter on your right. On the left is the far side of the bridge, where Enki and a soldier with the demonic hand are located. Continue to the other end of the bridge - you'll encounter a Yokai Realm, from which an Ipondattara will emerge. Watch out for its quick attacks and jumps in your direction. It is best to keep a distance and allow it to make attacks, and then counterattack at the end of its attack. 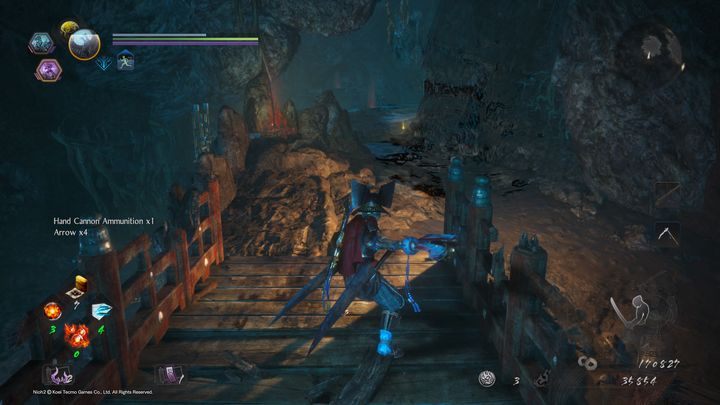 After defeating it, approach a ladder located on the left of the completed section of the bridge. Lower it to unlock another shortcut. 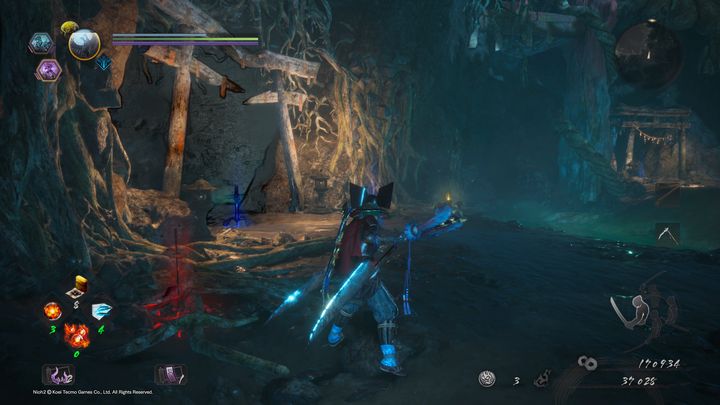 Descend down and go to the right side of the ladder. There is a Yokai Realm in the cave on the left (see picture). Inside you will find a shrine, but it can only be activated once you clear the Yokai Realm. To do this, instead of fighting everyone in the middle of the room where you'll be vulnerable due to lowered stamina recovery and Yokai who have more power, approach the snake statue. Destroying it will clear the place from the Yokai Realm and reduce the stamina of the remaining enemies. 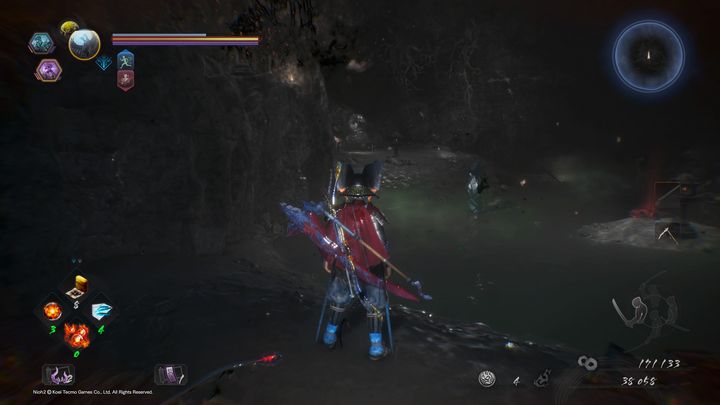 In the area, you can encounter a woman in the form of a snake, a Yoki, one Gaki, a smaller Umi Bozu and a shooter with a demonic hand. It is best to take care of the shooter from a distance first, then turn to Yoki. Only then, you can take the snake woman and remaining opponents on. Rest at the shrine. 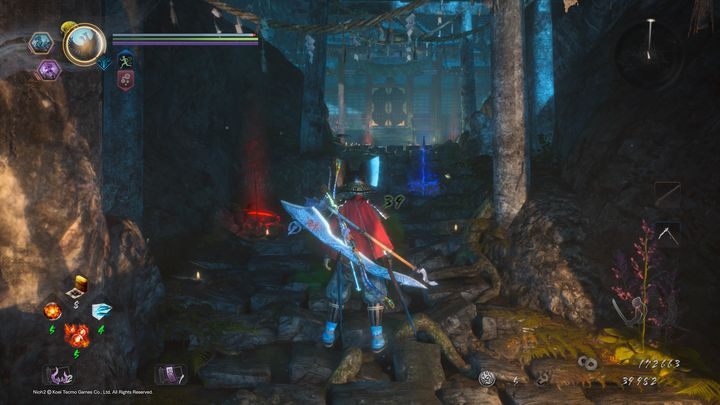 Watch out for a snake woman patrolling the area. It's better to skip her and go straight to the building. Fighting Yatsunokami is described in a separate chapter of the guide.