The Beast of Smoke and Flame is the second main mission in NiOh 2. Its objective is to check the events that take place on the Tatara mountain. On this page of the guide, you will find a walkthrough for this mission.

Talk to your companion and then go to the first shrine. Immediately behind it, you will encounter the first two opponents. Focus your attention on the enemy with more armor - watch it and dodge its attacks. 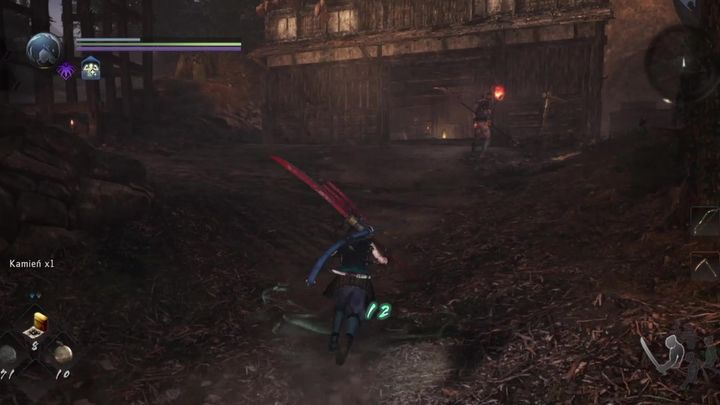 The gate behind them is closed, you must follow the path leading to the village. The village is built like a circle, so it doesn't matter which path you choose. However, it is better to go right at the fork. Going this way, you will encounter two opponents, including an archer patrolling the area - wait until he turns his back on you, and attack the other. This way you minimize the risk of fighting two at the same time. 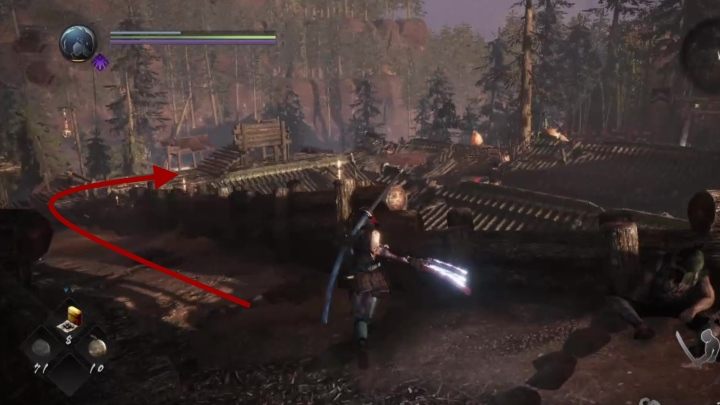 After dealing with them, go up the stairs. At the top, you can go right and face a Revenant. The entrance to the roof is opposite the building with the stove. Go through it. 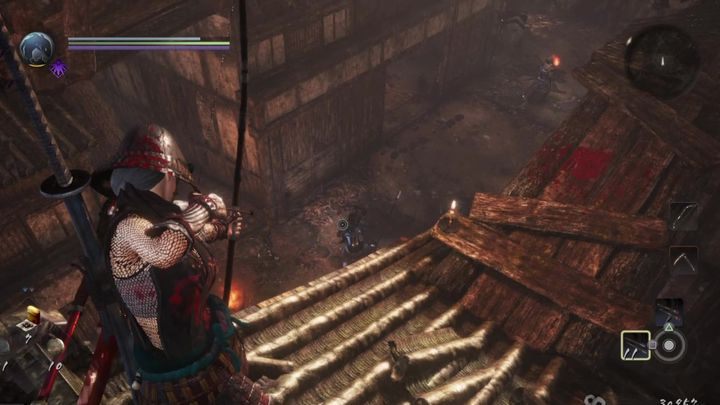 Then you can also shoot two more enemies. First, shoot in the head the Rogue crouching near the corpse. This won't kill him, but it will take most of his health points. That enemy will go in your direction (if you dropped the ladder) - you can easily finish him off. The second target is a less armored enemy patrolling the area. Thanks to this solution, you will only face one opponent in a direct battle. 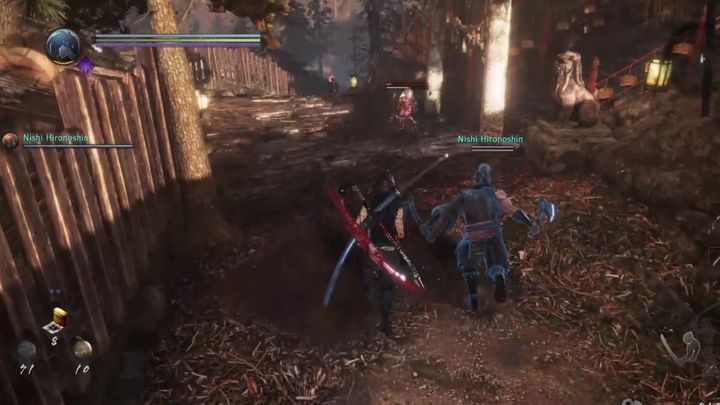 After that, follow the path that goes near the place where the archer stood. In the cottage on the right, you will find a grave of an ally spirit, which you can summon for help. Going further down the road, you will encounter a Rogue sitting at the stairs - eliminate him but don't head to the building yet. Instead, go straight, kill the next opponent and open the gate at the end of the path.

Time to face Ippodantara. Ippodantara is a fast opponent whose attacks are mostly based on blows dealt with an axe. The easiest way of defeating it is letting it attack. If you see an incoming strike, dodge but stay close to the opponent, because it is vulnerable to your attacks for a brief moment after its attack. 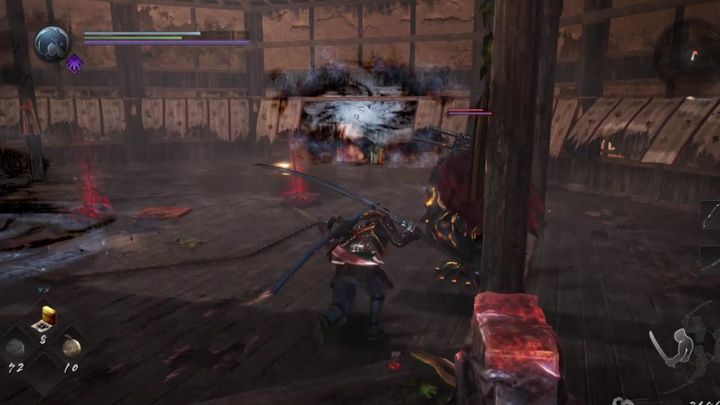 Once the battle concludes, a door leading further ahead will open. Go down the stairs to find yourself in a cave. There you can talk to a woman sitting by the fire. Continue down the only available path. You'll encounter two Gakis before the next shrine, but fighting them shouldn't cause you any difficulties.

A long sequence awaits you after visiting the second shrine. The first opponent you'll encounter is a Sohaya. Sohaya has the ability to cast healing spells which may prolong the encounter. Fortunately, you can use the fire located next to the building entrance - if you push your enemy into it, the fight will end instantly.

Further ahead, you'll encounter a group of opponents. There aren't any new types of opponents among them, so you already know how to defeat each opponent. However, the number of encountered opponents may cause problems. You can use stones to lure opponents one by one and deal with them when they are away from the rest of the group. 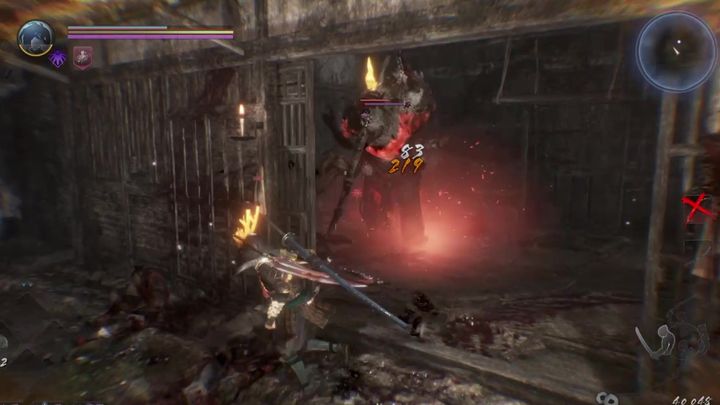 On the other side of the bridge, you will encounter a Native. Do not underestimate him, he is agile and can cause significant damage. Another Ippodontara awaits you along the way. The enemy is placed in an narrow passageway - lure it to the plain located behind it, so you'll have more space to conduct attacks from different angles, and have the ability to dodge enemy attacks. 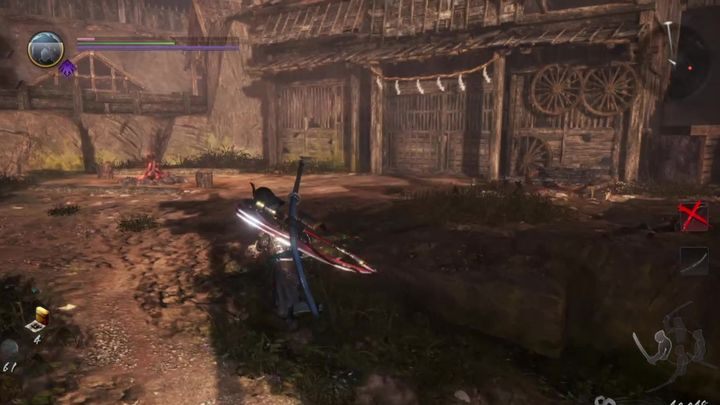 Further ahead, you'll encounter another Sohaya. The fight will be similar to the one from the beginning of the sequence. Continue forward to reach a gate - before you enter it, go left. You'll encounter a ladder that can be lowered. This way, you'll be able to climb back up if you've fallen down from the ledge. 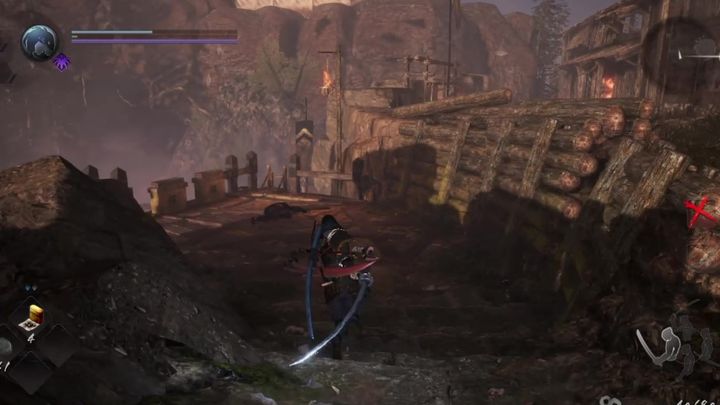 At the entrance, you will encounter two Rogues. Kill them and enter the building. First, take care of the Gakis located in the room left of the entrance. Now, use the ladder located opposite to the entrance. You'll encounter another Gaki, who has to be eliminated. Push the container with water located nearby down.

Continue by descending to the lowest level and use the ladder at the end of the room. This way you'll gain access to an upper level. Deal with two opponents that appear before you. Start by taking care of the archer. This way you will avoid getting hit during the battle. Push the water bucket down and continue to the higher level. Once you're up there, you'll have to face two Natives, and then another Archer and a Gaki (be careful to not provoke a fight with both groups at once). Drop another water bucket. 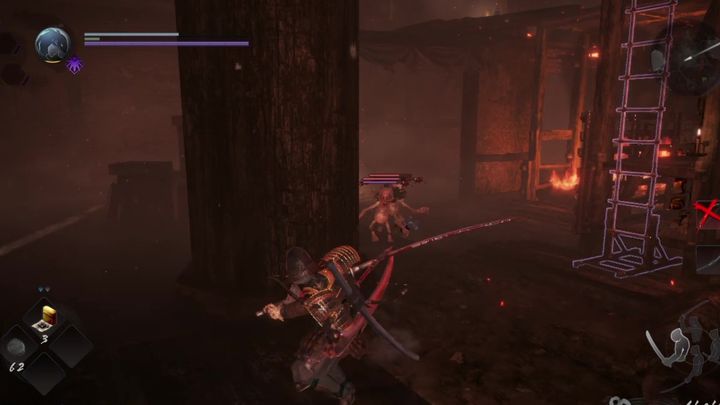 Descend down the ladder to the lower level. There is another duet - an archer and a Gaki - ahead. Defeating them shouldn't pose a problem. Moreover, the body next to them contains a key to the gate which will be needed in order to complete the mission. Now all you have to do is to descend to the room with the shrine.

At this stage, you only need to leave the room with the shrine and continue to the gate. At the gate, you'll face Enenra. The walkthrough for the fight can be found in a separate chapter of the guide.