The Mysterious One Night Castle is the second main mission of the second region in NiOh 2. This page has a walkthrough for this mission.

Talk to Tokichiro and then go further to get to the first shrine. You now have two paths - the one on the left is a shortcut that you will unlock later, so go right. Two soldiers are sitting under the stone bridge. It is best to shoot down one of them and fight the other one on one. Another solider is on the left - the enemy is patrolling the area. You can hide in the vegetation and stealth kill him. 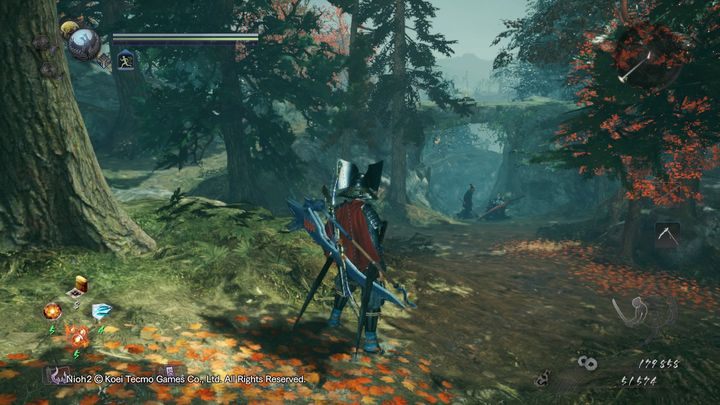 Go up the stone bridge - you will encounter another soldier. Kill him and jump down. A Tengu is on the right - this road leads to the boss. Yokai Realm is on the left - it is guarded by Waira. 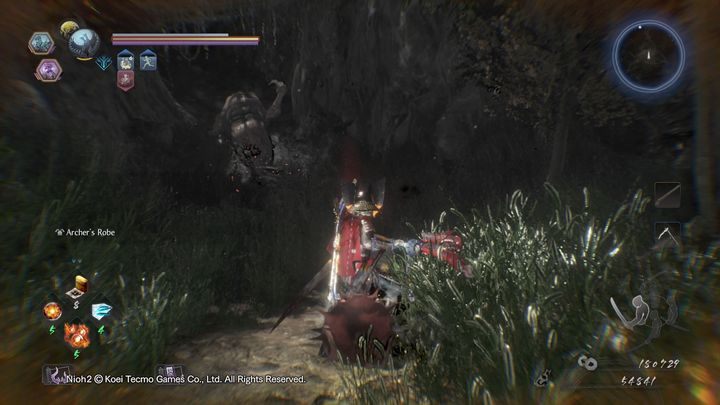 This is a large-sized Yokai that attacks mainly with its large body and legs. Its weak point is the belly, where the Amrita is located. Both roads lead to the same point, that is, beyond the bridge. 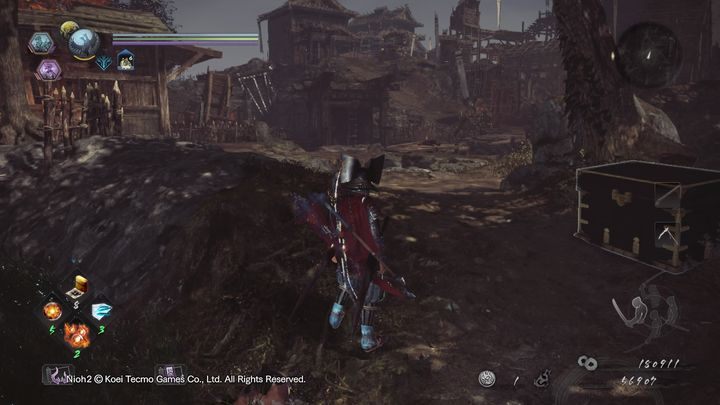 As soon as you get there, open the chests with loot. On the left, right beyond the bridge, you will find a building. Beware of Yamanba. Defeat her and proceed forward. 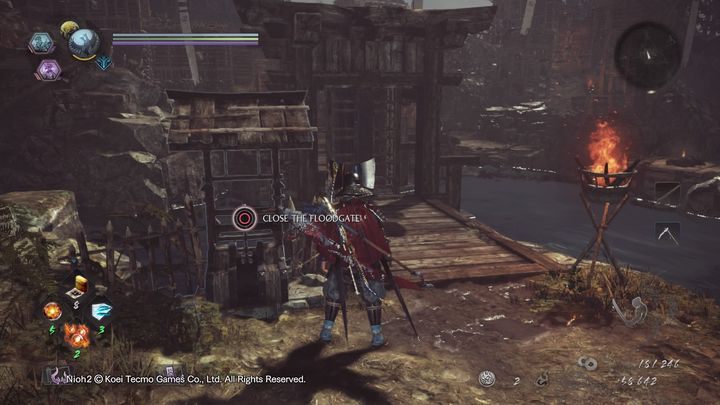 Go to the switch and close the airlock. This way, you will open a passage leading further, and the water on the right will disappear - you can go down and get some loot. However, beware of the snake Yokai and the smaller Umi bozu (they are vulnerable to fire). The second shrine is in front of you, on the other side.

There are two paths coming out from the shrine. The path on the left is a shortcut but you can't use it yet. The right path leads further into the location. Hachisuka Koroku is near the shrine. Talk to him - he will help you on your journey. Go right and move forward. 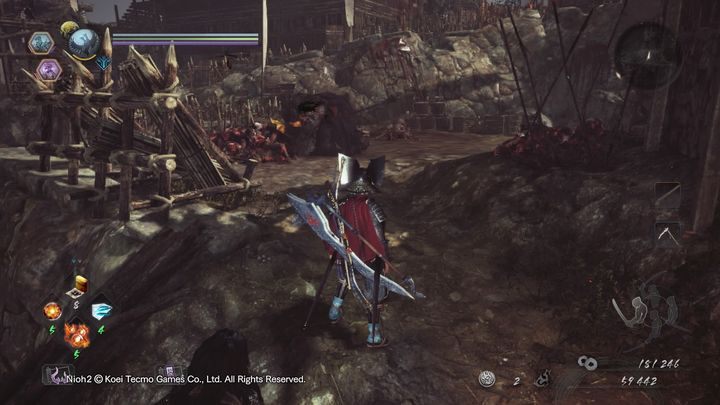 There you will encounter other opponents, such as Enki, Gaki, and a soldier with a demonic hand. It is best to first shoot the Gaki or the soldier standing on the right. Once they are dead, deal with Enki. With Hachisuka's help, you shouldn't have much trouble defeating them. Go further. On the right, you have human soldiers - the road there leads to the top of the building. On the left, you have Yokai Realm with Waira inside it. Thanks to your companion, you shouldn't have any problems defeating this enemy. Don't stand behind it all the time, -this enemy can roll over on its back and crush you. After defeating it, go straight. There is a gate that can be opened only from one side. 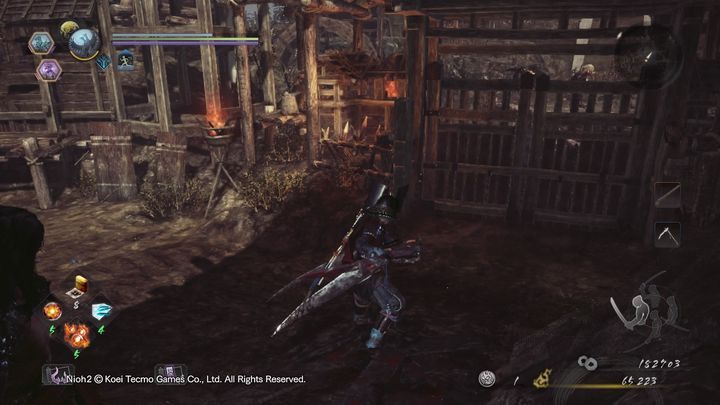 As soon as you open the door, cross the wooden bridge. Yamanba and a soldier are waiting on the other side. Shoot down the soldier and defeat the other enemy. 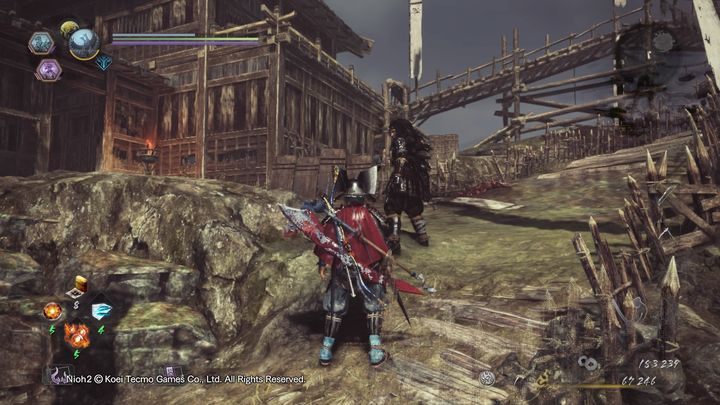 From here, you have an entrance to the building located on the left. If you go forward, you will find a switch that opens the gateway and a shortcut to the second shrine. You can rest at it (the opponents will respawn) and return to the place from the photo above. 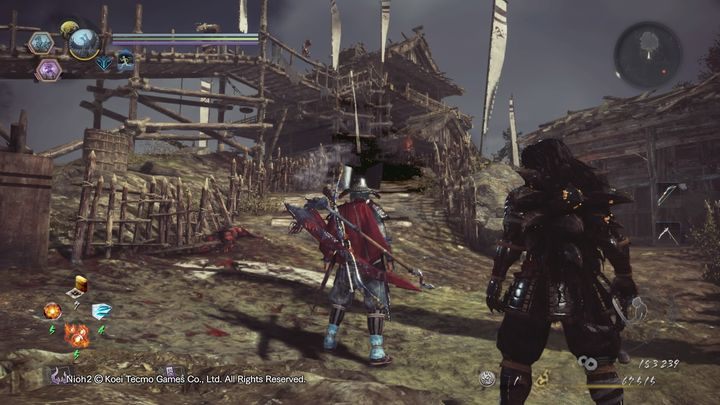 Go up and you will enter the Yokai Realm. Enki is on the right side of the building. On the left, you have a soldier, a Tengu and a few Gaki standing near the chests. Defeat Tengu (located farthest to the left) to purify Yokai Realm. It is best to deal with each enemy individually. The NPC will help you a lot here. After you defeat everyone, enter the building on the right. 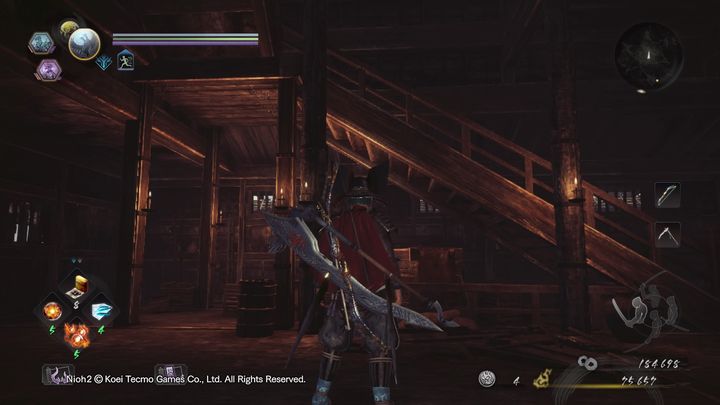 Climb the stairs to the top and defeat a soldier Yokai. Next, you have to go outside. You are on a wooden bridge. 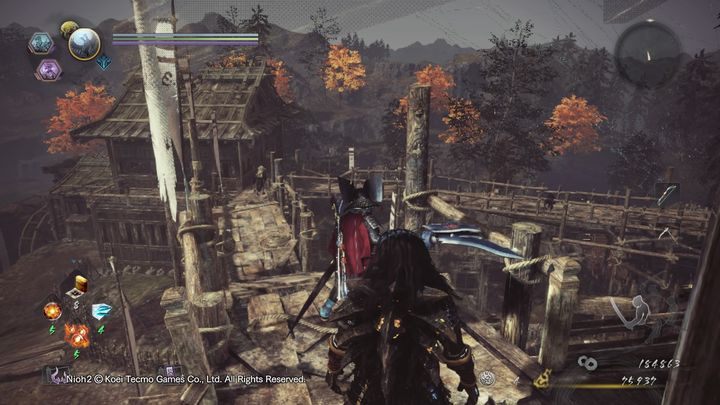 Go ahead and away from the building. There are two Yamanaba in the building in front of you. Deal with each enemy separately. Enter the building and jump down or slide down the ladder. 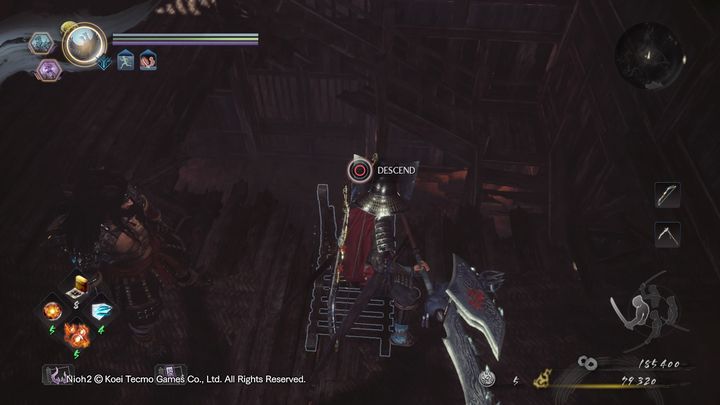 There you have a door that opens the shortcut to the shrine. Open it and head the other way to reach the lower floor of the building. 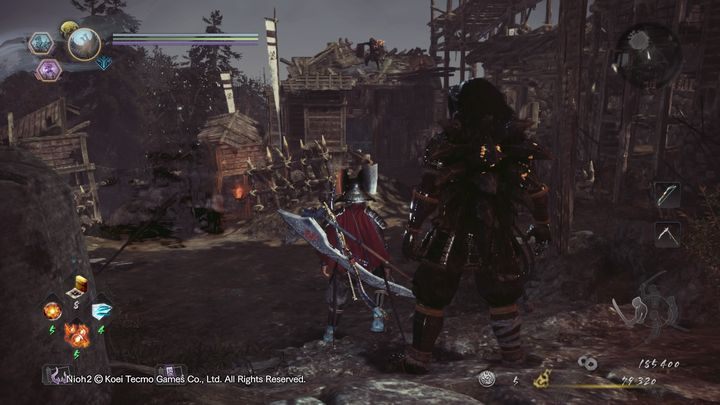 A Yokai soldier is standing on the right, on top of the rooftop. He will shoot at you from that place. It is best to shoot it, and then go to tge place where you can see a small field of Yokai Realm. Enki will jump out of it. Kill it and then move forward. 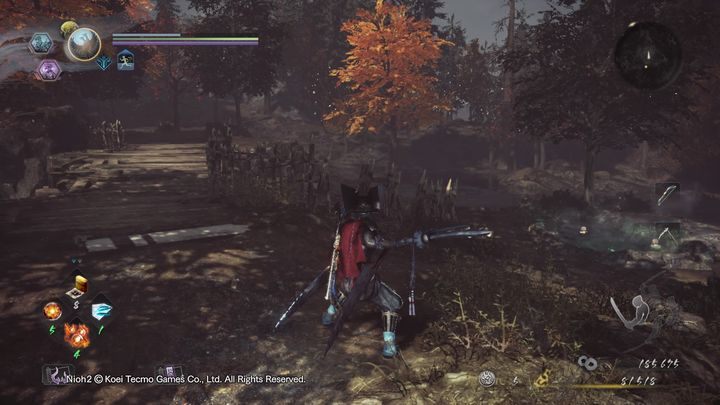 A hot spring is on the right - use it to restore health. The NPC will leave you here - you must go alone. You can still talk to him. Cross the wooden bridge and keep an eye on the two Gaki. 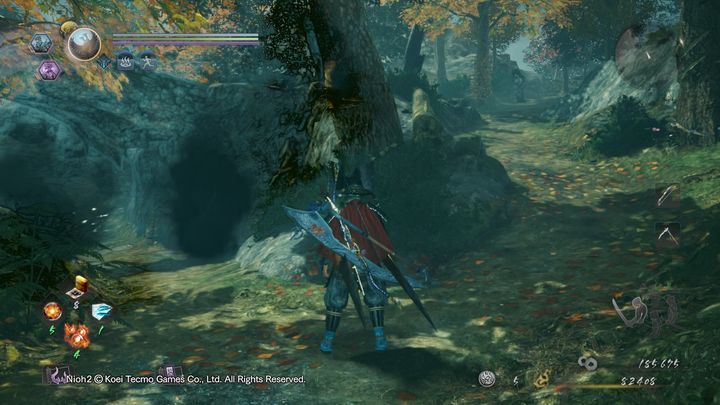 We recommend going left first, to Yokai Realm. As in previous cases, it is recommended to lure individual Yokai - they have the advantage here. Start with Gaki located at the top. This enemy is an easy shooting target. A little further away you have a snake Yokai - beware of its paralysis and tail attacks. Going up, you will encounter Karakase, a Yokai umbrella. 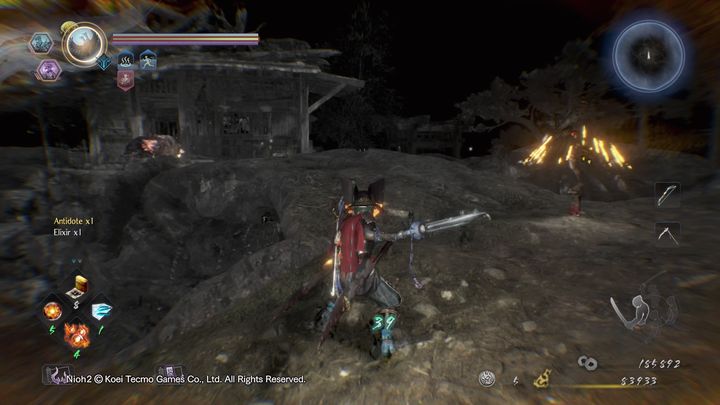 This enemy doesn't have a lot of health, but it does a lot of damage. Try to approach it as quickly as possible and attack it - the enemy should quickly die. Watch out for its long-range attacks. The last Yokai are a soldier sitting on a tree and Enki searching something near the building. Take care of the soldier first, and then attack Enki. 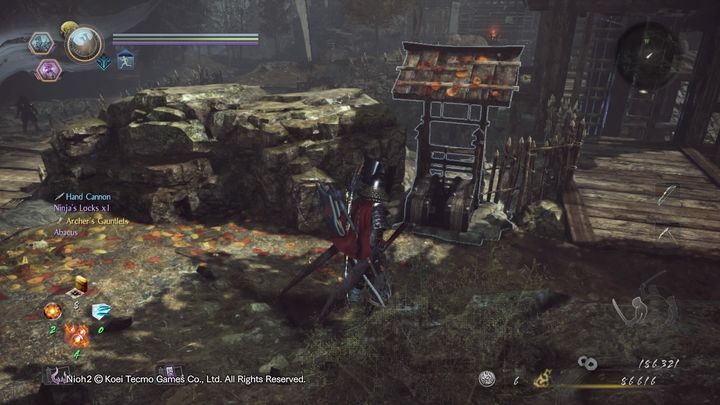 Another gateway is behind the building. Unlock it and go down the ladder - the water won't stop you. Activate another shrine. 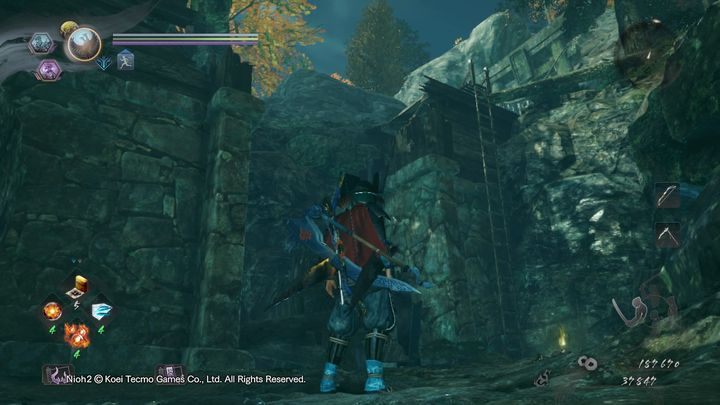 Go up the ladder. From there, you must move forward. You will encounter Sudama - you can discard an item and get something else in return. 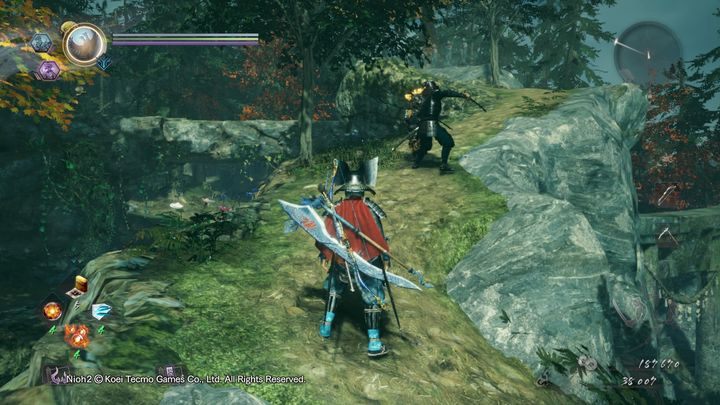 Defeat the Yokai soldier and climb to the top. Jump down on Gaki and kill him with an air attack. Cross the stone bridge, go down and then left. Kill Gaki and a soldier. 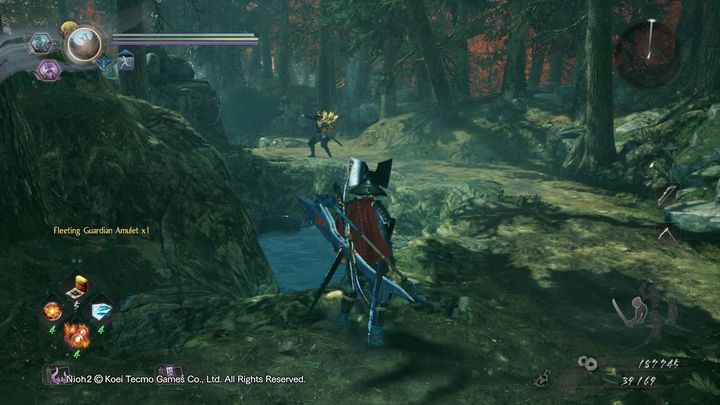 Go ahead - you will encounter another soldier and Yamanba. Take care of the soldier first. Be careful not to fall into the water. Keep going straight. 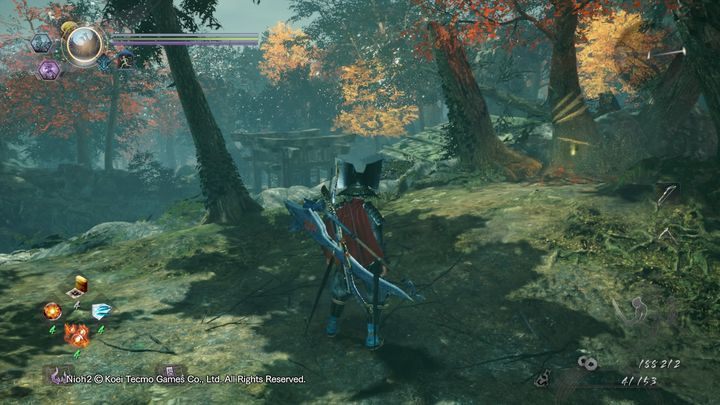 You can now select one of the two paths. The right path leads to the location's boss, Kamaitachi. A shortcut leading to the first shrine is behind the tree on the right. The fight with Kamaitachi is described in a separate chapter. 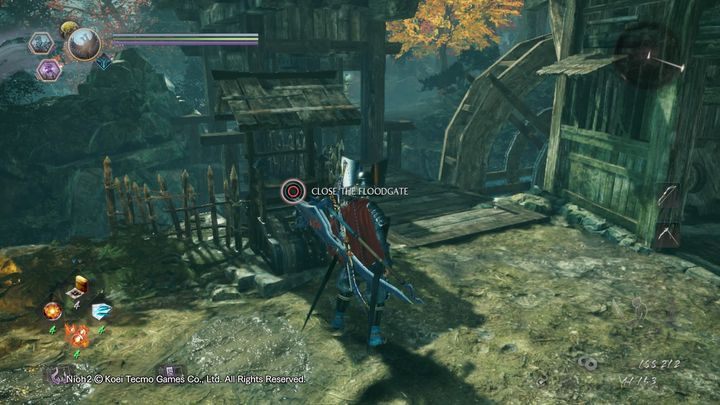 Open the gateway and rest at the first shrine. The wooden building on the right has a hot spring - relax and restore your strength there.