This page of the NiOh 2 guide will show you how to defeat Mezuki, one of the bosses. This page contains a number of tips on how to effectively defeat this boss. 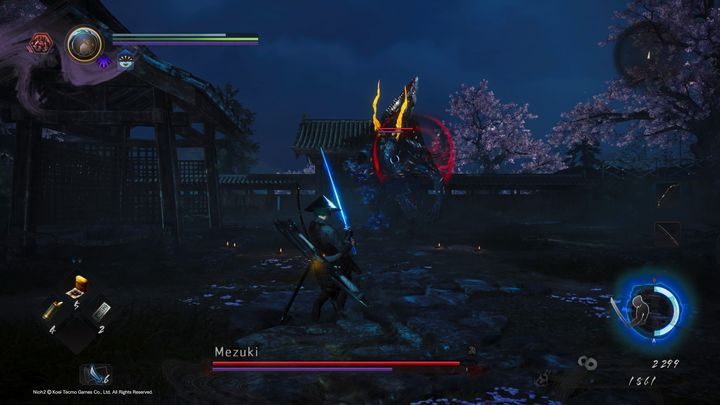 Mezuki, a demon with a horse's head, is the first boss in NiOh 2. It plays the role of a tutorial boss, but this doesn't mean that you won't have problems winning this fight. Mezuki's attacks have a very long range. Its weakness is water, so it's good to stock up on at least water talismans before a fight. Also, try to attack it from the back. 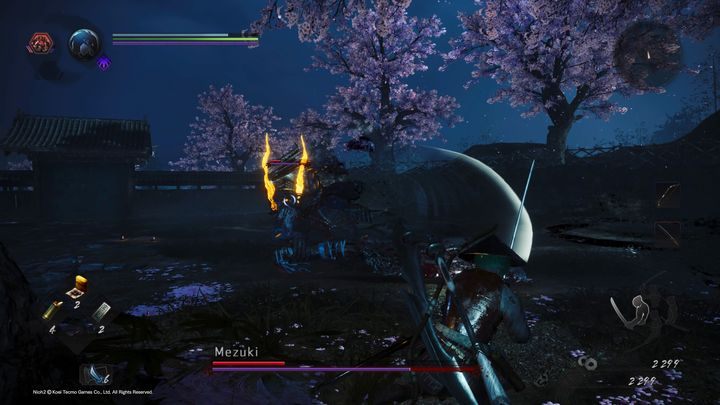 When fighting with Mezuki, it is better to keep a close distance. The boss's attacks have a very long reach so there is no point in attacking the enemy from a distance. Mezuki can miss us with its wide swings when we are very close to it. In addition, its attacks are classified as slow, so you don't need to react quickly to them. By fighting the boss at close range, we provoke it to use a grab signaled by a black-and-white flame similar to that created by the Yokai land. When you see that the boss is about to use the grab, dodge to the side or move away from it to a safe distance. This attack isn't fast.

When you see a red flash, be prepared that Mezuki will charge in your direction. It is best to make a successful Burst Counter. This attack is easy to counter - use Burst Counter when Mezuki is very close to your character.

At medium range, the boss can swing the weapon up to three times, once to the left, once to the right - these wide swings are slow. If you have trouble dodging them, reduce the distance or hold the block after dodging. Sometimes, however, the third attack can be a special move called Burst Attack (signaled by the previously mentioned red flash). The boss raises the weapon up and hits the spot where you are standing with a huge impact. You can avoid it or make a Burst Counter. 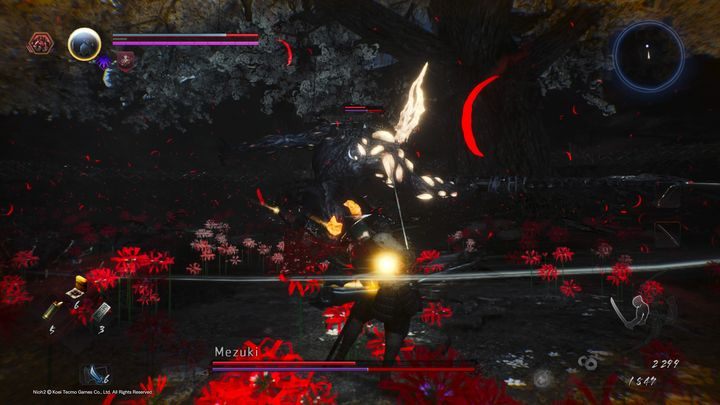 The moment you reduce its stamina bar to zero, the boss will become vulnerable to all attacks for a brief moment. Use this opportunity and go on the offensive. However, after some time, Mezuki will restore its stamina and move to the Yokai land. The location becomes black and white - Mezuki gains strength and new attacks.

One of its new moves is a long-range attack. Mezuki roars and shoots 3 black sprites that follow the player. Avoid them by running to the side - these projectiles have good tracking.

Mezuki also has a second long-range attack. The boss swings the weapon twice, creating shock waves on the ground. These attacks move in a straight line, but they are quite fast, so it is best to avoid them by rolling to the side.

Its special attack, signaled with a red flash, has received a different animation. The boss glows red and raises its weapon high. Then, it hits the ground three times. R2 + circle should do the trick, however, if you are late with the counter, quickly dodge to the side or block the rest of the attacks.

If you don't feel up to it and Mezuki is causing you problems at this stage, it is best to keep your distance until you are out of the Yokai land. Until then, avoid its long-range attacks and when the boss gets close, it will probably want to use a Burst Attack (special red attack). Perform a counter and then keep attacking until the boss regains balance.