On this page of the Nier Automata game guide, you will find a description of Route C and D endings. You'll find out how to beat 9S or A2 in the final fight and also how to unlock major endings C, D, and E. 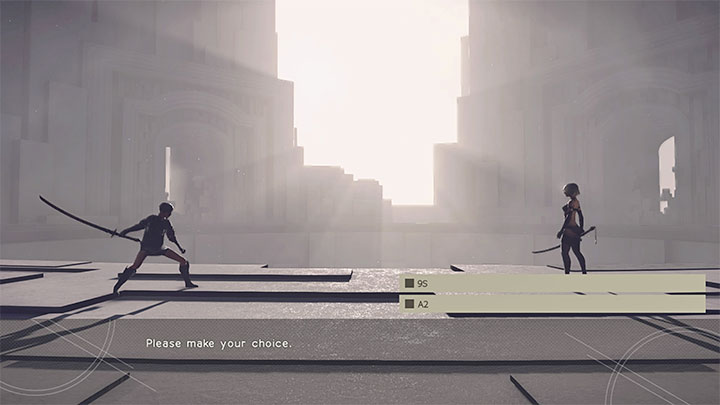 As a reminder, Route C and Route D covered chapters 11-17, and you could play them after completing Route A and Route B. You will be able to choose the ending in the Chapter 17 finale, and your previous choices and progress don't affect events in the end.

You can choose to end the entire game for the first time after dealing with KO-Shi and Ro-Shi bosses in Chapter 17. 9S and A2 will face each other and have hostile intentions. Now, you have to make a choice and take side of A2 or 9S. This choice will force you to join the fight against 9S or A2. It will also affect whether the C or D ending will be unlocked. 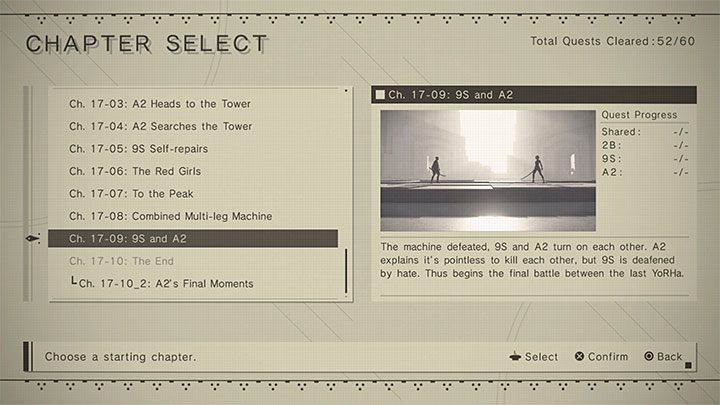 After you unlock and watch one of the endings, the Chapter Select option will be available, allowing you to repeat the completed chapters (whole or only fragments of them). That will allow you to experience the second of the main endings and unlocking the special ending E. After loading the save from the main menu, select the Chapter Select option and then chapter 17-09 (picture above). This will allow you to return to the point of choosing the hero with whom you are going to ally. You will be able to choose differently than during the first time.

The main endings of Route C and Route D involve the risk of losing your saves. We described this in more detail in the section Ending E -how to unlock?, regarding the "final" ending available after watching the C and D. Before you go on to ending E, make sure you can create a copy of the game state. You can find information on how to do it on a separate page - Saves backup - how to create?. It can protect you from losing the progress of the last few dozen hours of the game.

Ending C - allying with A2 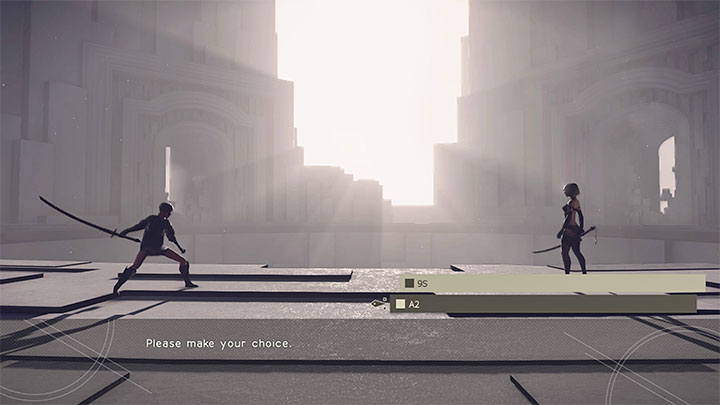 To unlock this ending, you have to choose A2 to play the finale of the campaign. This is the second option and, in addition, you have to confirm the choice (Yes). 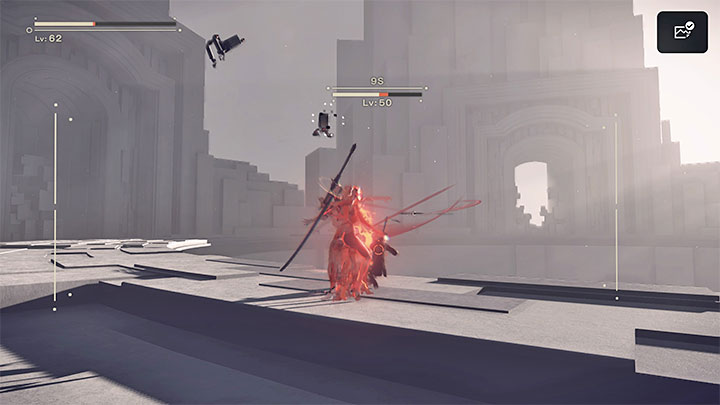 Taking the side of A2 means that 9S will become the final boss of the game. You can attack 9S in hand-to-hand combat or at a distance (be sure to lock the camera and use offensive pod programs). The boss uses ranged attacks (and also pods), so be prepared to use dodges frequently.

Controlling A2, you can attempt to activate the berserk mode, although since the 9S is a fast opponent and generally avoids close combat, it may be difficult to use this mode. 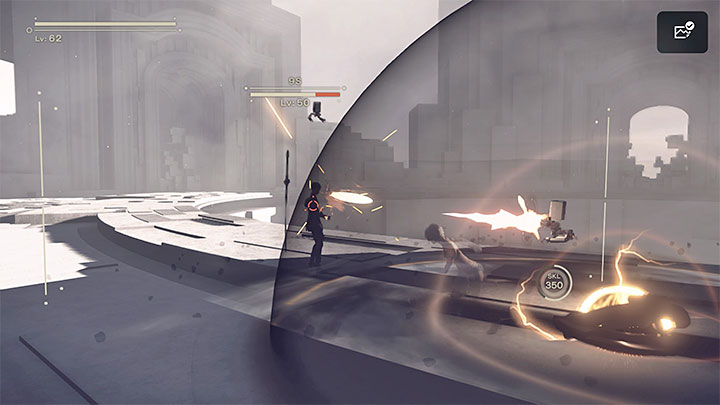 9S can create a dome able to slow down and limit the movements. Try to move away from the place where it will appear (the attack is indicated). If it's too late for that, focus on getting out of the dome as quickly as possible. 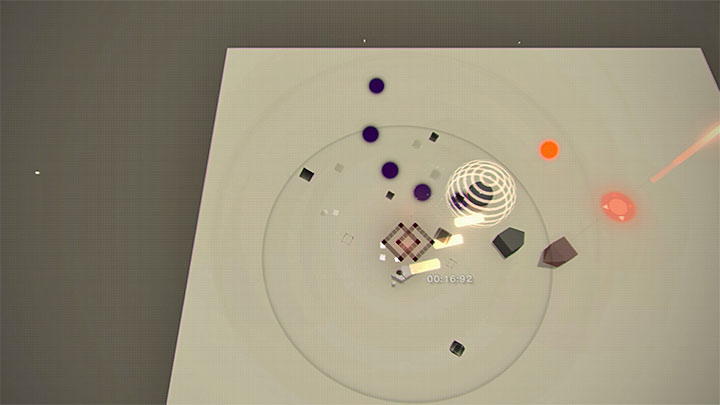 Boss may also attempt to hack A2. Each time you will have to complete the mini-hacking game to protect yourself from receiving damage.

One of the rarer 9S attacks is generating a shock wave that you should try to jump over. 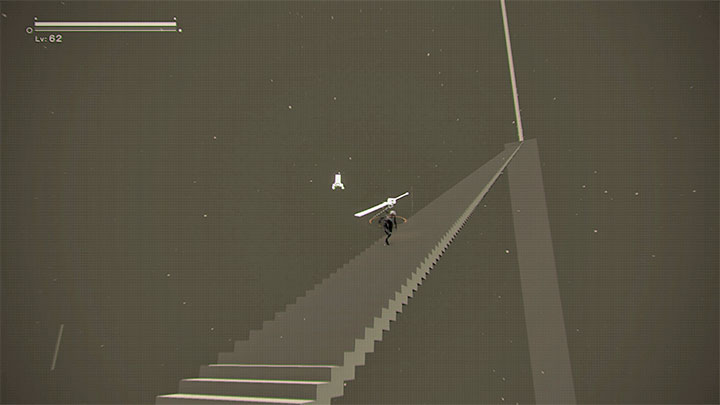 After 9S is deprived of his entire health bar, you have to complete an additional scene in cyberspace. It does not involve any fighting. You just have to follow the only possible path using different stairs along the way. The "exit" leads to a longer staircase from the picture above. 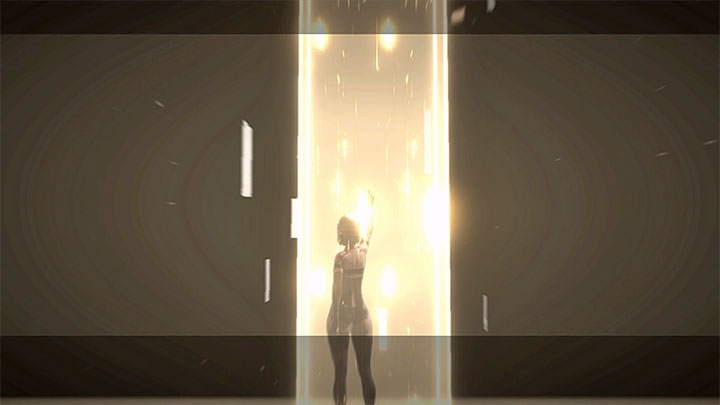 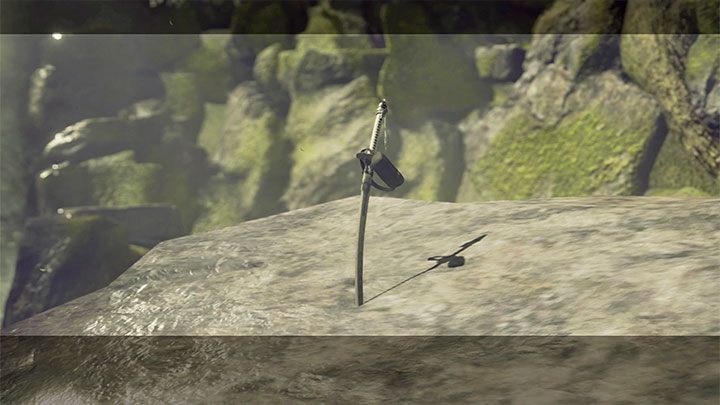 The game will display the C ending and the end credits. You will also receive a trophy Beautiful World and bonus items:

Don't forget to confirm to save the game after the end credits to be able to select this save from the main menu and use it to unlock other endings. 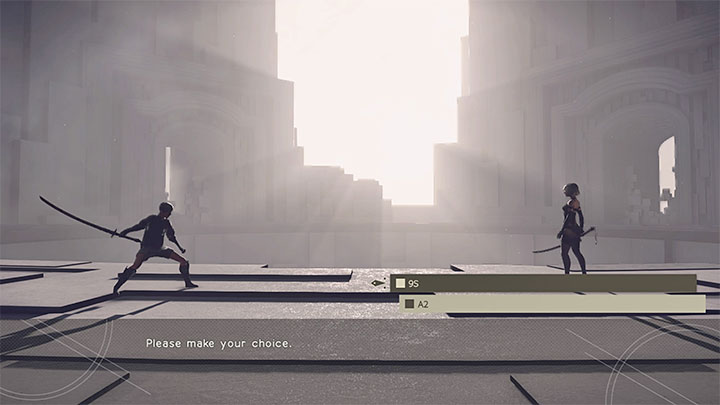 To unlock this ending, you have to choose 9S to play the finale of the campaign. This is the first option and, in addition, you have to confirm the choice (Yes). 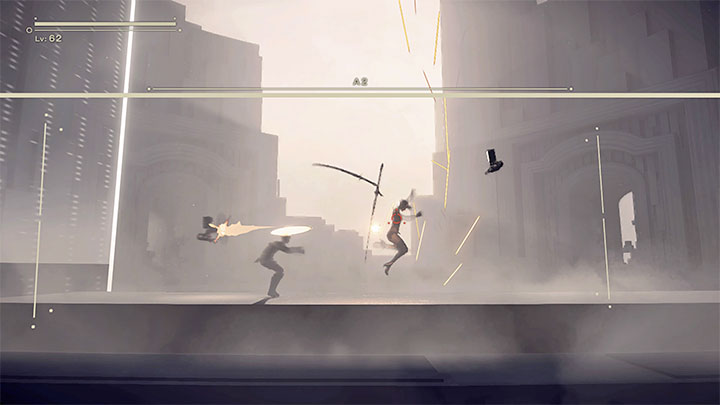 Taking the side of 9S means that A2 will become the final boss of the game. An additional hindrance is you will play the final fight with a side camera.

You can attack A2 in hand-to-hand combat or at a distance (be sure to lock the camera and use offensive pod programs). 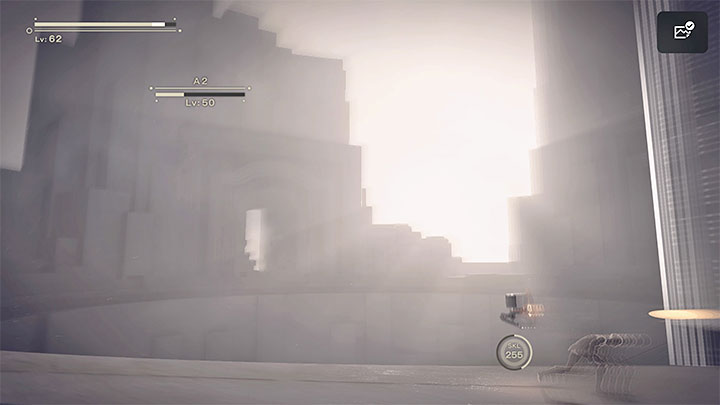 A2 performs quick attacks after disappearing from the screen. It can be: 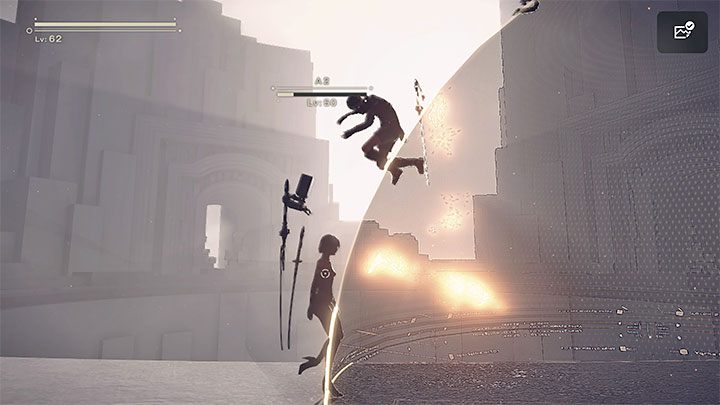 A2 can create a dome able to slow down and limit the movements. Try to move away from the place where it will appear (the attack is indicated). If it's too late for that, focus on getting out of the dome as quickly as possible. 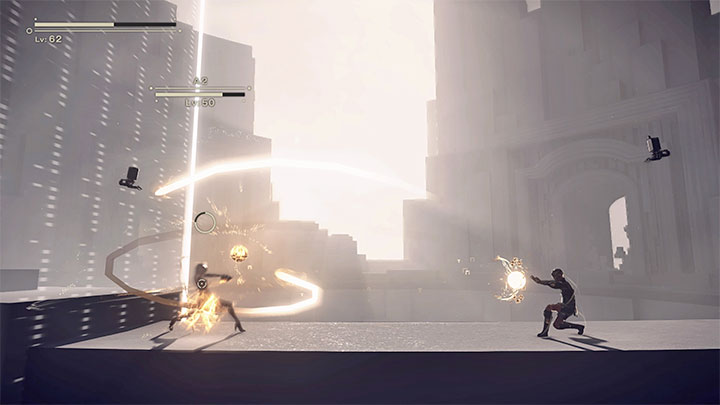 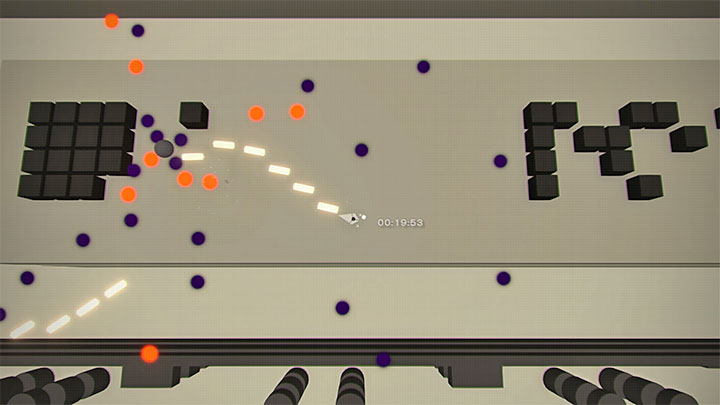 Playing as 9S you can try to hack A2. To start hacking, move far enough from the opponent so that she did not have time to get close and interrupt you. The mini-game is slightly harder than usual, but its rules remain the same. Any successful hacking will take some of A2's health. 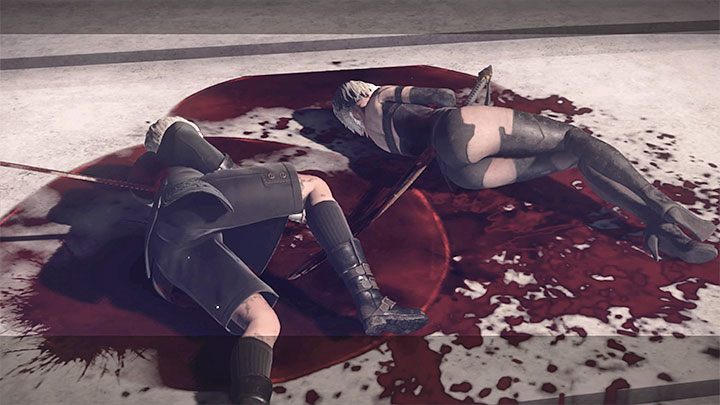 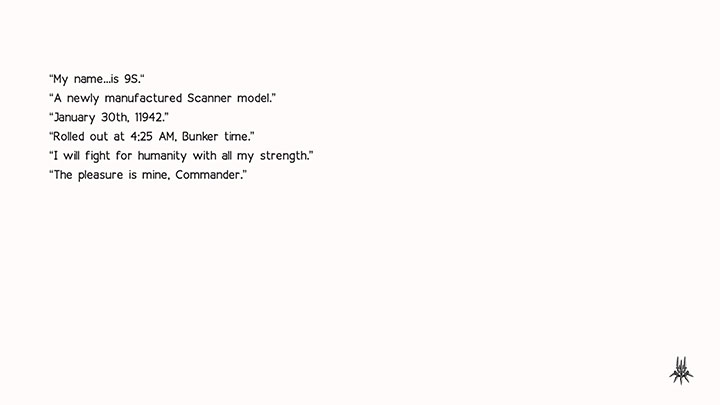 After defeating A2, the game will play ending D, part of which is written in the text - you can read it or scroll it by holding the circle. There are also small choices. By unlocking ending D, you will receive a trophy Leaving for the New World.

Note - If you have already watched endings C and D, go to the next section of the guide. There will be an opportunity to see ending E when the game displays end credits.

Ending E - how to unlock? 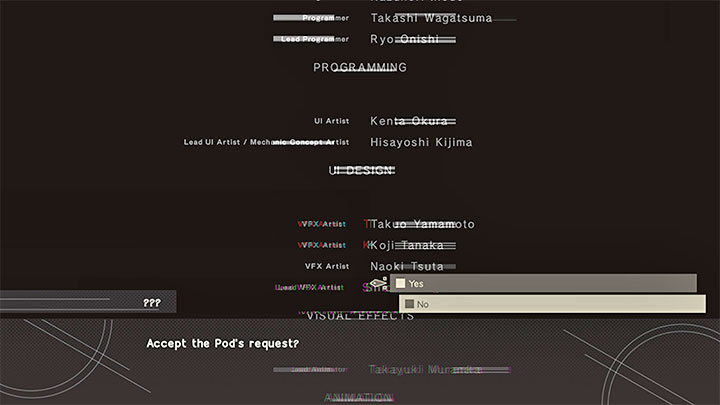 Ending E is the definitive ending of the game. To unlock it, you need to see C and D endings first. You can do this in any order, i.e.:

Whichever order you chose, don't turn off the game after viewing the second of the available endings. Shortly after the end credits appear, you will be asked whether to "Accept the Pod's request" - select Yes. After the "conversation" between pods, there will be another choice: "Knowing that, do you still wish for them to survive?". Select Yes again. 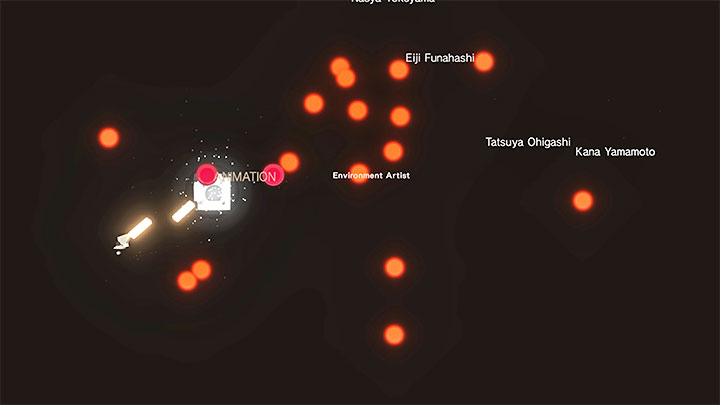 There will be fights during the end credits similar to the hacking mini-game - you have to destroy enemies by controlling the arrow and avoid taking damage at the same time.

First of all, aim for larger words(e.g. the names of the departments responsible for the production of the game) because they can shoot red bullets impossible to destroy. 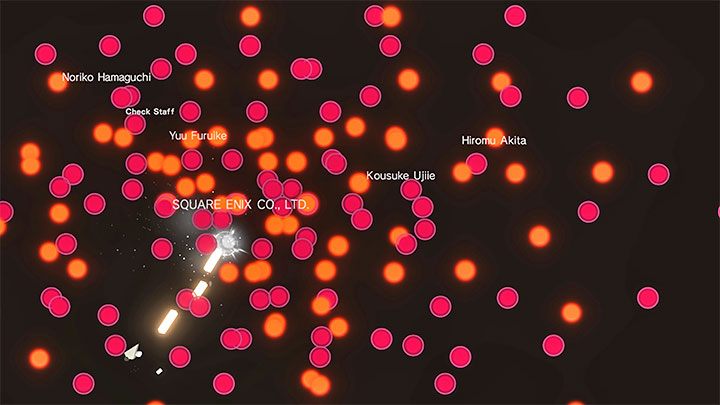 It is almost certain that at some point you will lose- if this does not happen in the initial phase of the mini-game, you almost certainly will after a large inscription Square-Enix appears, which will start a rapid fire. 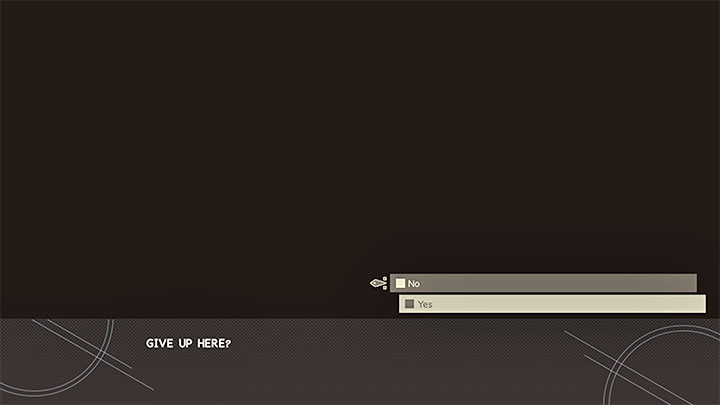 Every time you die, the game will ask if you want to give up - you always have to choose the answer "No" - that is, refuse and restart the last fights (the form of the question may vary, but the available answer options will always be the same). 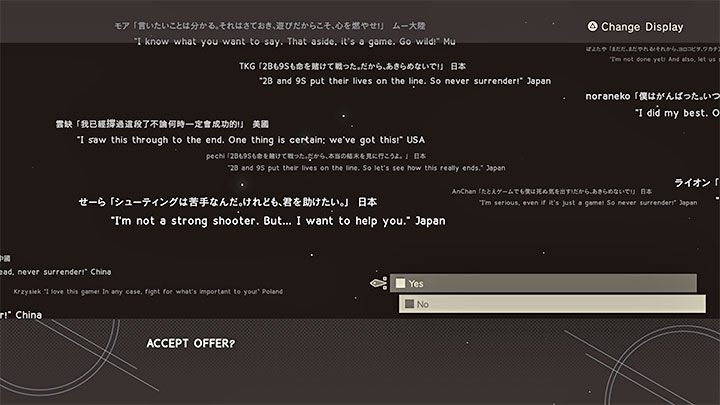 In the later stage of the credits, even after a restart, you can almost immediately get under heavy fire, and the situation may seem lost. Continue refusing to surrender until the game offers you to ask for help from other players - "Accept Offer". Note that this option is only available if you play online and have Network Features enabled - we described this in more detail on the Social elements page. 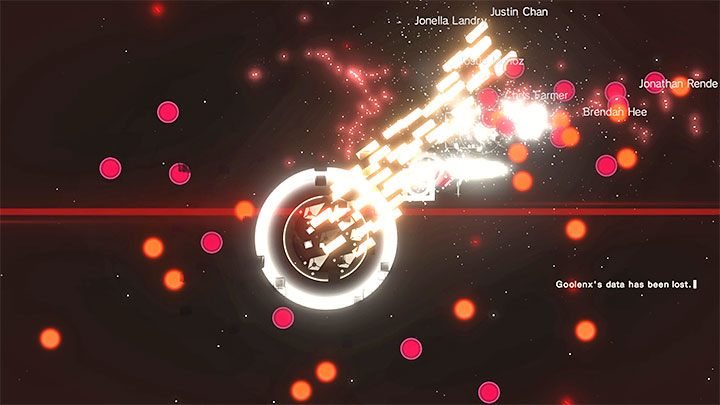 From that moment, ships of other players will be summoned. This will increase your firepower, and you will not lose after 3 hits. Continue fighting until all end credits are displayed. 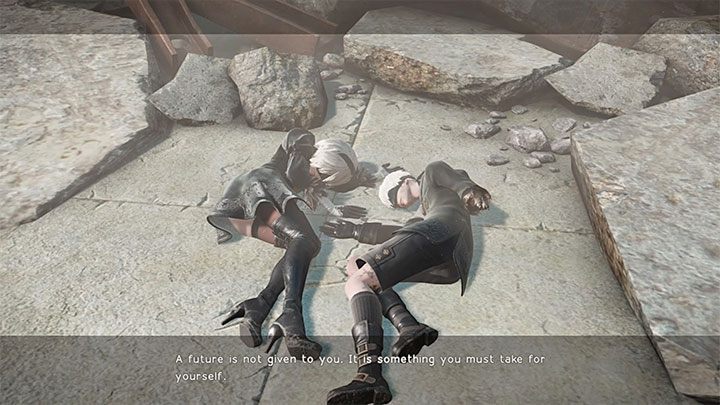 You can watch Ending E and get a gold trophy: The Minds That Emerged. 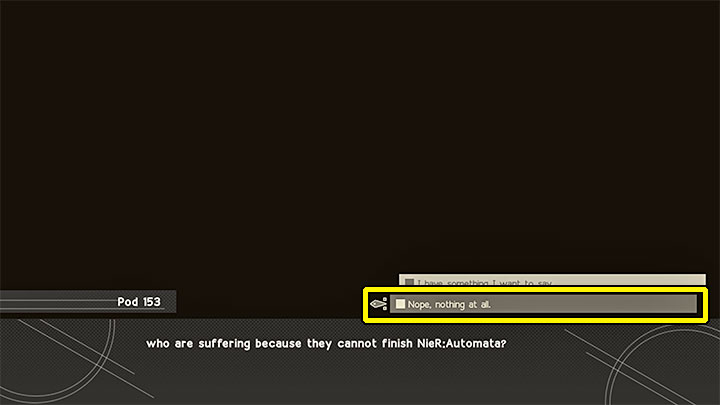 Important note - you will have to answer a question that can lead to deleting all the saves you have on the hard drive of your console or computer. That would prevent you from continuing the game in Chapter Select, and you would lose all progress.

The game will ask you if you would like to help the weaker players who have difficulty completing Nier Automata. You have to select the dialog option: Nope, nothing at all. This will allow you to keep progress, save the game after unlocking ending E and continue the gameplay thanks to the Chapter Select option.