This page of the guide to Nier Automata describes the walkthrogh of Chapter 16 in which you get to control 9s and A2 in turns. The following walkthorugh explains how to gain access to the God Box tower, how to climb to the top of the Recovery Unit structure in the amusement park, how to defeat the Operator 21O and Auguste bosses, and also how to get the Park Access Key.

Obtain Keys - in the amusement park 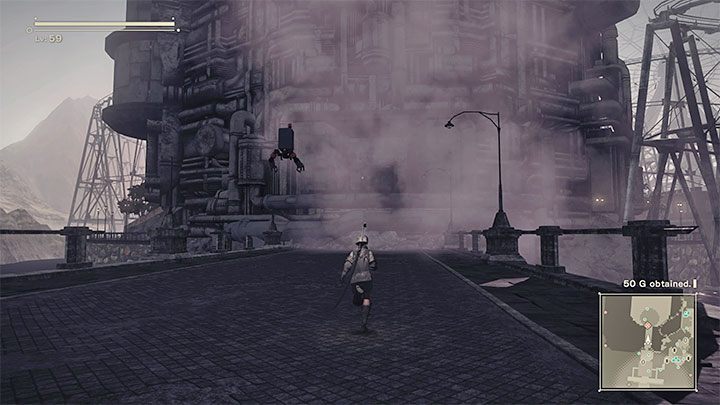 You will start this chapter after you have completed chapters 13 (9s) and 14 (A2). Initially, you will take control of 9S. You will have to explore the thirs and last Recovery Unit object. After the start of the struggle in Resistance Camp you must go to Amusement Park. You can, of course, shorten your trip by using fast travel. 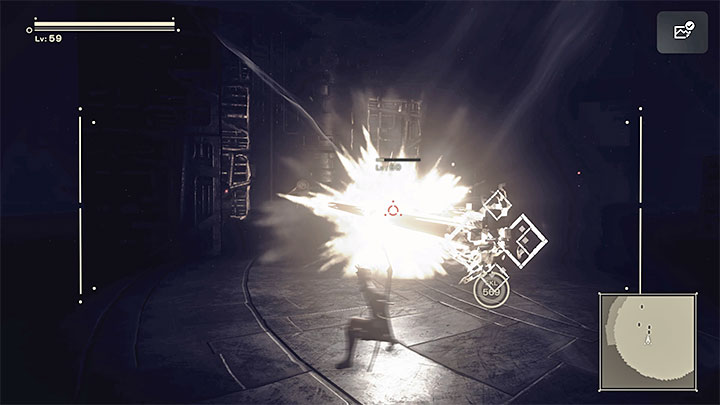 After regaining control of 9S, explore the tower. In the first room, it will suddenly become dark and you will be attacked by machines. You can use POD's flashlight, but it is easier to block the camera on enemies in order to more effectively attack them (especially with ranged attacks).

In this skirmish and all subsequent ones, hacking is also available, although it is not worth wasting time on getting rid of easy enemies in this way. After the fight, go to the elevator. 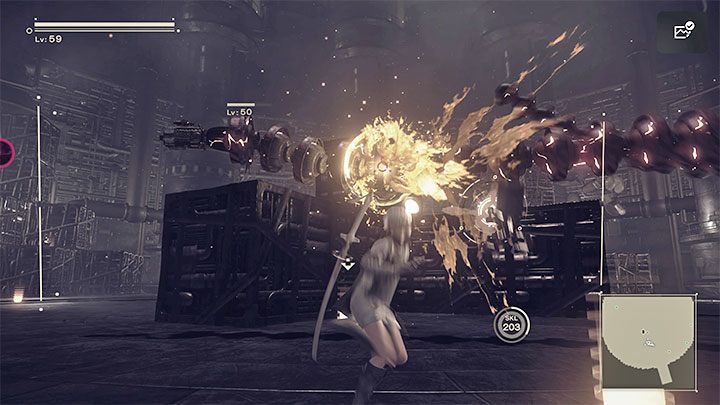 On the new floor, another fight will begin. In the case of flying enemies, remember to set the camera on their yellow cores in order to effectively attack them. You can attack regular machines standing on the crates from a distance or leap towards them and deal with them personally.

The next floor will mean more fights and again you can (freely) choose between ranged and melee combat. Concentrate your attacks on larger opponents to stop them from releasing a large number of missiles. 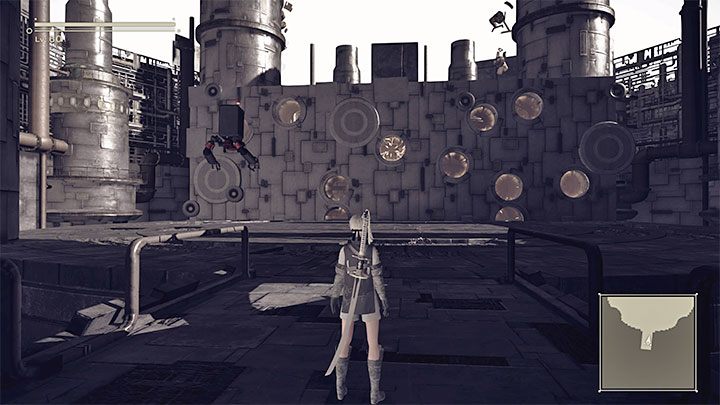 Run along the empty floor. After the last time you use the elevator, you will reach Operator 21O. You will find that it is infected with a virus and it will be necessary to fight the boss.

Boss Operator 21O - the first phase of the duel 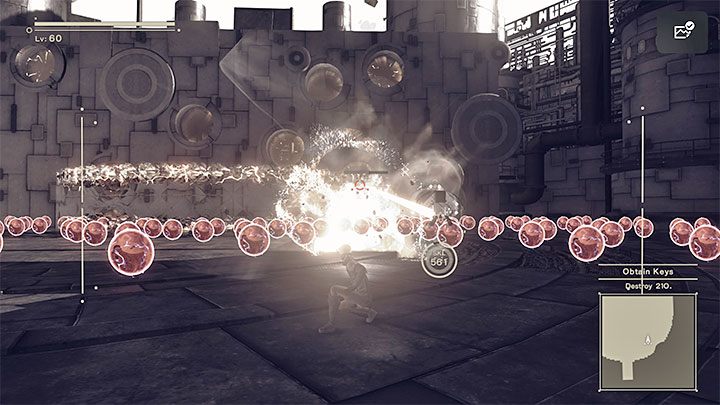 The boss will surround himself with moving rings and shoot a lot of missiles. Fortunately, you can destroy the missiles, although they can distract you from your main tasks.

If the difficulty level allows you to do so, then lock the camera on the yellow ring cores and then immediately shoot at them. Use the Laser program and others to increase accuracy. What's interesting you can also try to hack the cores. Still, this can be troublesome if there are too many missiles coming your way. Both methods can be effective in weakening the boss's protection. 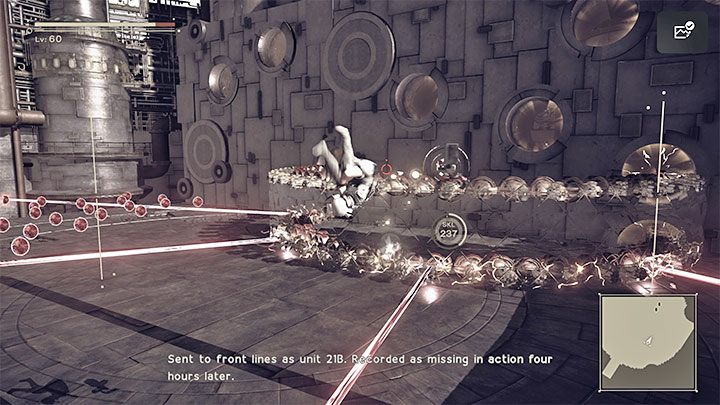 The rings will shoot red lasers. In order to avoid getting hurt, you have to jump over them at the right moment. Try not to stop shooting the yellow cores on the rings.

Boss Operator 21O - the second phase of the duel 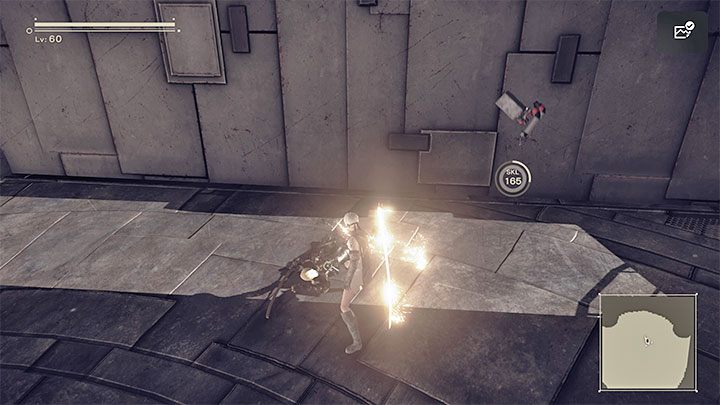 You will proceed to the second phase of the duel after the destruction of the rings. In this part of the battle you can directly attack Operator 21O. - both ranged and melee attacks can be used to weaken the boss. Ranged attacks are safer because the boss will aim for direct attacks with melee weapons. 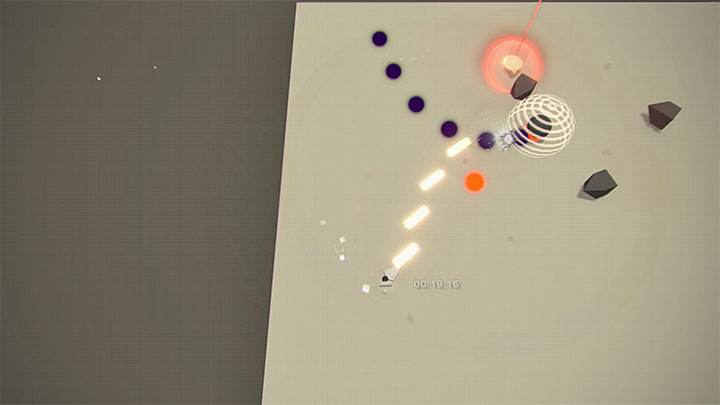 Boss hacking is also allowed, although expect, of course, the need to play more difficult variants of the hacking mini-game.

Keep attacking and hacking in order to successively deprive the Operator 21O of additional energy points and, ultimately, defeat the boss. The action moves to A2 and you have to duel with the second boss - Auguste. 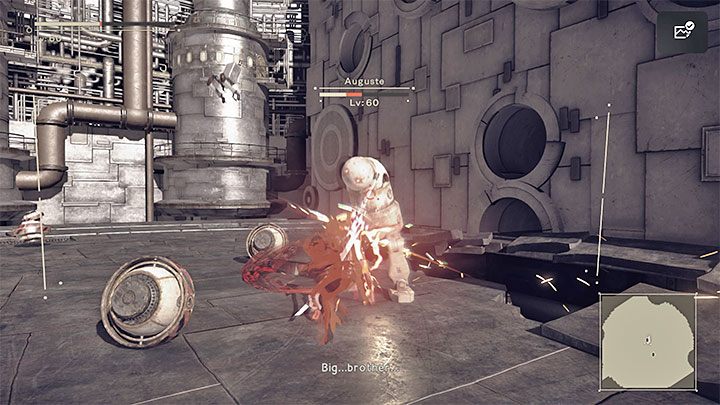 You will engage this fight as A2. The Boss uses balls which have several uses.

Auguste uses the balls primarily as upper limbs - the boss can rotate around its own axis, try to crush A2 with balls or deploy the limbs to hit A2. You have two options: 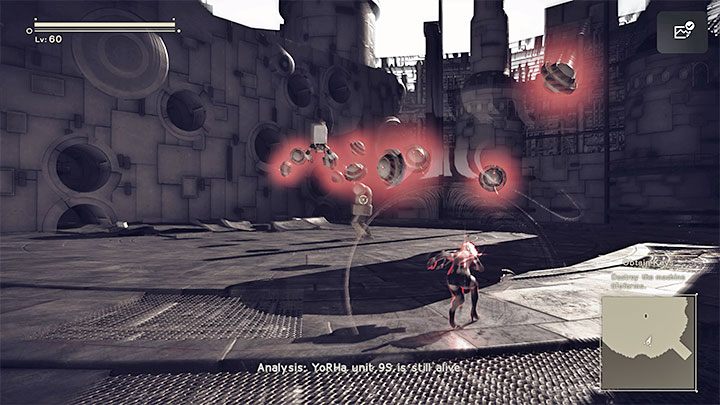 The balls can detach from Auguste's body and pose a threat to A2. Depending on the type of boss attack, they can levitate or bounce off the arena. You can then move away from the boss as much as possible or try to run between the balls and look for opportunities for effective attacks with melee weapons. 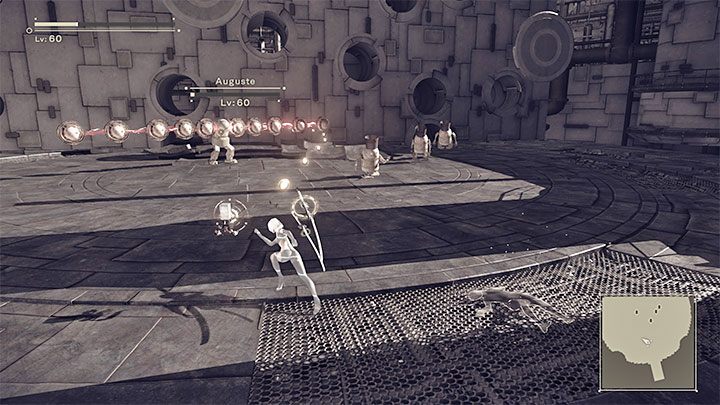 Small machines can join the fight and it is best to rely on area attacks in order to simultaneously try to destroy them and weaken the boss.

Fight until the boss loses all health and a cutscene is activated. 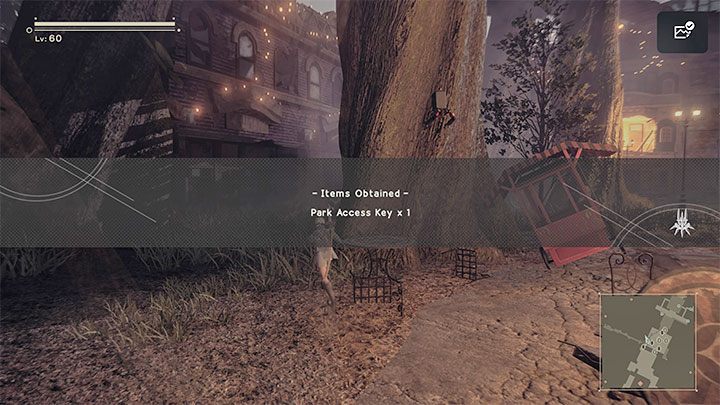 Soon you will regain control of 9S and you will find yourself in the central part of the Amusement Park. Listen to POD's comment and wait until you get the third and lastPark Access Key.

You can now proceed to the final chapter 17.