On this page of the guide to NieR Automata, you will find the walkthrough for the side quests available in the Bunker. You will find out when the side missions from the Bunker become available, what they are about, and possible important choices, as well as what rewards you can get for completing the quests associated with the Bunker. 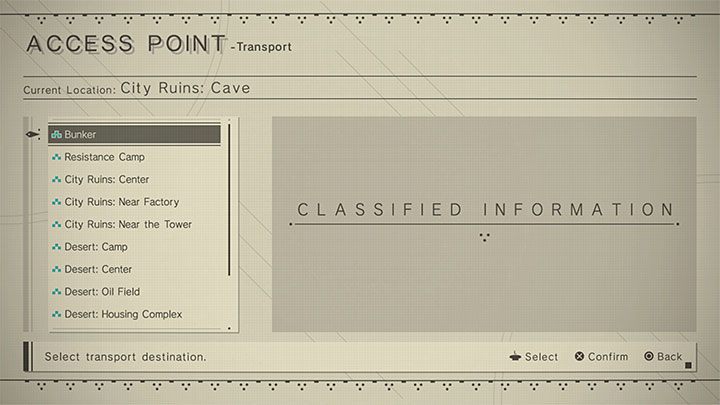 You will visit the Bunker for the first time after completing the prologue. You can return to this place later in the game. Because of its location, the only way to reach it is via fast travel - you must reach any Access Point on the main map and select Transport. 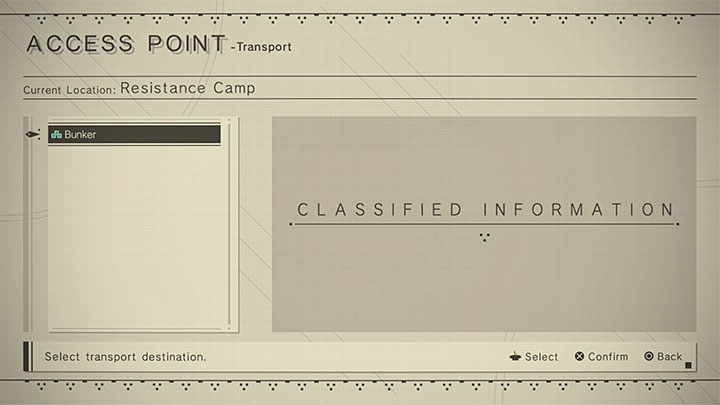 This mission is easy to miss because it starts in the Bunker - the main story doesn't require you to go back there. You can start the quest in chapters 2, 3, or 4 of Route A. Visit the Resistance Camp, interact with the Access Point, select Transport, and move to the Bunker. 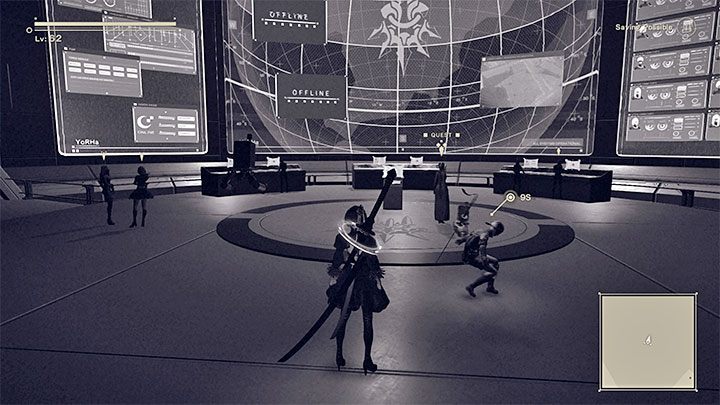 When you get there, go to the command center and talk to Commander. 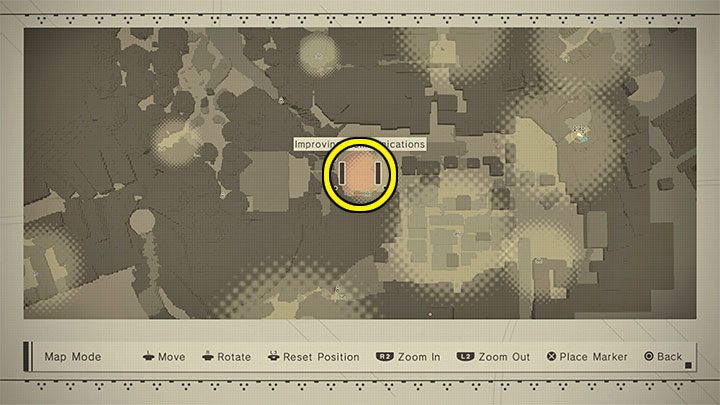 Quest description: Return to the surface and await word from command. Your goal is to obtain several common crafting materials - Rusty Bolt x1, Small Gear x1 and Broken Key x1. It is possible that you already have them - obtained either as rewards from quests or found during exploration. Otherwise, visit the quest area in the City Ruins.

After obtaining the items, go to Anemone at Resistance Camp to end the mission. 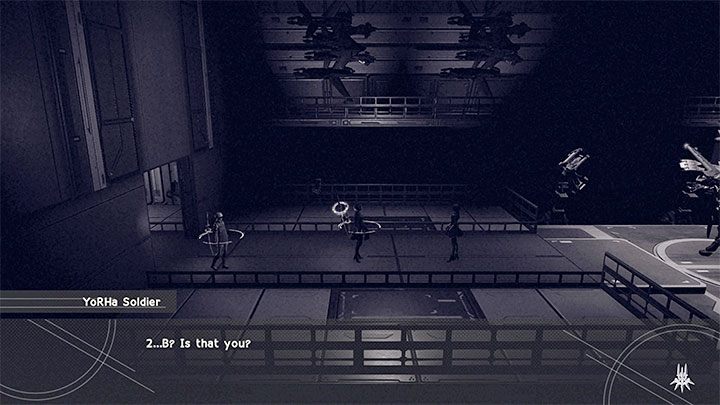 This mission is easy to miss because it starts in the Bunker - the main story doesn't require you to go back there. You can do this quest only in Route A. Try to start it in chapter 2, 3 or 4. Visit the Resistance Camp, interact with the Access Point, select Transport, and move to the Bunker.

In the bunker, get to the hangar. This should trigger a conversation with a YoRHa soldier, 16D. Agree to help find 11B. 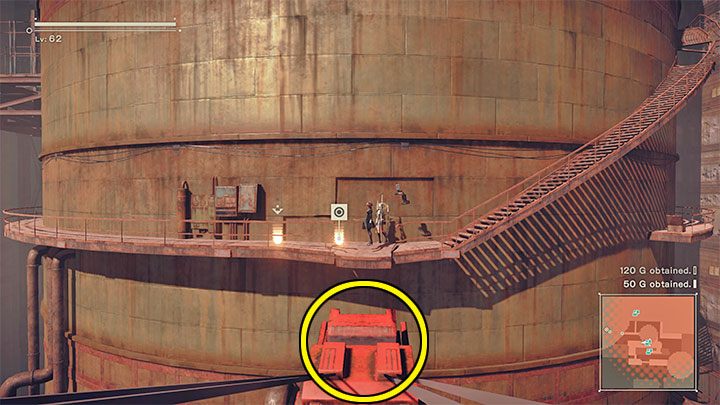 To search for 11B, you must go to the Abandoned Factory - you have to go deep into that location. The goal is to reach the metal balconies around the large silos. In the place from the picture, you will be able to go down the screen and jump on the red crane. 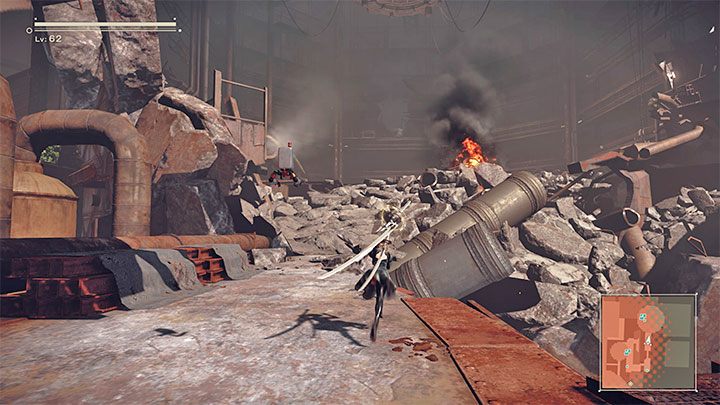 Explore the area and get to the destroyed walls of one of the buildings. 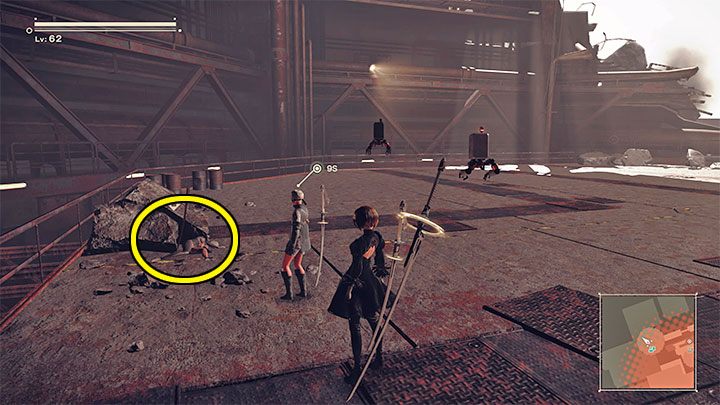 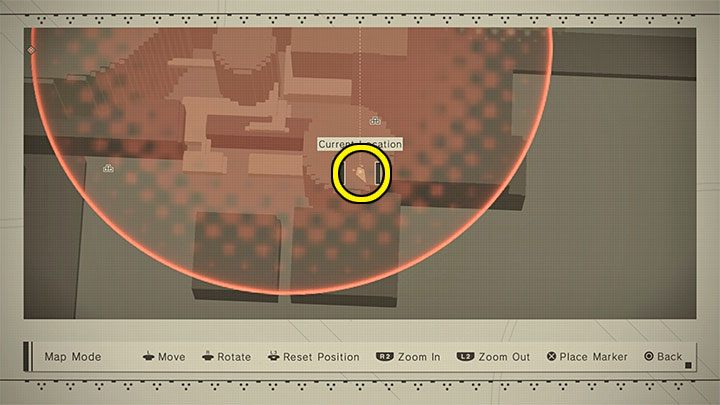 11B's corpse can be found in the place from the above images. Interact with them to unlock 11B's Escape Plan and obtain 11B's Belongings. 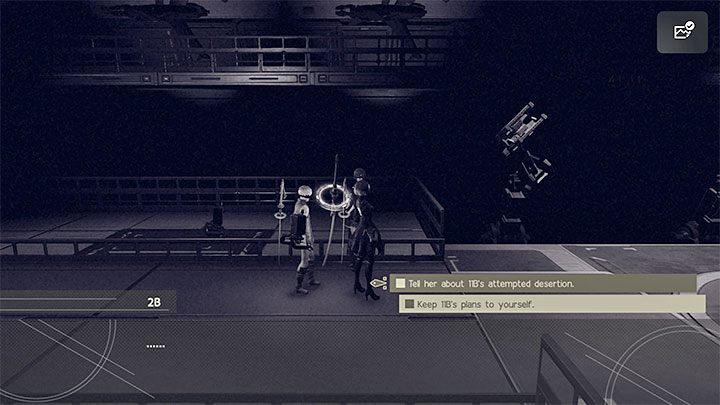 You can leave the factory, go back to the Resistance Camp and use the transport option to get back to the Bunker. Talk to 16D. You can reveal the truth that android 11B was planning desertion, or you can lie - this will not affect the quest's finale or the rewards. 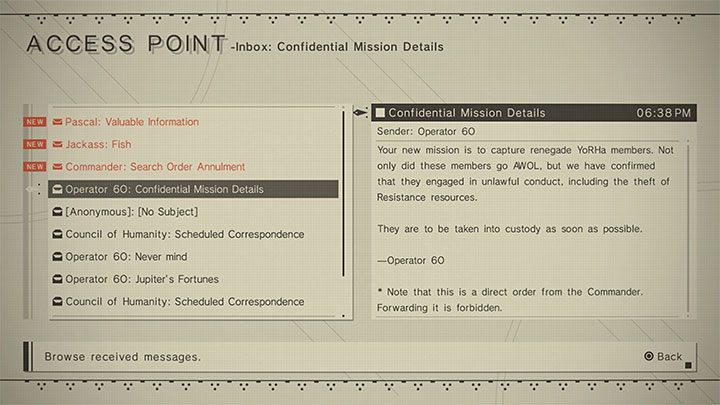 In chapter 6, you should receive an email Operator 6O: Confidential Mission Details. Reading it will add a new quest. It's about finding the YoRHa deserters. 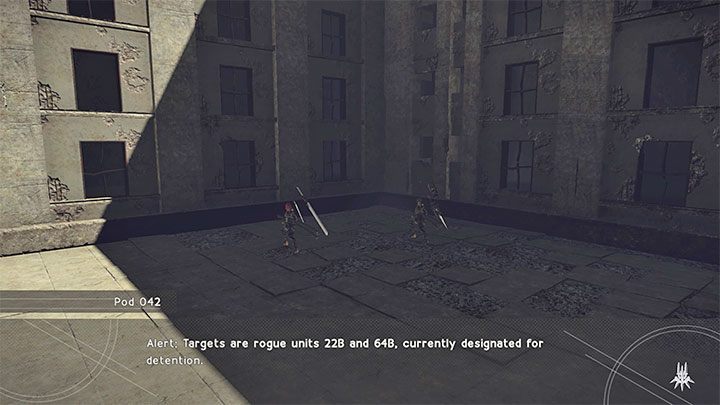 Quest description: Move to the City Ruins. There are 3 red circles on the map - they mark where the wanted androids can be found. In our case, the androids were in the largest circle - the roof of the building that can be accessed by following the stairs and jumping through holes in the ceilings. If there are no androids there, go to the area next to the Abandoned Factory - check out the area under the damaged bridge.

You will face androids 22B and 64B. It is worth noting that they are much more agile and better at close-quarters combat than the machines. Use perfect dodges, or use Pod's ranged attacks. The weakened androids will escape. 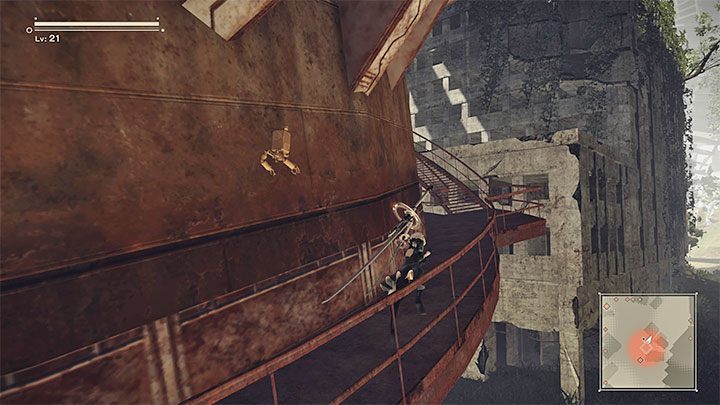 You will find them again in the red circle marking the defeated Goliath. You have to climb to the very top of the inactive Goliath - use metal balconies and the ladders. 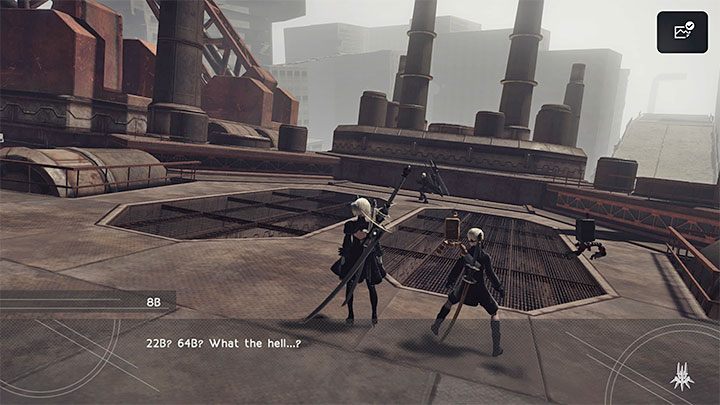 On the Goliath's highest platform, you will encounter 22B and 64B. Defeat them once more. Keep fighting until a stronger android, 8B, will appear. The former android-captain will be a little more difficult - this opponent has more health and higher resistance. However, the general tactics do not change - dodge a lot and use ranged attacks.

After winning the fight, get to the Resistance Camp and talk about deserters with Anemone. The quest ends when you receive a call from the command. 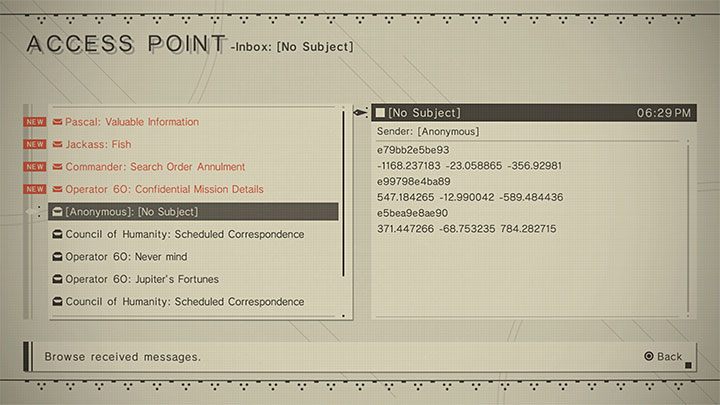 You must install the 3C3C1D119440927 DLC. You need to buy it separately if you have the basic version of NieR Automata. The DLC comes with the Game of the YoRHa Edition. Even if you bought the GotY edition, you will probably need to install this DLC separately. We described this in more detail on the page Game of the Yorha Edition in the appendix to our guide.

If you have installed the DLC, you will receive the following email from an anonymous sender in chapter 6. It will contain 3 sets of coordinates and the described quest will appear in your journal. By visiting locations from the coordinates, you will discover 3 more quests: 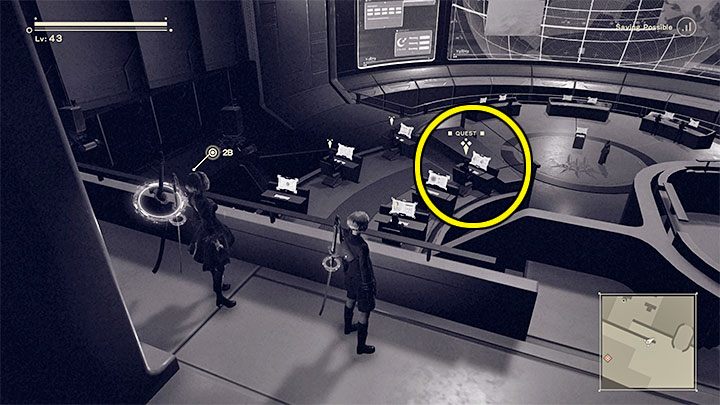 Quest giver: Operator 21O (Bunker). The quest is only available in Route B.

You'll need to advance to chapter 6 in Route B. When you go back to the Bunker to report on your last mission, reach the upper balcony of the command center. In the place marked in the picture, you will find one of the operators - this is the quest giver. 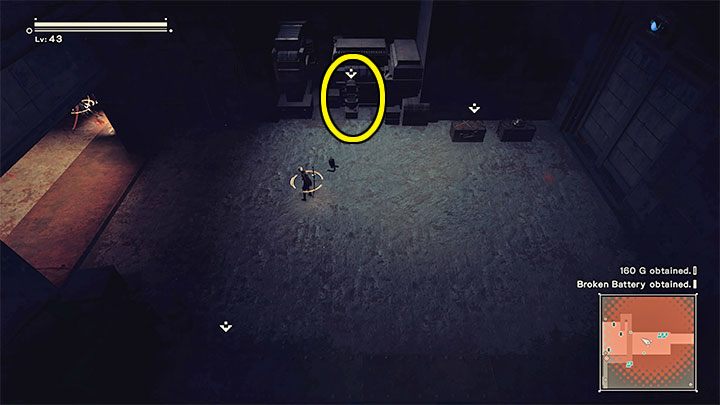 Quest description: Examine the terminal in the Abandoned Factory. Use fast travel to get near the entrance to the Factory and start exploring it. The area you have to examine was marked on the above image - it is one of the larger rooms where the camera switches to top-down perspective.

To transmit the collected data, you need to go to the surface - leave the factory building and wait for 9S to contact the Operator. Visit any Access Point to receive an email with rewards for completing the task. 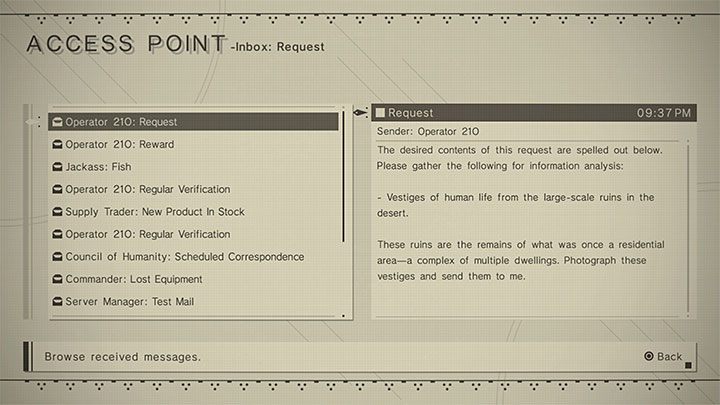 Quest giver: Operator 21O. The quest is only available in Route B.

You must first complete the Data Analysis Freak quest described above. Its second part will begin soon after completing the first one. When you travel around the game world with 9S, you will be contacted again by Operator 21O. Visit any Access Point and read the email Operator 21O: Request to find out the details. 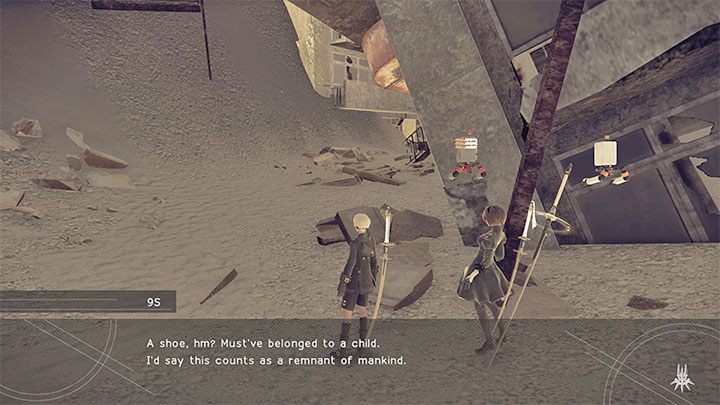 Visit the Housing Complex in the Desert - an abandoned district. You need to find 3 items. They will be among the loot lying on the ground. These are: 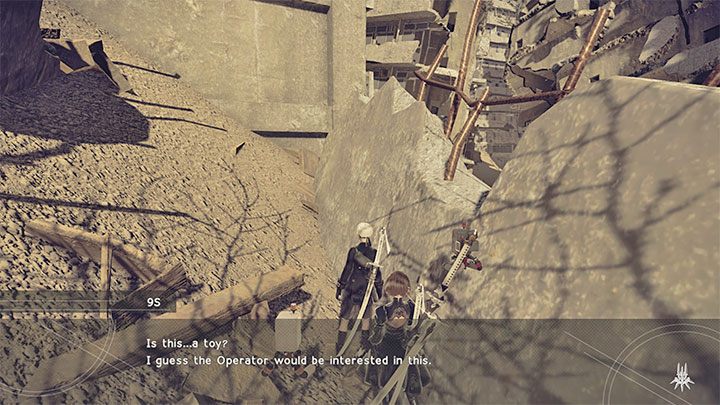 2) Broken Toy - This item is on uneven ground, next to a damaged building wall 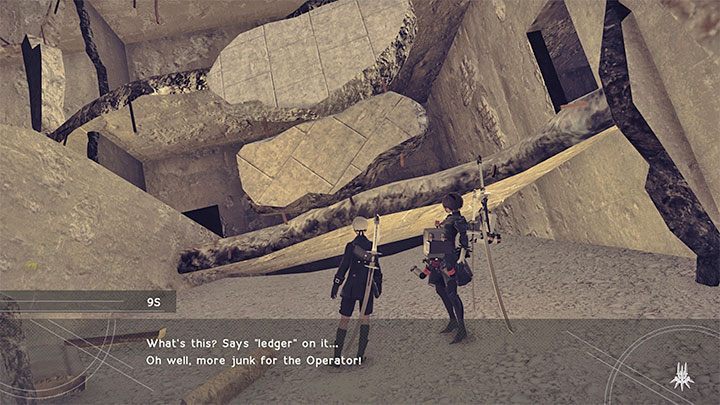 To complete this mission, listen to the conversation with the Operator and reach any Access Point.