This page of the guide to Nier Automata describes the walkthrough of Chapter 14 in which you control A2. The following walkthrough explains how to get a new fuel filter, what are the important choices about Pascal, how to win the favor of the inhabitants of the machine village, how to protect the machines in the factory and how to defeat the boss Engels in the clash of Goliaths, among others. 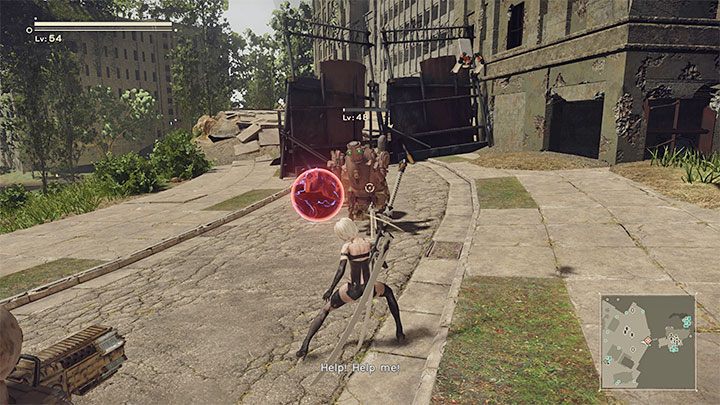 The chapter begins in the desert, which is the place where, in Chapter 12, A2 fought with the boss Hegel. You will learn about the need to replace the fuel filter, and your new task will be to find a person who can help in this.

Pod suggests you visit Resistance Camp and you can get there via fast travel. We recommend saving the game status. Get to the marker at the entrance to the camp and help Pascal in getting rid of the enemies. 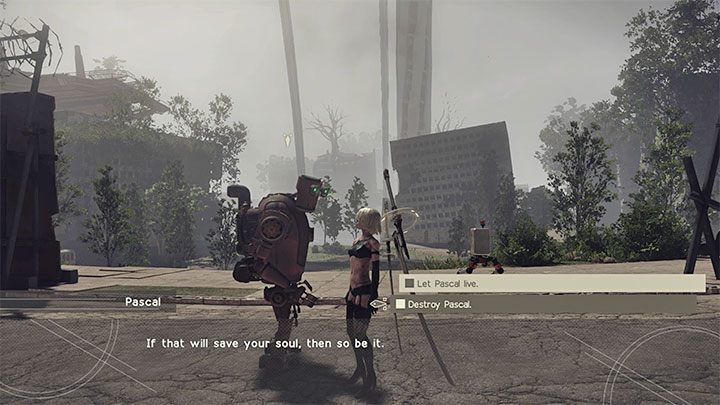 After the fight, talk to Pascal. The game will offer you a choice: 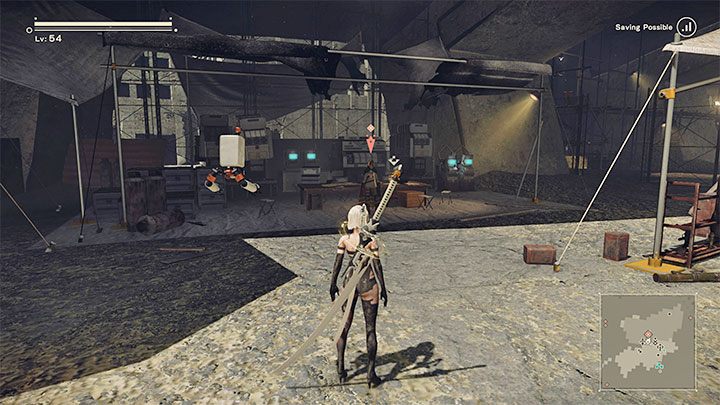 Go into the rebel hideout and talk to Anemone twice. By the way, you will unlock access to the vendors from this location (during the first visit to the camp they were distrustful of A2 and did not offer their goods or services). 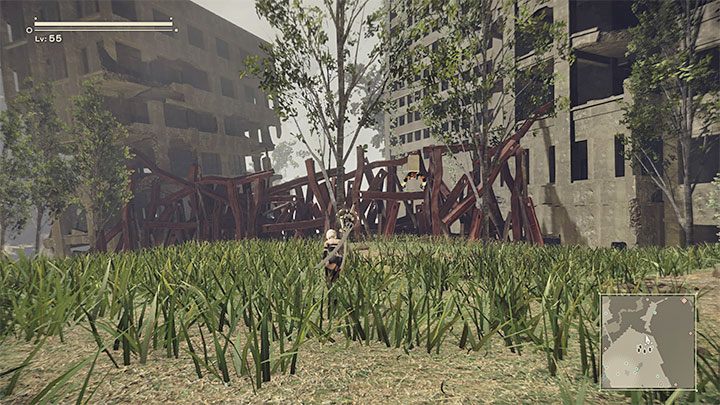 You can take the opportunity to start new side quests in the Resistance Camp or immediately go to Pascal's Village. The game will not allow you to fast travel, so reach the barricade on the outskirts of the ruins of the city (screenshot above). You will learn from Pascal what ingredient is needed to produce the filter. 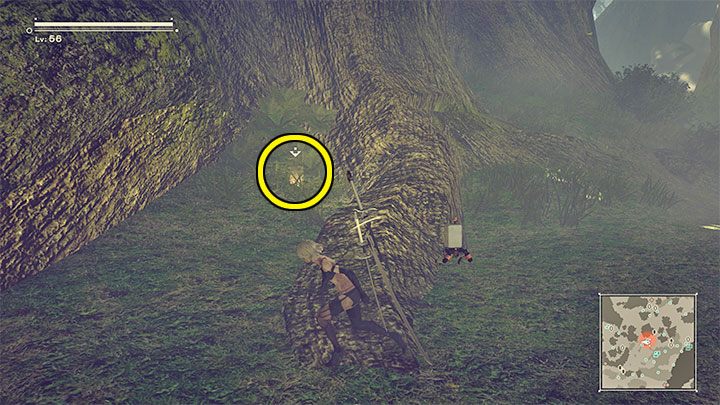 The area indicated by Pascal is located in Forest Zone and in this case, you can use fact travel. When exploring the forest, beware of the local machines that will try to surprise you by jumping out of the bushes, among others. Fortunately, they do not pose much of a threat and you do not have to fight them at all, as you can continue onward.

When you reach the red circle, look behind the glowing loot at the base of the big tree. You have to get Rigid Tree Bark and to Pascal with it. You will receive fuel filter. 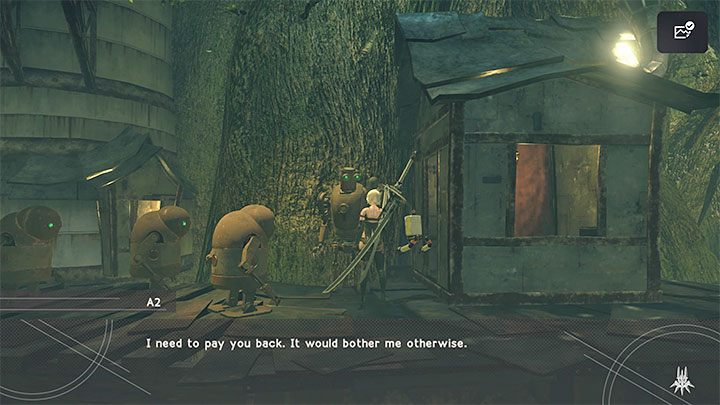 As a thank you for creating the fuel filter, A2 will offer to help get rid of the machine abusing the children in the village. You will receive a small quest Vanquish the Bad Bot. We described it on the page Machine Village in Chapter Side missions. 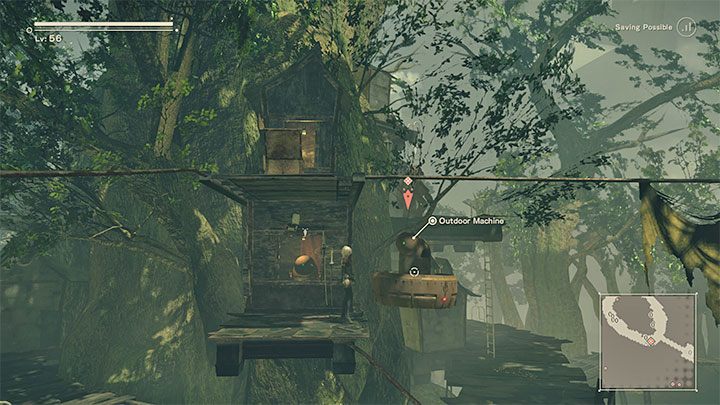 You can also continue helping the machines with side quests Storage Element i Play With Us!.

You have to meet the Outdoor Machine in the village and agree to bring the book from Anemone. Go to Resistance Camp and talk to Anemone to receive Book: Pensees and Gold Ore. There's a very short cutscene involving Pascal. 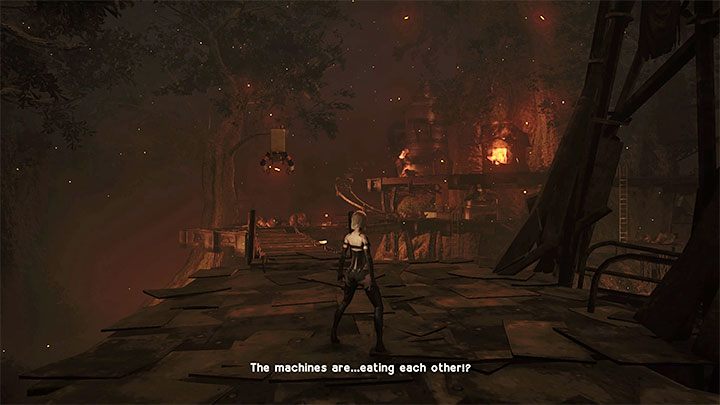 After you resume control of A2, you will receive a radio message from which you will learn that the machine village is in danger. Take this opportunity to save game status. There are two ways to proceed:

When you get there, you'll find that the machines are attacking each other, and you can talk to Pascal. 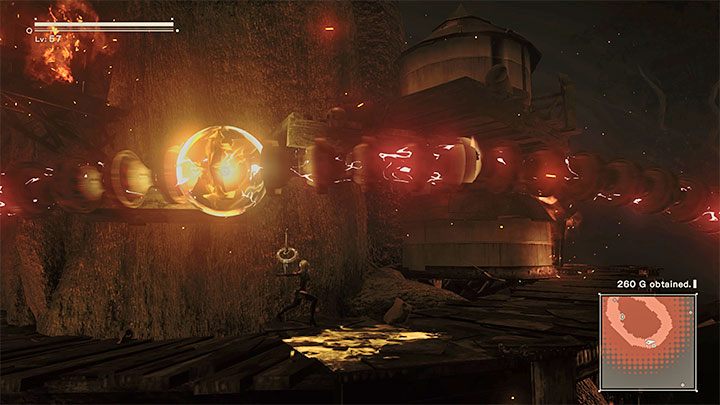 Pascal will give you permission to attack these machines, which have turned against the peaceful inhabitants of the village. Those of the machines that fight on the ground can be attacked in any way, but there are also mechanical worms flying around the village. As a reminder, the best solution is to lock the camera and the sight on the yellow core of the flying enemy (as shown in the screenshot) in order to be able to attack it effectively (optimally using a laser or other pod's powerful offensive program).

Some machines are located on the lower level, so check all levels of the village using ladders. After the fight, listen to Pascal's message to learn about the retreat of the surviving machines to the abandoned factory. 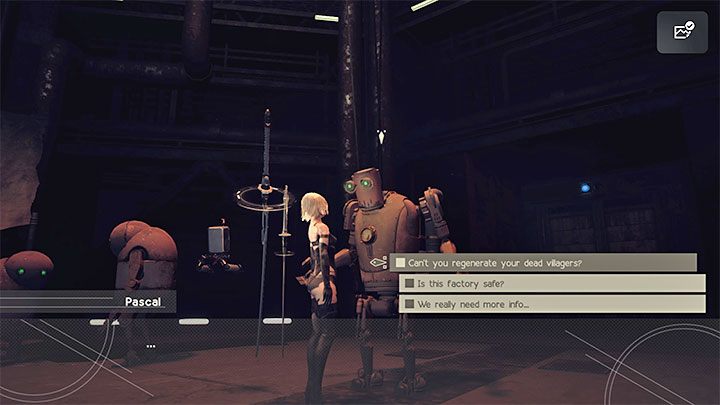 Use fast travel to go to Abandoned Factory. Save game status and then make your way to the entrance to meet Pascal.

After entering the factory building, you will have the opportunity to unlock the R ending- you must attack one of the surviving, defenseless machines. When the game resumes, talk to Pascal - it is worth clicking through all the dialogue options. 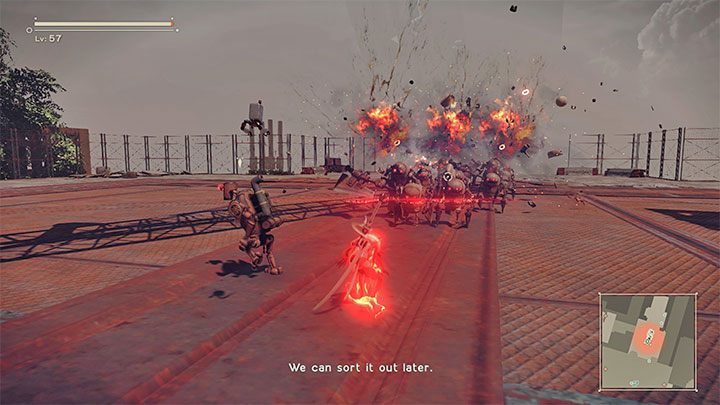 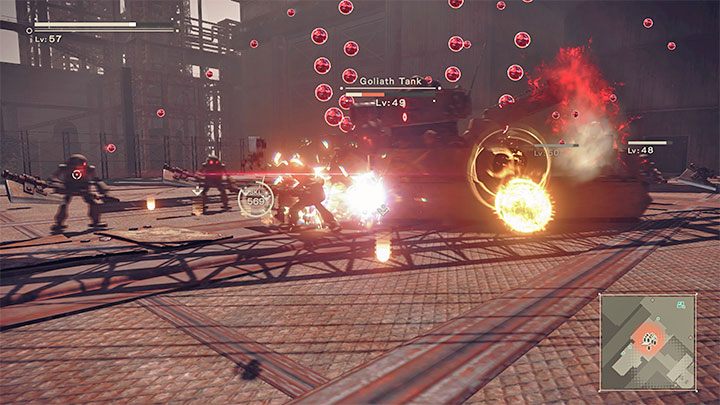 After a while, the Goliath Tank will join the battle. As in the case of other tank confrontations from earlier chapters, you should first aim to destroy the guns mounted on the tank in order to stop it from firing at you. Again, you can also use berserk mode.

After the fighting, the cutscene of the arrival of the great goliaths will be activated, and you will take control of one of them. 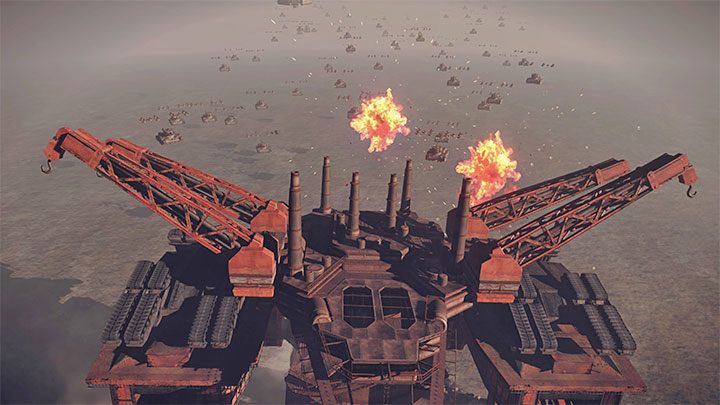 You will proceed to control the great Goliath playing as Pascal and you can look for opportunities during the march to destroy the emerging enemy flying machines- r anged attacks and upper-limb swings are available to use. 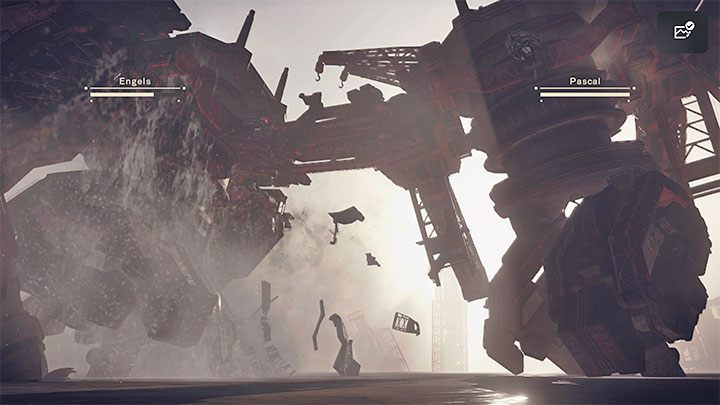 Soon you will see a custcene, during which theenemy Goliath Engels appears. First of all, try to attack in order to hit the boss and prevent him from using the same attack from the start of the boss fight. 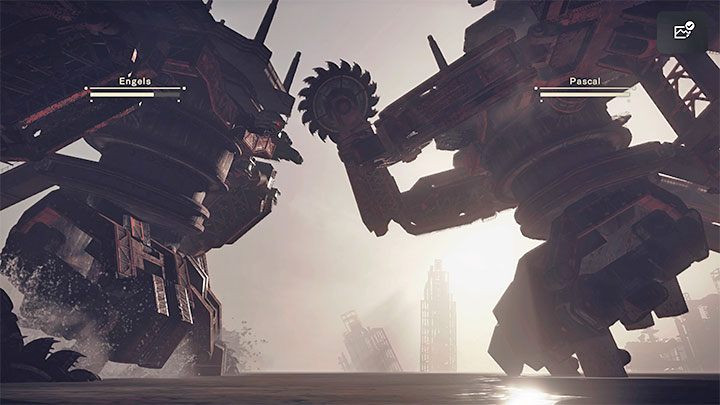 You can also block enemy blows when you see that Engels managed to make the attack.

Continue to weaken Engels, who will lose fragments of the great armor and will eventually be defeated. 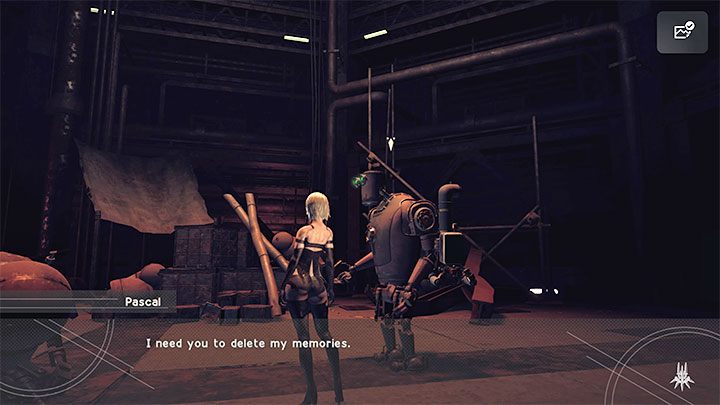 Talk to Pascal while playing again as A2. Pascal will ask you to erase his memories. You'll face an important choice. 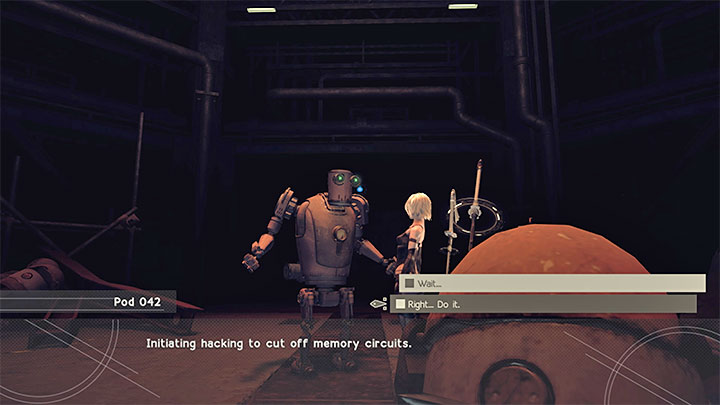 Selecting the next chapter

If you have not yet passed the new stages when playing as 9S, then the game will again display the selection window and definitely choose the option Monitor 9S he'll let you join them. Otherwise, you will immediately continue to the next part of the campaign.