This page of the guide to NieR Automata contains the walkthrough of Chapter 12 in which you control A2 for the first time. The following walkthrough explains e.g. how to use A2's unique skills, how to get rid of the Goliaths in the Desert Zone, how to defeat the Hegel boss, and how to complete the sequence in A2's memory bank. 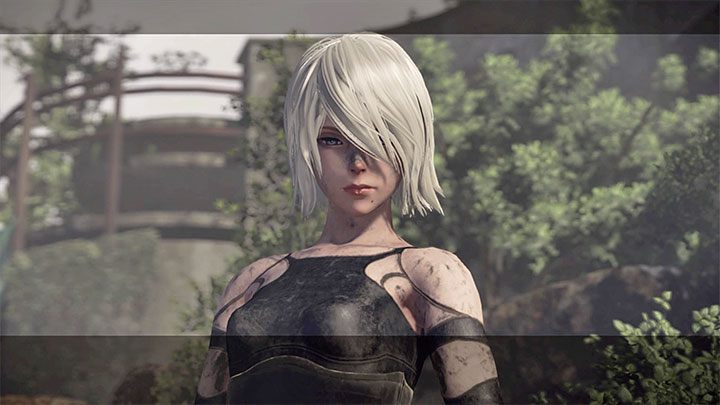 Destroy Machines - attacking the machines in the Desert Zone 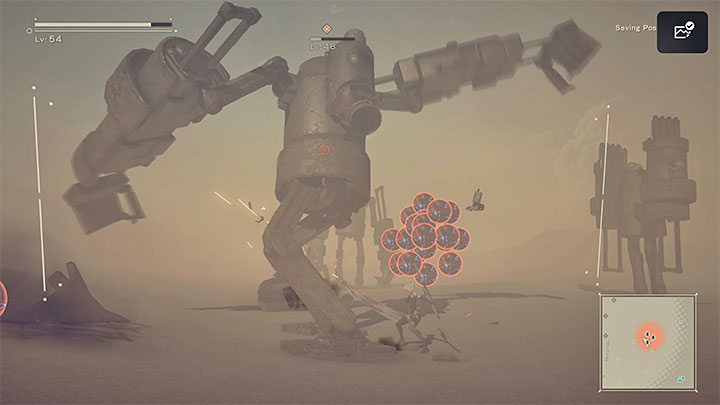 After A2 wakes up, listen to the conversation with the Pod. You will receive the first mission objective shortly after gaining control over A2. The machines are located in the Desert Zone, specifically in its largest part - choose the Desert: center Access Point as your fast travel destination.

You have to eliminate several Goliaths. By default, try to attack these machines one at a time, but also jump away from your current opponent if you see an incoming group of missiles. After you deal with the Goliaths, the boss will appear. 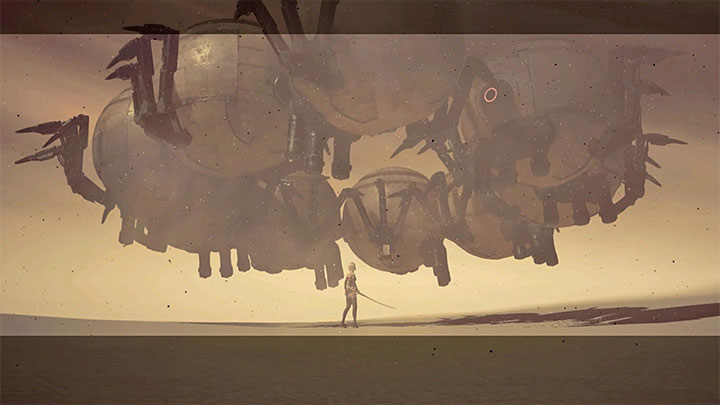 The boss fight can be quite problematic and annoying, because his attacks can happen quickly one after another, and prevent you from performing attacks of your own. If you get hit by a stream of energy, then always try to get away from it first, so that you don't get hit by more attacks. 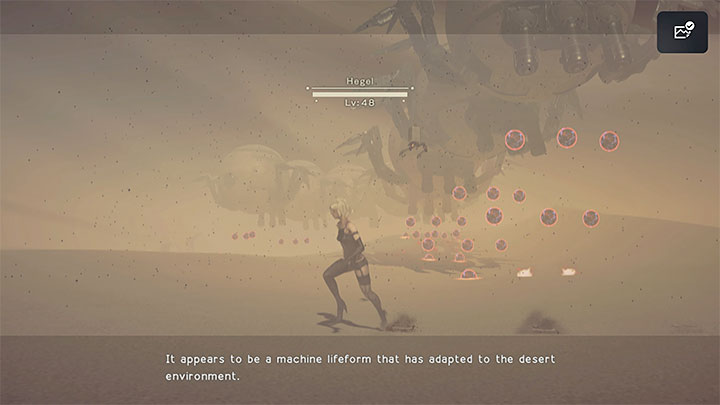 The boss initially flies over the desert and bombs the area with regular missiles. It is best to lock the camera on Hegel and use your own long-distance attacks, including the offensive Pod programs. 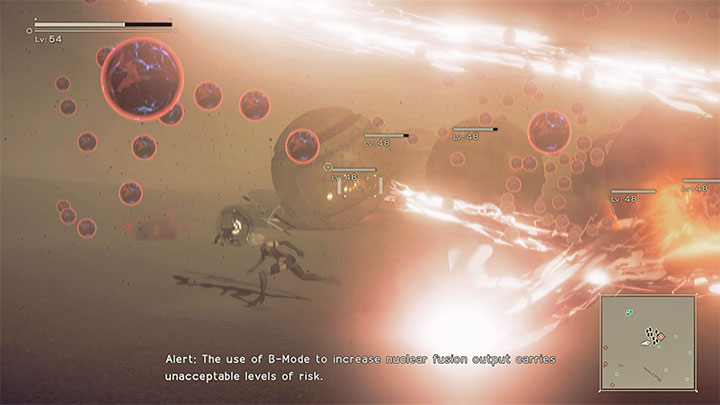 Every now and then, Hegel disintegrates into single spheres that land in different places on the sand. The spheres can shoot large beams of energy which can not only inflict heavy damage, but also knock A2 off balance and expose her to further attacks. Try to jump to the sides a lot in order to avoid the beams from the currently attacked sphere and others located in the area. Unfortunately, the beams often cross, limiting your area of movement. 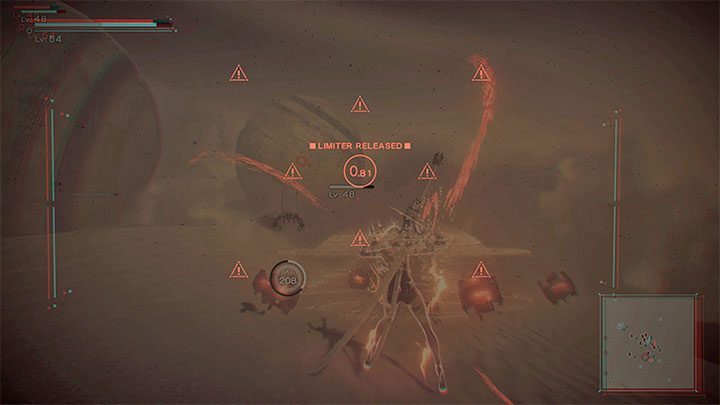 We recomment attacking the spheres with melee weapons to quickly deplete their energy points.

After some time, the Pod will inform you about the Berserk Mode, which you can now start using - it is activated by pressing both analog sticks (L3 R3) and allows you to inflict much more damage for a certain time. Unfortunately, this happens at the cost of health points and you need to protect yourself (preferably with appropriate chips) from suddenly finding yourself on the verge of death. 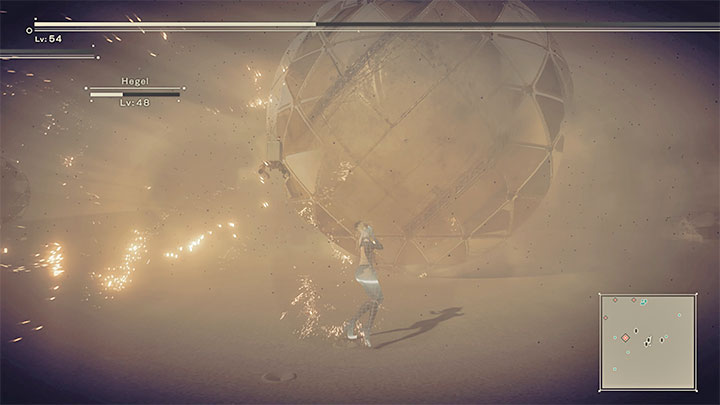 Attacked spheres surround themselves with a protective shield after some time - an example of such a situation is shown in the picture above. Each time you do this, finish attacking a given sphere and get to another (unguarder) sphere to start weakening it. 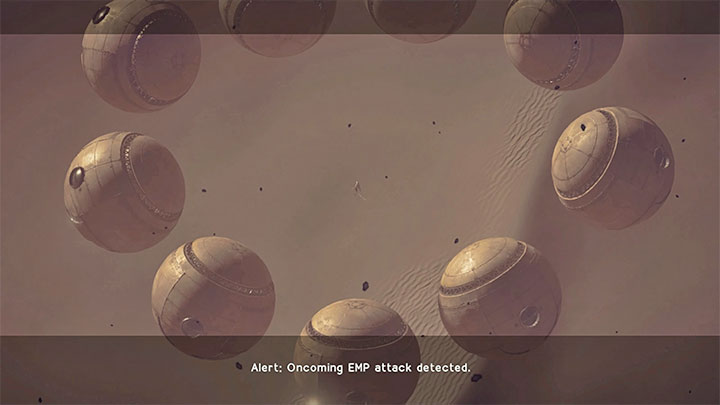 You have to repeat all of the above actions (attacking the "whole" boss in flight and single detached spheres) until a cutscene will play, in which the spheres will surround A2. Due to the boss's overall high resistance (even after using the Berserk Mode), winning the fight can take you even up to a few minutes.

The sequence in A2's memory 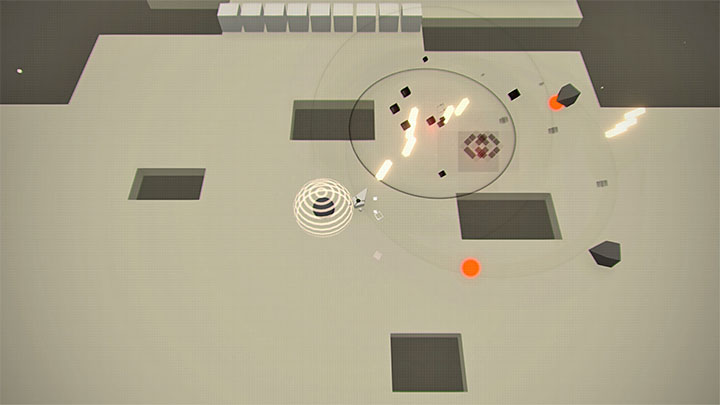 You will enter virtual reality. Start going through the subsequent areas where you need to play the standard hacking mini-games - you have to destroy the black objects to reveal the black balls and unlock access to the next section by destroying them.

Eventually, you will reach the place where the cutscene will play, and the chapter will soon end.

Selecting the next chapter 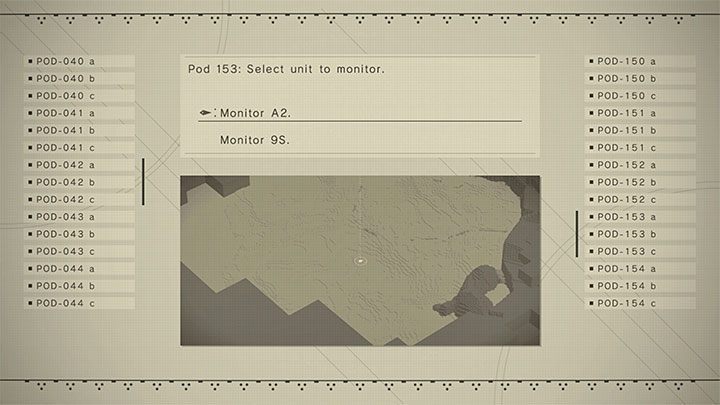 As in Chapter 11, you will be able to make a choice: