This page of the guide to NieR Automata contains a walkthrough of Chapter 9 which is a part of Route B. The following walkthrough explains e.g. how to complete the new 9S hacking sequence, how to help 2B fighting in the factory, how to properly remote control the machines and how to hack into the main factory system. 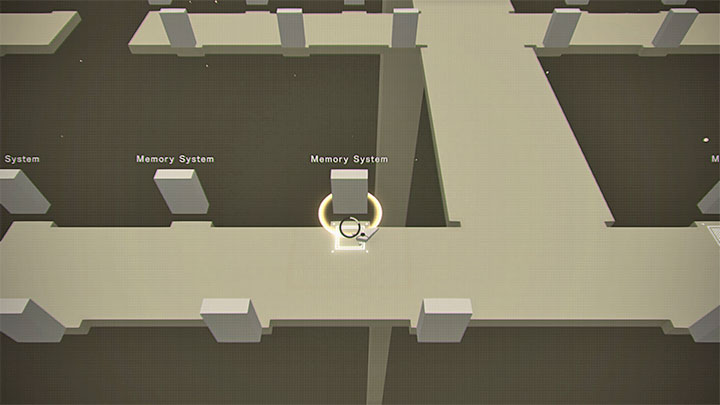 Chapter 9, just like Chapter 8, looks completely different when playing as 9S. Fortunately, in this chapter, you will find much more interactions and unique scenes than in the previous one, which was very short and linear.

You start at the Bunker and you have to Self-Hack 9S. Stop near the subsequent Memory Systems and hold the hacking button - they are to the left and right of the main path. In the next row, do the same with the Visual System. Finally, get to the Server and use the interaction button again. 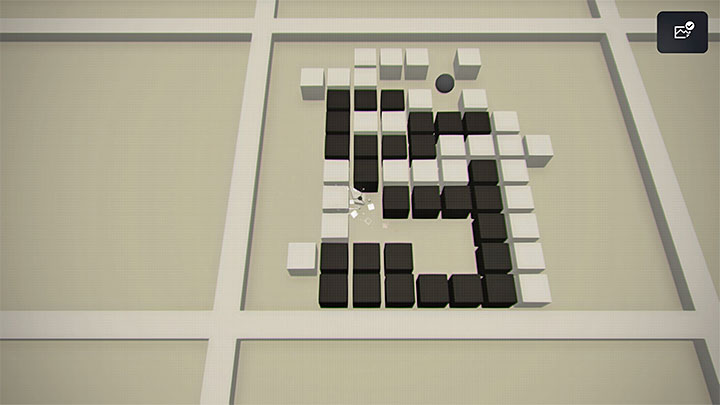 A path will unlock behind the servers, and you have to follow it. You will find new interactive servers in the new location, but this time, you will have to play some simple mini-games with obstacle courses where you will need to reach the black balls. Each tested server will add a new entry to the Archives. 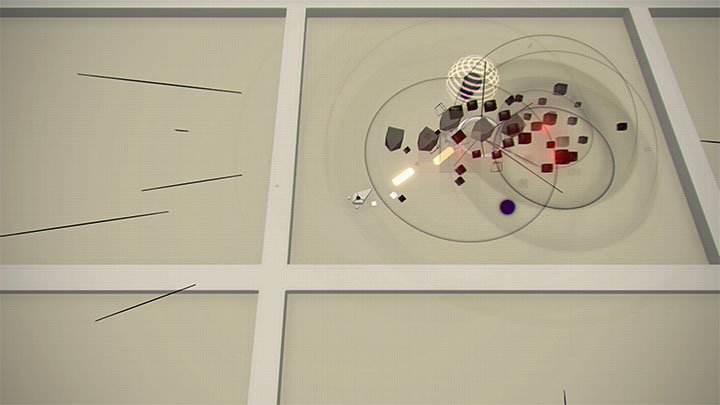 Expect a harder mini-game on a server that refuses access. As always, you must first destroy the black enemy objects in order to remove the cover of the black ball and destroy it.

Rescue 2B - remote control of machines 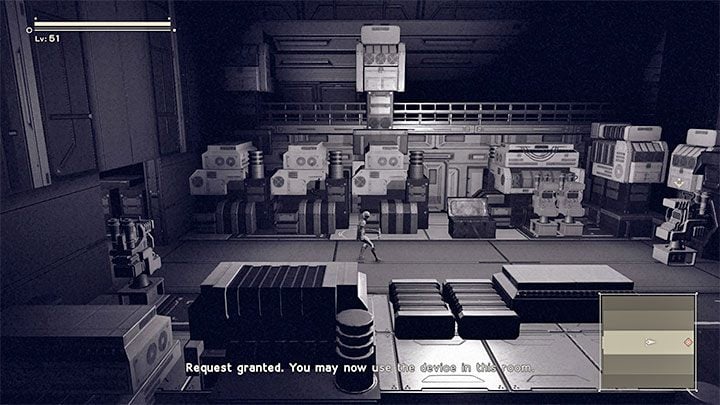 Examining 9S's mind will end soon, and you will return to 9S's room in the bunker. Listen to the operator and use the elevator to get to the Terminal. You need to interact with the interactive station in order to provide help to 2B who is fighting in the Abandoned Factory. 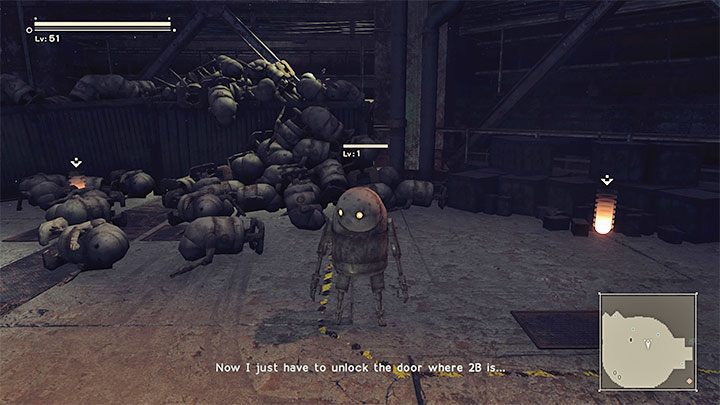 Once you're in virtual reality, reach the new white square and hold the hacking button. Now, you will take remote control of one of the machines from the factory for the first time. Here are the most important elements of this scene: 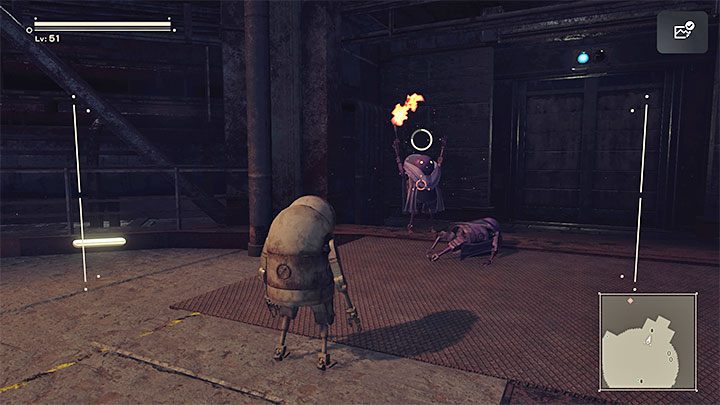 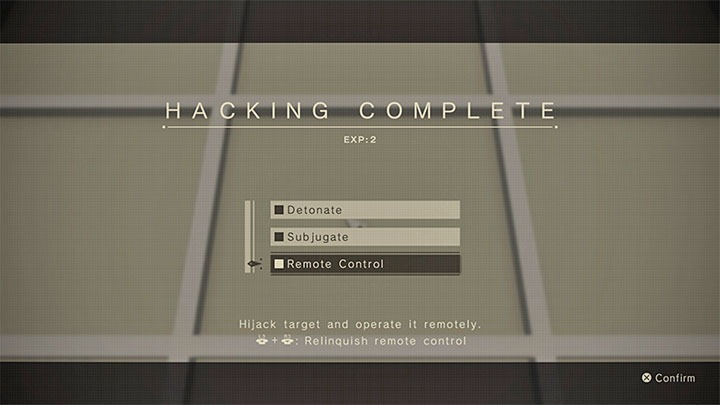 Soon after you start exploring the factory with the robot, you will have the first ever opportunity to switch to a more powerful machine, and you should use it. Each time, you must stand in front of the machine you want to take over, hold down the interaction button, complete the hacking mini-game successfully, and select the Remote Control option from the list (picture 2). 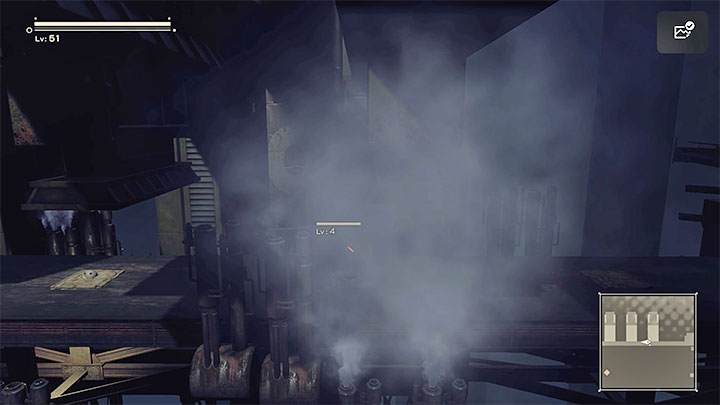 The exploration of the factory itself is linear and you don't have to worry about getting lost. You also don't have to join all the fights along the way; you can just keep going.

On the way make sure to watch out for the crushers; avoiding the first ones may be more difficult because of the steam. 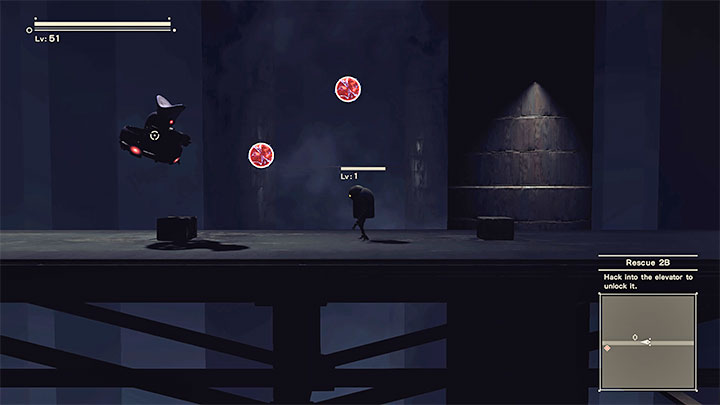 In the location with a large group of machines fighting each other, you can simply go to the with a blue lamp above immediately. In the area with the silo, be careful when jumping to the subsequent damaged balcony fragments.

Later, you will have a few opportunities to control new unique machines, including some flying ones. Again, watch out for the crushers. 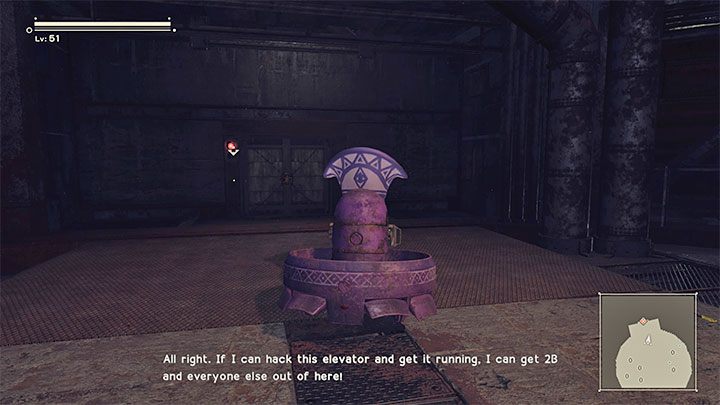 Keep going to the left until you reach the place from the picture above. Use hacking here to unlock the elevator for 2B.

Breaking into the factory system 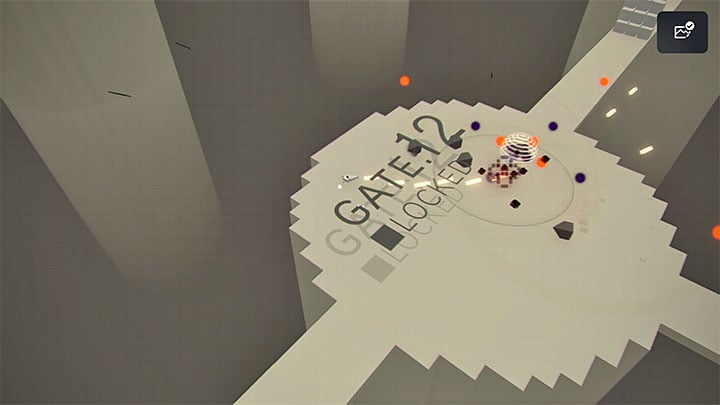 After talking with 2B, you will enter the virtual reality again. Two main types of activities are available in this sequence. First of all, you must reach the next Gates and engage in fights, where you obviously will have to destroy the black ball. After each won fight, stand on the white square and hold the Triangle to open a new gate for 2B. 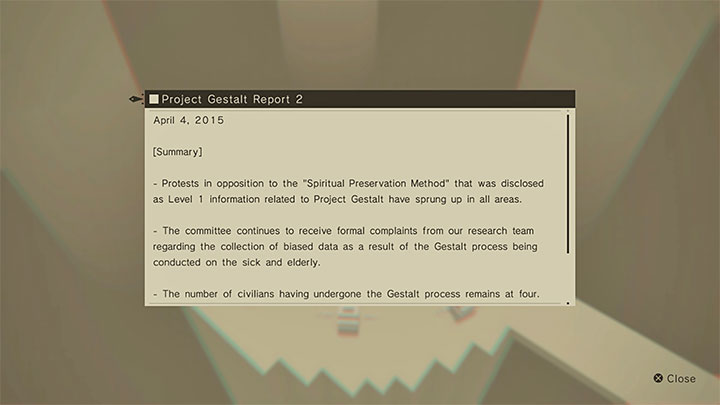 Additionally, you can optionally explore the side paths and thus reach places with new white squares. By starting to hack in there, you can unlock new Archives entries and at the same time expland your knowledge e.g. about past events. 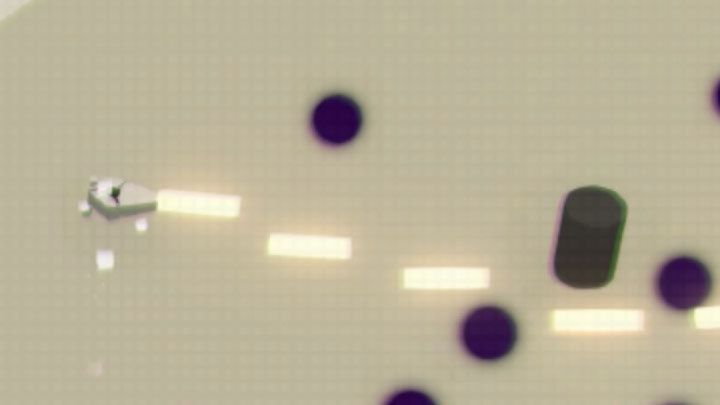 At the very end, you will take part in an attack on the factory mainframe. It's just a bigger fight, during which you have to remember about: 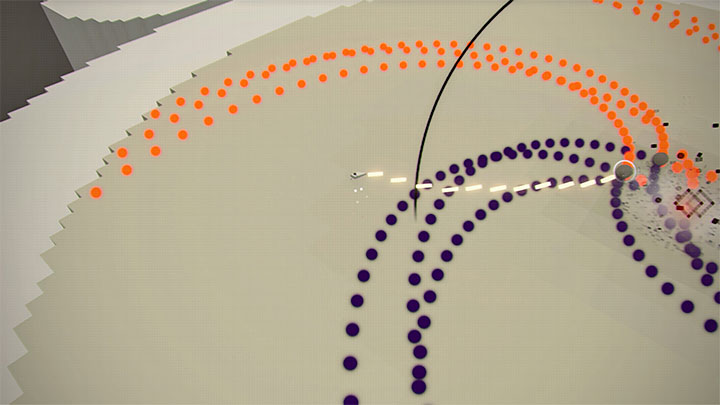 In the next stage of the hacking mini-game, the missiles will come in waves resembling working turbines. Try to stay between them to avoid colliding with any of the bullets and restarting the whole fight as a result. The ultimate goal is of course to destroy all the black balls located in the middle of the fighting zone.

If you beat the hacking mini-game, you will see a scene showing 2B's victory and the end of this chapter.