On this page of the NieR Automata game guide you will find tips on combat and how to win battles. You'll learn how to perform melee and long-range attacks, how to avoid enemy attacks and how to parry them how to recognize stronger opponents, what to do when you take damage, how to increase the combat capabilities of the controlled character, whether all fights are mandatory, and more. 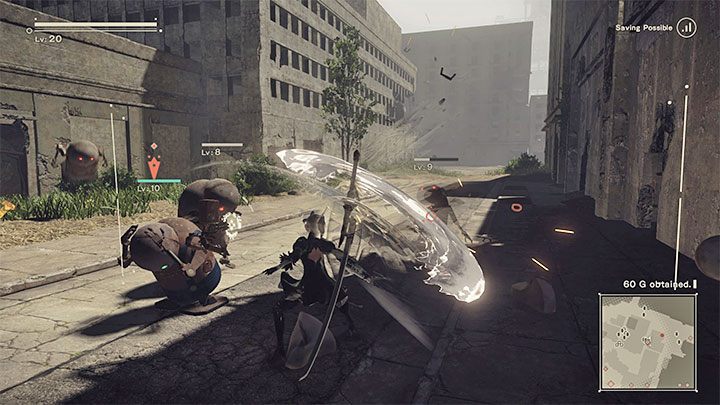 Different varietes of melee weapons are used in hand-to-hand combat. You can buy additional weapons from traders, find them in the game world (they are usually well hidden) or, very rarely, receive them as a reward for completing quests.

Your character can perform Light and Heavy attacks. You can also use light attack or heavy attack combos, as well as combine them with each other. For example, after 2 light attacks, you can choose to perform 1 slower, heavy attack. 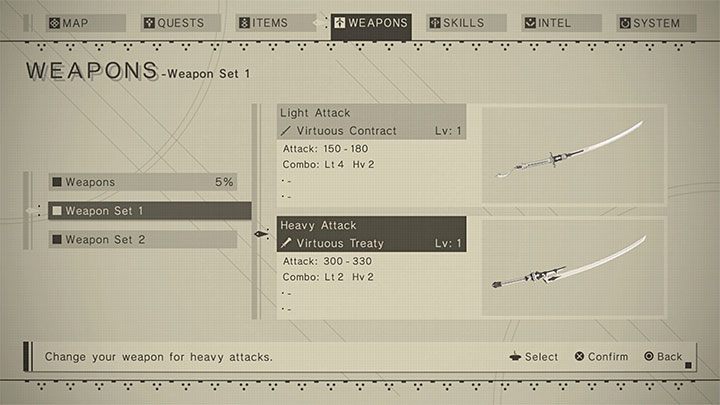 You can view and set weapons as active in the Weapons tab. The game lets you have two Weapon Sets at the ready in order to switch between them if necessary, without having to waste your time to manually switch out your weapons.

Within a given set, you can select different weapons for light and heavy attacks. Make sure to pay attention to the Lt and Hv parameters which indicate how well the weapon performs light and heavy combos. 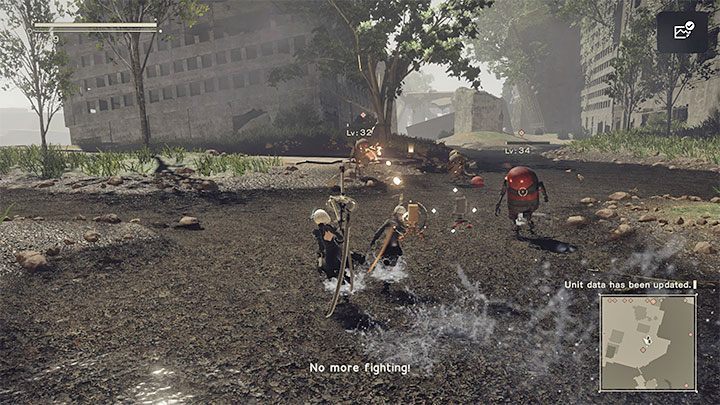 In ranged combat, the pod is used, which is a flying robot that accompanies the controlled character from the very beginning of the game. Whenever possible, try to continuously keep on firing by holding down the R1 button. Pod's ammo supply is unlimited and its gun can't overheat.

By default, ranged attacks aren't very strong, but they can still be used to dispose of weaker enemies and they can be helpful during fights against stronger opponents. You should only ever stop shooting if you encounter bulletproof opponents, i.e. those who have heavy armor or hide behind shields (in the case of the latter, you can resume firing once you get rid of their shields through melee combat). 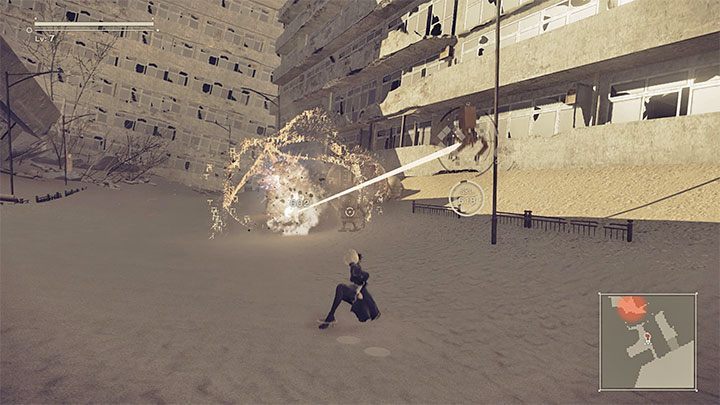 The pod also has the ability to use Pod Programs, i.e. special skills activated by the L1 button. Pod's default program is a strong laser attack and this ability will be useful to you for a long time. It's perfect for damaging single, strong enemies and attacking opponents standing in a row. Later in the game, you can acquire other pods and programs that can have a completely different effect. Similarly to melee weapons, it is worth having two different programs at the ready and switching between them when necessary. Interestingly, once you activate the first pod's program, you don't have to wait to use the programs of the other pods you own - you can activate them immediately after you switch to them, because each pod has its own cooldown.

Pod programs do not consume resources, but they will go on cooldown. By default, the length of the cooldown is displayed on the screen. Take advantage of this and use the special ability as often as possible. 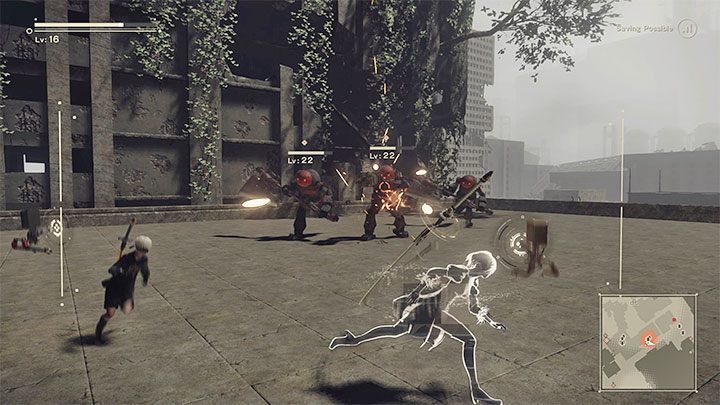 Evading is an extremely important part of the game. It is necessary to keep your controlled character in good health. As a reminder, you can dodge by pressing the R2 button (not the Circle button!) and you can additionally tilt the left stick to jump in the direction you choose.

You can also dash in mid-air. This method will help you in avoiding, for example, shock waves that spread through the ground, which is an attack performed by elite opponents. 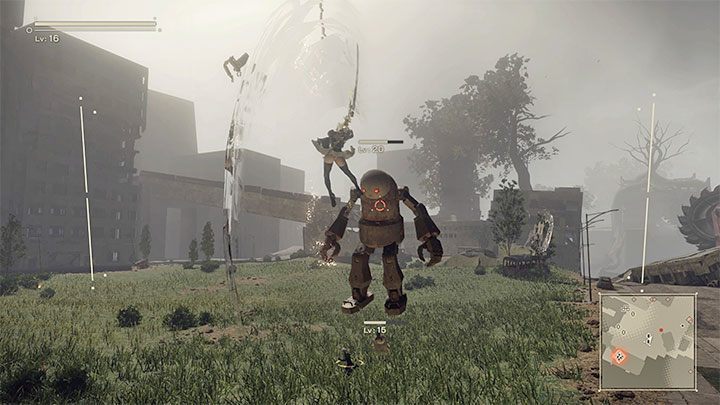 It's a good idea to combine dashing with frequent counterattacks. You will be able to counterattack whenever you perform a perfect dodge, i.e. if you evade just as the controlled character is about to be hit by the enemy's attack. Then, you will be able to perform a light, heavy or ranged attack. You will also have the opportunity to launch the enemy into the air and attack them in flight. This is a good technique to win fights faster. 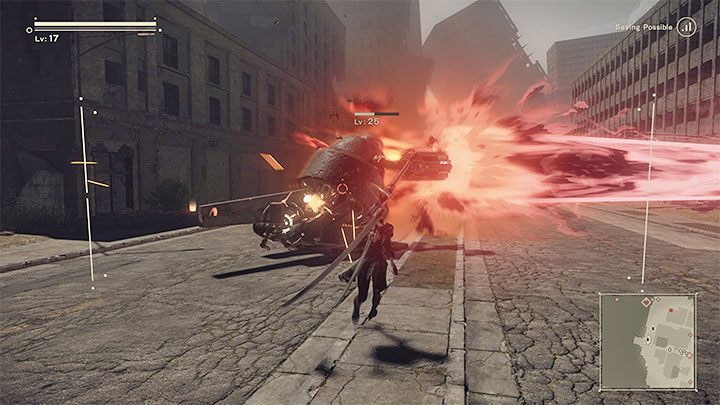 Numerous opponents can attack your characters at a distance. You have to be prepared for this and react accordingly. Interestingly, many of the projectiles launched in your character's direction can be shot down with the pod and thus stopped. If there are too many of them or they are a different type of projectile (e.g. self-guided projectiles), then try dodge them instead.

Enemies can also launch single powerful ranged attacks, e.g. laser attacks similar to the ones made by the pod. In this case, it will be necessary to dodge to keep your character alive. 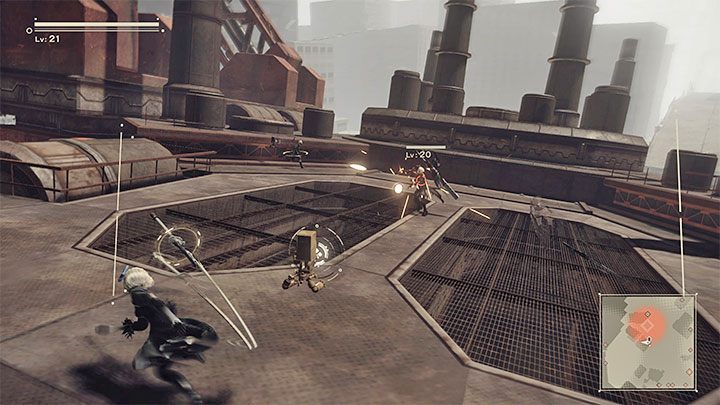 The camera lock-on mechanism can make attacking selected single enemies much easier. This option is only available on the easy and normal difficulty levels and if you have selected one of these levels, then you shouldn't voluntarily turn off the lock-on option.

Enemy tracking will make it easier for you to use ranged attacks because all projectiles (including, for example, the laser used by the pod) will be able to hit the enemy without the chance to miss (unless the target hides behind some obstacle). However, this mechanic is also useful in one-on-one battles as it allows you to react more effectively to your enemy's behavior. Watch out during fights against groups of opponents, however, because locking the camera on one of them may make it difficult for you to see the actions of other enemies, potentially making it easier for them to surprise attack you.

Taking damage and healing your character 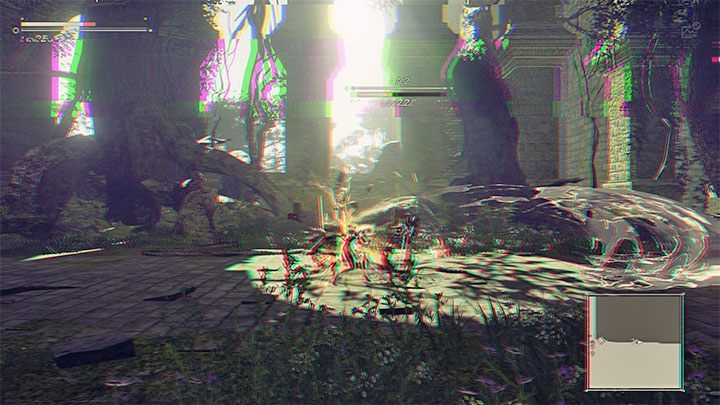 By default, there is no automatic health regeneration mechanism in NieR Automata. This situation can only be changed by installing one of the healing chips, for example, one that allows you to recover health points by dealing damage to opponents.

Recovery consumables can be used to regenerate your health and you should always have a decent stock of them in your inventory so that you can use them if necessary. It's recommended to always carry healing items with you during boss fights and when playing at higher difficulty levels.

For more information about health recovery, check out the Healing - how to restore health? page in the FAQ section of the guide. 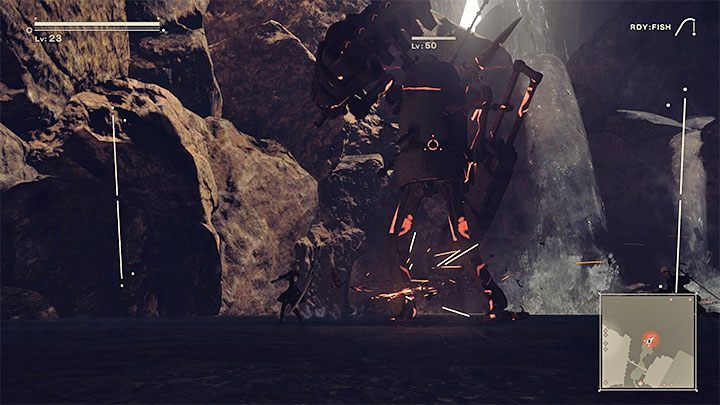 Every opponent encountered in NieR Automata has a specific experience level, which is by default displayed above their head (unless you remove the chip that provides information about your enemies from your operating system). This knowledge is not particularly important during the initial hours of the game, but it becomes more important in the later stages of the game. You should avoid fighting enemies who are at a much higher level than your character (e.g. over ten levels higher).

High-level opponents can be very tough and even heavy melee weapon attacks may not be very effective. They can also unleash their own powerful attacks. You will encounter many of these types of opponents in side quests and it's best to simply postpone these and complete them later, once your character is stronger (the enemy level shouldn't change in the meantime).

You can also skip battles with regular opponents, for example, if you want to quickly finish your current quest. This is not necessarily a good idea, however, as by eliminating enemies you can receive XP, loot and potentially new unit data (separate entries are collected even for slightly different variations of machines). 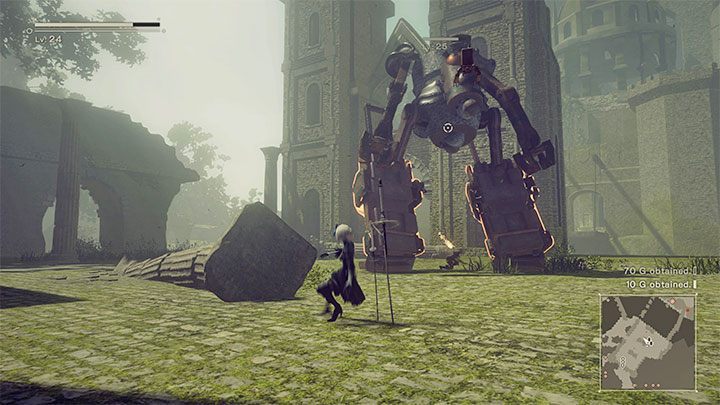 In NieR Automata, boss fights are quite common and we included each of these encounters in our walkthrough. You can expect to fight bosses in most of the main quests, although these battles can also occur during side quests.

During boss fights, you should mainly try to focus on avoiding their attacks, especially if they are more problematic (eg. a series of charges or a strong area attack). While you can weaken many bosses with the pod's ranged attacks, melee attacks will be the only way to effectively damage the boss. Make sure not to forget to restore your health, preferably from the system menu so that you can pause the game, giving you some time to choose the right recovery item. 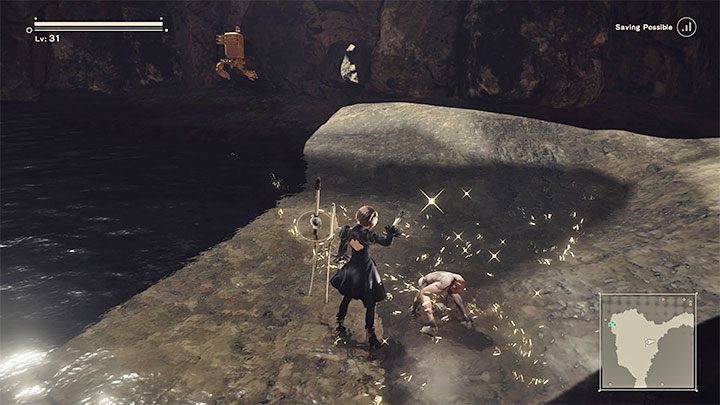 If you can, play online and with Network Features enabled. This will allow you to find the bodies of fallen players and one of the options is to revive another player's body. This will give you a temporary ally who will be able to take part in the battles. This will come in handy especially when fighting bosses and while playing on higher difficulty levels.

Try to check the experience level of the repaired Android - the higher the level, the more effectively they will be able to attack enemies. Although these allies only remain active for a certain time, they can still be a great help. For more advice, check out the Social elements page of our walkthrough. 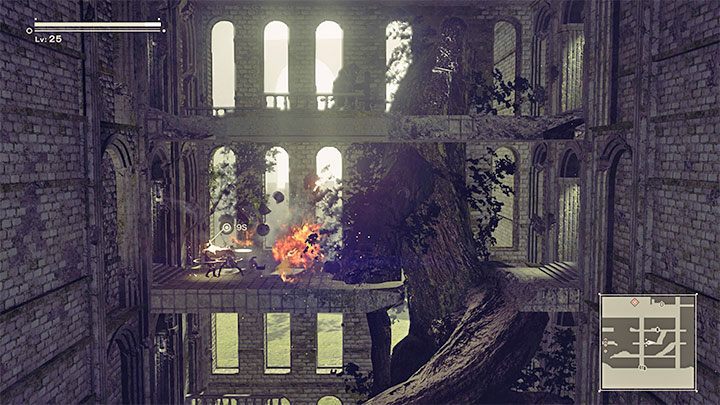 In some scenes, the camera position is imposed on you and this can make combat difficult. The side view is particularly problematic (example in the attached screenshot), because your character has very limited room for maneuver - you can't easily jump to the sides. Try to avoid being cornered in such situations and try to dodge or jump over your opponent in order to get to the other side of the battle area and have a little bit more room to operate. 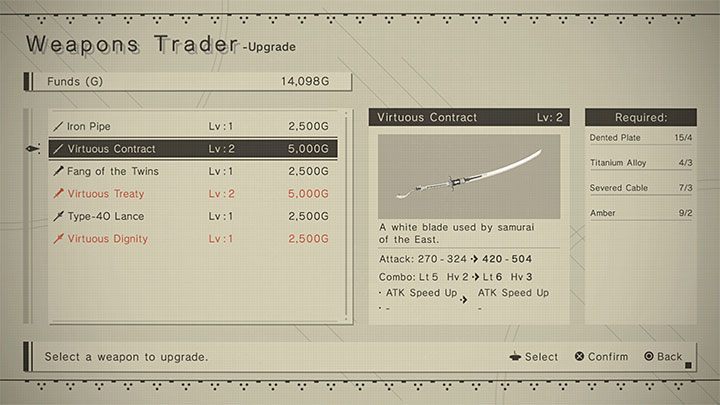 Each melee weapon that you obtain in the game will start from the 1st level. You should try to upgrade the weapons you frequently use so that they can deal more damage, as well as receive additional stats (e.g. higher combo strength).

Traders can upgrade your weapons and, for starters, you can visit the Weapons Trader at the Resistance Camp. Unfortunately, you will have to pay for each upgrade and also provide the necessary crafting components. Nevertheless, you should try to upgrade the weapons you regularly use to at least the 2nd or 3rd level.

For more information, check out the Leveling up your character and the pod page. 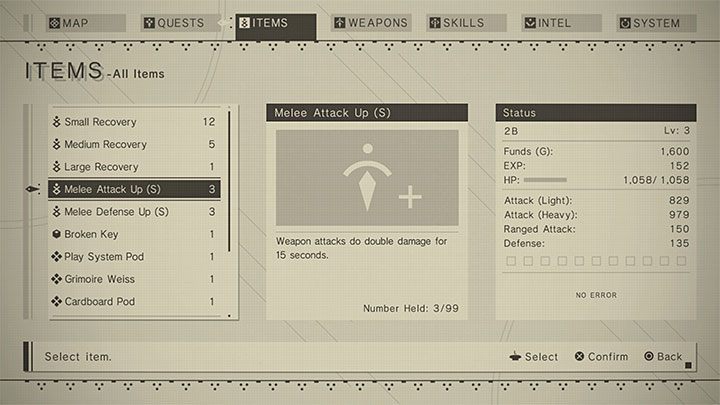 In addition to upgrading weapons, you can't ignore other steps necessary to increase the combat capabilities of the controlled character. The most important ones are: