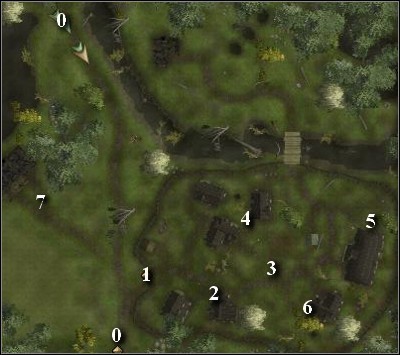 7. Goodwife Aruna - You will find her here during variant 2 of (West Harbor): Whispers in the Marsh.

Goodwife Aruna will ask you to find her shawl, which she lost escaping from the lizardmen. You will find it in the Dragon caverns, in one of the chests. Return it to Aruna to receive battle staff +1 (Constitution +2, casts Cure moderate wounds). 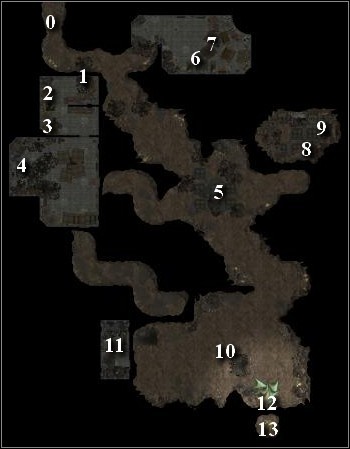 12. Magic barrier - disappears once the dragons are dead.

Lazlo will tell you about two black dragons about to attack the town. He will also tell you that the wizard Tarmas has left for the Dragon Caverns some time ago and never returned. Go to the caves. Once inside you will run into Tarmas being escorted out by two warriors. Don't worry about that for now and explore the location paying close attention to the traps scattered throughout the area. Take a close look at the barrel in one of the rooms. Lore will tell you that it comes from West Harbor. Head north. In the last room you will fight some lizardmen. Kill them and take the key from their captain's body. Now go to the cell in the east. Inside you will find Tarmas. Talk to him and give him the key.

Quest: Deal with the Dragons

After you return to West Harbor talk to Lazlo, whom you'll meet by the entrance to the location. He will tell you about his deal with the dragons and will ask you to help fighting them. First one can be found by the town gate. You can resolve the problem two ways: one is make a deal with the dragon and get 5000 $ for killing Lazlo and his men, and the other is to kill the dragon.

Variant 1: A deal with the dragon

Once you killed Lazlo and his men talk to the dragon. It will give you 5000 $, but won't let you into the village. You can unlock the path by fighting it. 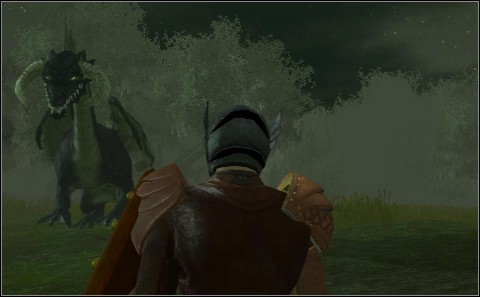 During the fight another dragon will appear. Killing the two isn't that much of a problem with the support of Lazlo, Tarmas and two other fighters. After the fight you will receive a new feat: Dragon Slayer (+2 attack bonus and damage bonus vs dragons). Collect the remains and talk to Lazlo. Thankful for your help he will allow you to create a trade outpost in West Harbor.

Quest: Path of the master

Received from: Aruna, after completing quest (West Harbor): Deal with the Dragons

Ask Aruna, what's new in the town. You will learn that the half-drow Quarrel seems depressed and needs someone to talk to. Approach him and start a conversation which will soon turn to Ammon Jerro. Using Lore you may tell Quarrel that the warlock most probably resided in Crossroads Keep . Half-drow will head there and you should follow. You will meet him in the keep, besides Khelgar. Talk to him to have him join your party.

Quest: Whispers in the Marsh

Received from: Aruna when you return to West Harbor after some time

Circle of the Mire 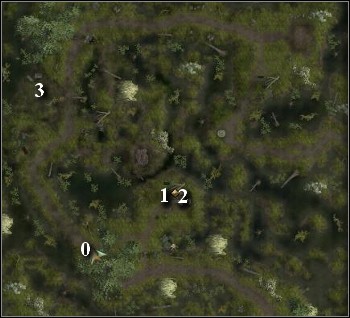 Aruna will ask you to investigate a cult in the marshes and convince Jan Buckman to leave it. Go to the location she points to and talk to Jan. Try convincing him to leave, but he won't agree. Talk to Sheydann Zinn. You now have two options:

During the conversation with Sheydann try to convince Jan that he is being lied to. Sheydann will lose his temper and attack you. Kill him and the cultists and take the scimitar +1 (1d4 additional negative energy damage, saving throws vs poison +1, drains Strength on hit). Once again talk to Jan, who will give you an amulet (cold resistance 10%, Constitution +2, saving throws vs mind-affecting spells -2). Return to Aruna who will give you your reward: gloves (saving throws vs poison +3, regeneration +1, acid resistance 5).

Make a deal with Sheydann and tell him you can kill Aruna for him. Return to West Harbor and approach Aruna standing outside the city gates, in a garden. Kill her to get a new feat (+2 bonus vs neutral and good creatures), then return to Sheydann, who will hand you 1000 $.