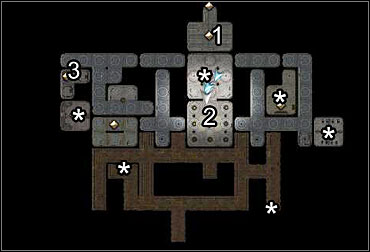 It's time to deal with the most frustrating puzzle in whole Neverwinter Nights 2. Talk to Balaur's ghost (1) to get some details on the situation. In the next hall defeat all the undead and you'll see the first ghost. You have to find six of them (*) and lead them to the tree in the middle of the level (2).

HINT: At (3) you'll find a rune needed to reactivate the construct.

Each time you find a ghost, you'll first have to defeat its lich form, and then talk to him in order to tell him to follow you. The trick is that they don't just "follow" you as other NPC, but move along paths set by the lanterns you can see all around the mine. When a lantern is lit, the ghost can't use the path it guards. You have to switch the lanterns on and off in order to set the proper routes for the ghosts. Each time you click the ghost, he'll move one "step" forward. Be sure to cut off his retreat then because they generally tend to head anywhere but where they should. It's best to ensure that a ghost has only one possible move to make, and it's the right one obviously. You just have to get the hang of it, it might seem weird but it gets simple if you don't hurry too much. 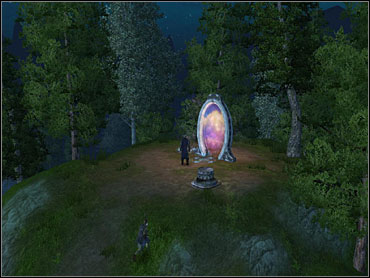 When you gather all the ghosts, the tree will transform into the next statue. Activate it and leave, then go through the portal in the middle of Arvahn (A5).