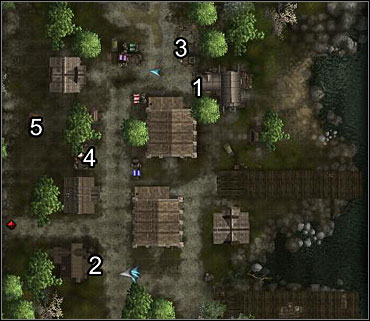 Sand'll tell you to find Haeramos, so enter the local garrison (1) and talk to the man. Persuade him to let you interrogate the witness. You won't get much from Alaine, but every piece of information will eventually prove valuable.

Go to Aliance Arms Inn (2). Talk to Felgor the innkeeper and Elgun, who's spreading some serious gossip about you. Talk to a ranger names Malin using all the dialogue options and you'll probably notice that some of what she says contradicts Elgun's version of what happened. Now go and ask Haljal Trondor (3) a few questions. He'll also point out that Elgun is not to be trusted. You now have enough proof to tell Elgun to never spread any gossip again.

Look around the city and start the two side-quests indicated below, then go to Duskwood.

HINT: Malin might not be in the inn until you're back from ruined Ember, so if you haven't been there yet don't panic if you don't see her.

HINT: Before entering the inn you'll be engaged in a conversation by some local guards wanting to impose law on you. You can fight them or talk your way out of that.

In Alliance Arms Inn (2) in Port Llast you'll meet a girl named Calindra who's waiting there for her missing father Bradbury. He was last seen in Duskwood. You'll find him in Milli & Jilla's cave in there. Check out the Overly Clever Arachnid quest for details. When you find him, she'll ask you to find a job for her. You'll be able to help her later in the game, when you take over Crossroads Keep.

Nya, the owner of a little store in the central part of Port Llast (4) will ask you to take care of the dead bodies left in Ember. When you're on the spot, use the magical powder you got from her on each body. When you deal with all of them, you'll get a journal entry confirming the completion of this mission. Go back to Nya and she'll give you a decent amulet for your trouble.