The following quests are almost identical no matter if you're with the gang or with the city watch, the only difference between them is from whom you get the instructions: Axle Devrie or Captain Brelaina.

Quest from: Axle Devrie (only if you're with his gang)

When you were chasing orcs in the mountains, Axle and Moire found the traitor among their ranks. His name is Fihelis and he's living in Merchant Quarter (N2-4). Eliminating him will be your next task. Axle suggests that you do that without unnecessary bloodshed, while Moire wants you to send a message that your gang can kick butt when it needs to. 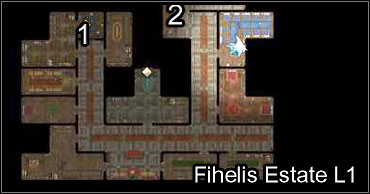 The guards near the entrance can't be avoided - you have to fight them. Once you're inside, you can either kill everyone or send a sneaking person (preferably Neeshka) to reach the stairs (2). You can also pay a visit to a vault (1). 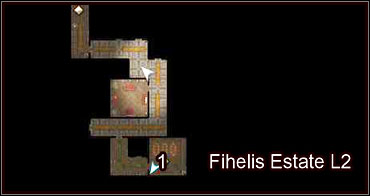 Your true intentions of dealing with the matter quietly will be now blown apart by a sergeant who'll know of your presence no matter how well you are hidden (that's lame scripting there!). You'll have to fight his unit. Go where Fihelis is hiding (1). He'll propose a deal - you cover his escape and he'll give you 1000 GP and a gem stack Access (N2-*). Do as you will, Axle won't know even if you cheat him on this.