Talk to all 4 quest-givers (the quest Ship Sabotage is obligatory, the rest are side-quests, but they can be easily completed all at once) and agree to help them, then head North, to Shandra's farm. Talk to Shandra and she'll tell you to go to Highcliff Castle. Do so.

The first person you'll see around here will be William (1). As it turns out, he escaped his wife Juni deliberately and doesn't want to go back. You can solve this in a few ways, but the reward will always be the same. Do as you will, convince him to go back or lie to Juni that he was killed or anything. 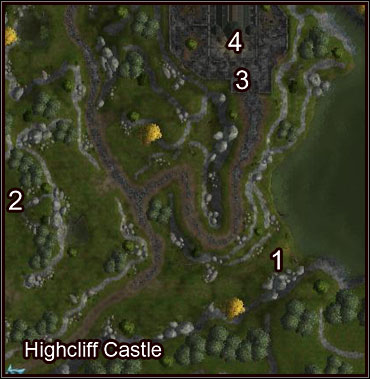 Next, find the two kids, Alex and Andrew (2). Defeat the wolves surrounding them and talk to them. You can agree to lie to their parents or rebuke them. It doesn't matter when it comes to rewards.

Head to the castle. You'll see a lizard named Slaan (3) in there who's fighting the undead. Help him defeat them and he'll propose a deal: you help him find the missing kin (lost somewhere around the ruins) and he'll take you to his chief. There is another way of solving this, you can just kill him and take the lizardfolk hideout map off him. The second solution is more evil of course. We'll go through both of them.

If you decide to kill Slaan, you'll see a message on your screen saying that you've found the Lizardfolk Lair map. Go there. Slash through the guards to the cave entrance. 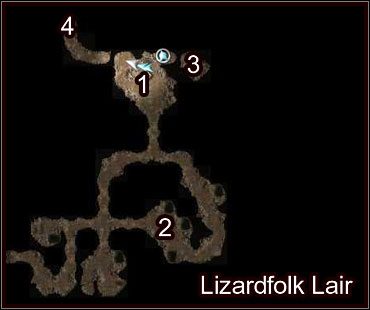 Inside, you have to reach the chieftain's chambers (1). Along the way it's good to grab a chest (2) and get a cool weapon (One of Many) from it. The chief is a tough opponent, as he's got a lot of bodyguards near him. You'll get a few cool magical items from him, though. Check out the vault (3) and leave the area using the shortcut (4). Go back to Highcliff and tell Mayne about your deed. The ship will be ready for you. 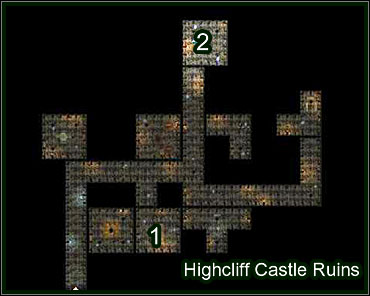 The second, more interesting way of completing this quests leads through the castle ruins. Agree to help Slaan find his folk and go down to the dungeon (4 on Highcliff Castle map). Go along the main corridor and you'll see a cut-scene with another shadow priest (1). You have to fight him. Just as before, focus your attacks on the priest himself, ignoring his undead soldiers. Notice that the zombies around here are Undead Adventurers, apparently the ones that Mozah wanted you to find. When you kill them all, search the bodies and take all the items (especially Mozah's Backpay).

Besides that, there's not much to find around here, but nonetheless take your time to search the whole level. The warriors you are looking for are at (2). Talk to them and tell them that you just want to talk with their chief. When you're there, try to negotiate (it doesn't take any special skill to succeed in that) or just kill everyone around. The latter pays off very well (you get items for completing both ways in this quest), but is extremely difficult. When the fight breaks out, you're standing in the middle of the room that's practically filled with enemies. If you feel confident in your abilities, go ahead and try. If not, try the peaceful solution.

When you're back to Highcliff, it will be time to gather rewards for the quests you completed. You can give the 500GP you found to Mozah or lie that you weren't able to find it (your reward would be 150 GP if you gave the gold back). Tell Juni about William (truth or lies). Talk to Gera and Zachan and you'll get their family amulet for finding their kids. Last but not least, talk to Mayne. If you decided to negotiate with the lizards, you'll also have to convince him that it's the right thing. If you succeed, he'll ready the ship to Neverwinter for you. 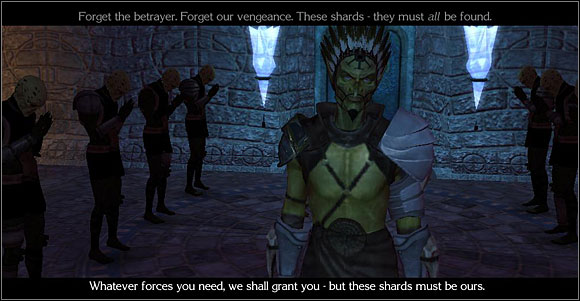