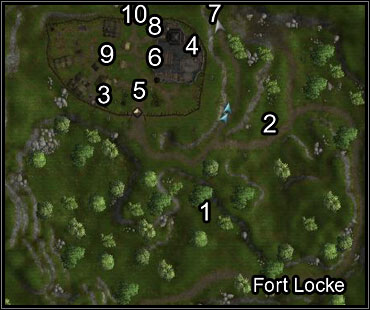 Immediately after entering the are you'll see Galen (1), whose bodyguards have decided to turn against him. You can rescue him (150 GP, 1 point Good) or kill all 3 of them (1500 GP, a nice Rapier and 3 points Evil).

Go further and you'll meet Neeshka (2) ambushed by 3 Fort Locke guards. Help her defend against them (what you say is once again unimportant, hah). Her skills will prove invaluable during the rest of the game, provided your main character is not a rogue.

You'll eventually reach Fort Locke, where you'll get a few interesting quests. You'll also find an armorer in here (3) and a craftmaster, who'll explain the basics of crafting to you (4).

First talk to Marshal Cormick (5), then to Vallis Anton (6). There will be two new quests in your journal that both can be completed almost simultaneously. Gather your strengths and head for the cemetery (7). Before you reach it, you can optionally pay a visit to Swamp Cave for some experience and equipment.

The Mere of the Dead Men

This area is not related with any quest, it's plain exercise. You'll find some gold here [(1) and (2)], a miniboss spider (3) and a cave entrance (4). In the latter there's the chieftain's chamber (5). You'll get some interesting equipment off him. Look around the dungeon and then leave. 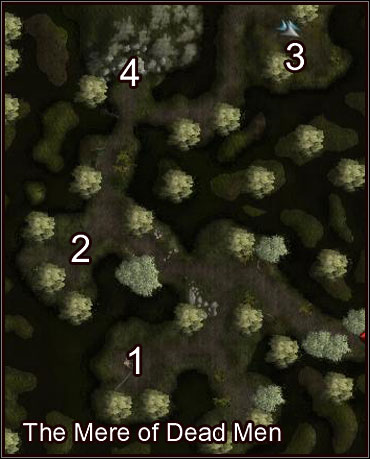 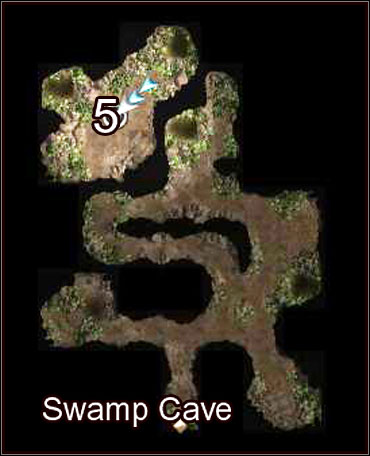 On your way to the graveyard you'll be approached by a group of bandits who'll want some money from you in exchange for safe passage. You can negotiate or fight, the choice is yours. Don't miss their chest near the encampment, there are gauntlets that give you +6 Concentration in there. 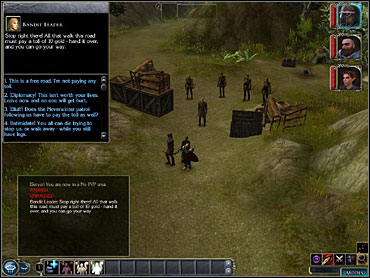 The same thing happens if you decide to go to Bandit Camp first. 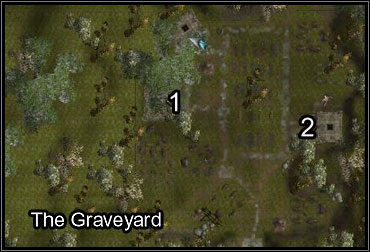 When you're at the graveyard at last, you'll face a large group of the undead. There are two crypts in here: (1) and (2). Let's start with the first one. 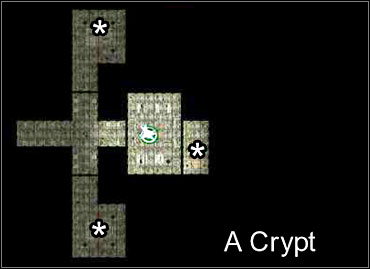 This level is full of traps, but all of them can be easily disabled by Neeshka. There's nothing quest-related in here, but it's still worth to check out the chests' contents (*) and have some exercise fighting the undead. When you're done here, leave and head for the second crypt. 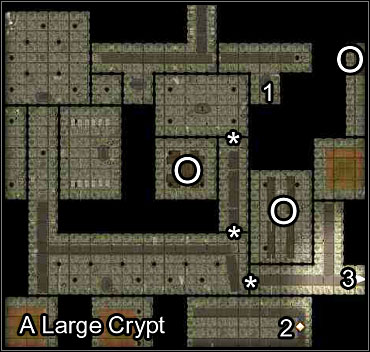 Again, most of the doors and corridors are trapped, so don't hurry and disarm them one by one. You won't find any special treasures in here, but take your time to penetrate the whole level. There's a chest containing a Falchion +1 and a Ring of Insight (1).

In (2) you'll see a dark priest conducting some unholy ritual. Defeat him (focus your attacks on him, leaving the zombies for later), and then grab all the items he had on himself. Also, search through the chest by the wall. Talk to Tann who's standing nearby - he's the one you were searching for. Join up with him and use the lever nearby. That will open the unpickable locks around (*).

Tann will ask you to find three of his missing men (O). One of them will be already dead - click on his body and he'll be counted as found. When you're done with everything around here, leave using the shortcut (3).

When you're back to the fort it will turn out that Vallis isn't going to let go of his power that easily. You can fight him or convince him to give up. Once again talk to Cormick and Tann.