Most important part of exploring the world and leveling your character is doing various quests, you can get them from NPC, from the item, or from "New Unlocks" window appearing after each new level.

There are quite a few different icons used to mark quests and quests stages. New tasks are visible as exclamation marks in diamond:

Question mark means NPC who will accept completed tasks and give you rewards.

Other important tasks are diamond markings, blue box on the map and a yellow balloon conversation.

Right at the beginning of the game you'll meet Sergeant Linkiettera who gives you the option of returning "Signs of Life" quest. When you start talking screen will change to a more "cinematic" and you will see the conversation window. 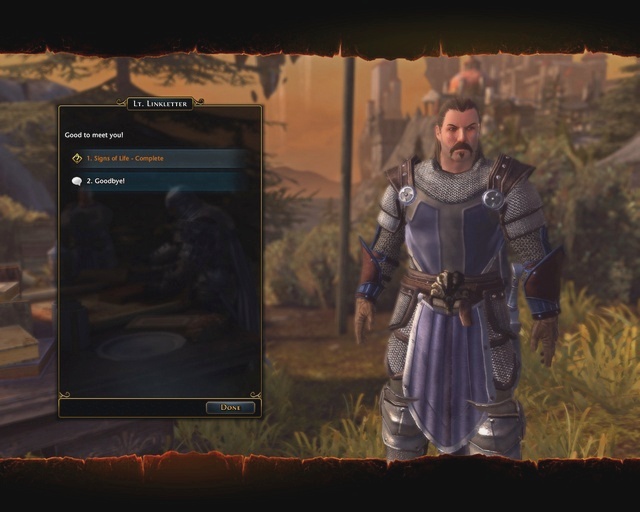 Dialog box choices are marked in different colors. White text generally does not affect the conversation. Another possibility is the yellow text, it's an important element in the story of the quest. If there is yellow exclamation mark in diamond near this text it means new quest.

Sometimes dialog option will be grey, this means inactive choice at the moment or if it's light grey - already chosen option.

Red text finishes the dialog or whole quest if there is question mark icon on the left.

After receiving the rewards you can look for new quests, most of them are visible on map right away, but in order for some to show up you have to get closer. Some quests are given by items.