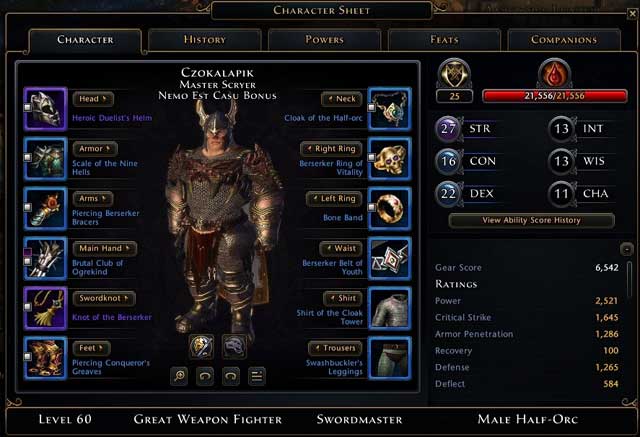 You can open your hero sheet by pressing "C" key, you'll find all there is to know about your character here, his abilities, statistics, items equipped, talents and companions

In Character tab you can find your hero preview and right under it tools for zooming and rotating hero and switch between town cloth and armor. Over your character is his name, title and guild and on the bottom of this window his class, level and chosen Paragon Path.

On the right side of this window is collection of all most important statistics of your character::

Health points: how much life your character have

Gear Score: your equipment evaluation used to give basic orientation how well you will play in harder areas

Below Ratings is a list with various values calculated from all other sources. Those are final calculations.

In Neverwinter main statistics (Ability Scores) are not increased by equipment, you can only roll initial values of AS and then add few points while leveling.

There are six Ability Scores and each class benefits from them in different way:

Each class have one primary ability and two secondary, remaining 3 won't have much impact on gameplay.

When creating new character notice that primary AS will have most points, secondary will also be high but not that much, and remaining AS will be lowest.

Every class have its own unique combat powers you can use. After each level you will be awarded one Power Point which could be used to buy new skill or upgrade already bought.

Excluding class mechanic each skill can have maximum 3 ranks, first is earned when skill is bought, next two you can buy for additional points (buying rank 3 is available after reaching level 20). 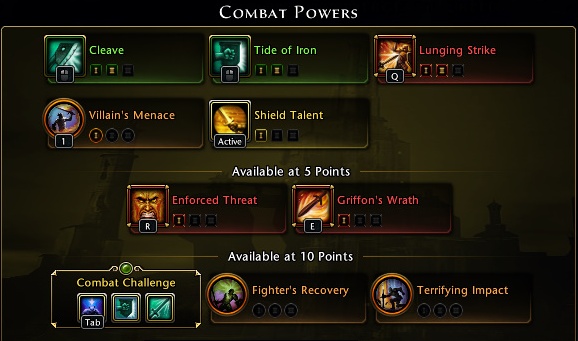 Upgraded skills can have stronger damage or healing, faster recharge, longer duration. It's worth investing additional 2 points in skills you are often using.

After level 10 you can start buying Feats, that is talents with passive enchantments to your character. 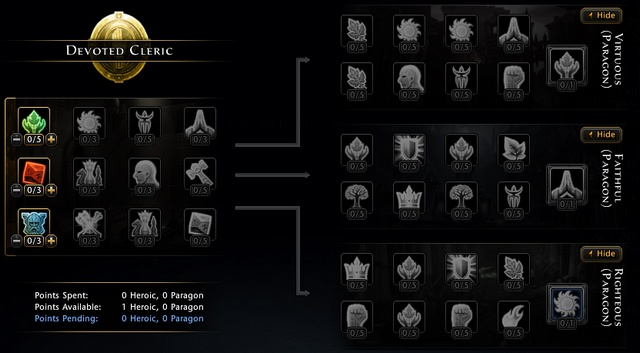 Each Feats tree have one very powerful passive talent at the end you can buy for only 1 Paragon Feat Point.

Skill bar in Neverwinter have only few buttons and indicators:

1: Two Daily powers, hexagon with Action Points, and stamina bar above it

6: Health bar and mount icon on the right

At-will powers are basic skills without the cooldowns fired when clicking or holding left/right mouse button.

At-will skill are not too strong, but 2-3 hits from such power should kill regular foe, those abilities are great to fill up wholes between using stronger powers, often At-wills enchance other types of skills

You will unlock first at-will skill slot at level 1 and second at level 2.

Three much stronger powers than At-will, those skills in most cases have at least 10 second cooldown and often in addition to damage or healing encounter skills can have some additional effects like increasing damage after use, marking enemies, kicking them, allowing you to jump or teleport etc

You will unlock encounter power slots on levels 3, 5 and 7.

Passive skills enchancing your hero in many different ways. Wisely selected Class Features can change your gameplay completely (they are often modified by Feats).

First Passive skill will be awarded to you upon reaching level 4, and you can learn another one on level 15.

Daily skills fortunately can be used more than once per day, they are simply the most powerful skills your character have and their use requires 100% of Action Points (hexagon in the middle of the skill bar), using daily power empties Action Points hexagon.

You can refill Action Points by attacking, healing or taking damage (depending on your class), because Action Points refill rather slowly think twice before using Daily Power.

Daily Power slots are unlocked at levels 4 and 19.

Class mechanic is unlocked on level 10, it's different from typical skills because in most cases it will affect your other actions and powers. You have only one mechanic, you can't change it.

Each class in Neverwinter have different tactic skill allowing to dodge or mitigate incoming damage. You can activate tactic by pressing or holding "Shift", this will make your character dodge, sprint, block, teleport etc (depending on class). Time you can sprint or uses of dodge for example is determined by your stamina, each use of class tactic will use part of it and you won't be able to use tactic if you don't have enough stamina. Stamina refills itself.

Only Guardian Fighter doesn't have stamina, instead he uses guard meter.