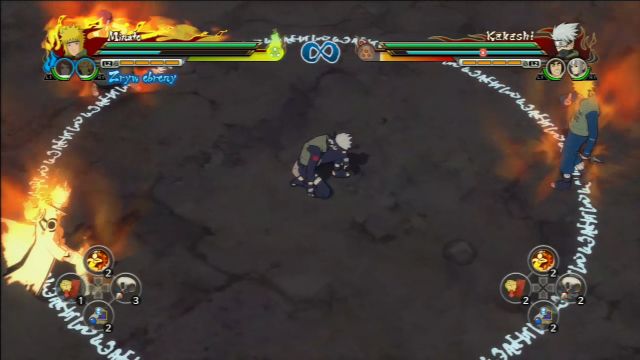 Seal Barrier will weaken your enemy.

Before most of the fights (excluding those played during the ninja tournament), you will have a choice to select a type of team. It unlocks and restricts the usage of special, unique abilities of your character (on his own, or with the assistance of his supports). There are three types of teams: Ultimate Jutsu Type, Awakening Type and Drive Type.

By selecting this type of team you will unlock the ability to use Ultimate Jutsu of your character (or your team). It's basically an empowered version of your regular jutsu, dealing considerably larger amount of damage (it can be activated by using chakra overcharge and attack). After you fill your Storm Bar completely, you will be able to use an empowered version of this attack, dealing even more damage.

A team type giving you access to awakening - by activating it, you will increase the effectiveness of your character, increasing his/her speed, strength of attacks, or totally altering the skills. During the awakening state you will constantly lose chakra and you can't charge it - if you deplete your chakra completely the effect will end (you can also stop it yourself).

After you fill your Storm Bar completely, you will be able to activate True Awakening. This mode alters your character completely, and some of the characters will be transformed as well. During this mode your attacks will deal a lot more damage, your speed will be increased, and you will be given invulnerability to basic thrown weapons (like kunai or shurikens). After several seconds the effect ends and the Storm Bar is depleted.

A team type concentrating on the usage of your allies (support). By selecting it you won't be able to use your ultimate jutsu, nor true awakening, but you will increase the effectiveness of your supports, by unlocking additional abilities, such as: