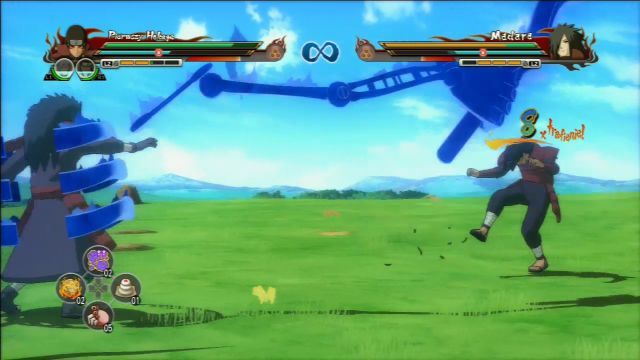 Madara's attacks are irritating because of their long reach.

The last ally event in the game, at the same time being one of the biggest challenges, as far as the difficulty level goes. To begin it, you will have to find the evil duo - Madara and Obito. Teleport to the B Rank Tournament Reception and go through the Eastern tunnel to enter the cave. Get to the crossroads and go through the Northern tunnel. Stop by the precipice and turn to the left - you should be able to see your target in the distance. Jump across a few ledges, collecting items in the process, and begin the conversation.

You will have to win two fights - first with Madara, the second one with Obito. The first enemy specializes in close combat, and thanks to his attack in middle-ranged combat. This encounter is arduous, as it's hard to dodge his attacks - the best choice is to fight him with a mobile character (Minato, or Shisui) or a character with similar damage output (like Hashirama). The second bout is a lot easier - Obito also specializes in close combat, he's a lot faster than Madara, but his attacks lack the reach and power of his companion. Fortunately, you won't have to fight them both and the event ends after those two rounds.

You will be given: