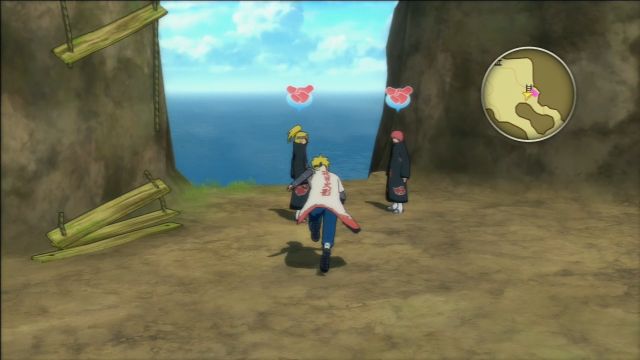 One of the ally events unlocked after the completion of preliminary round of A Rank tournament. To begin it, teleport to the A Rank Tournament Reception (Festival Plaza) by using the Teleportation Ninja. Leave the building and turn to the right (North). Run along the narrow passageway until you reach an open space and locate the ninja duo standing near the broken ladder. After a short while you will have to fight them - once with Deidara, the second time with Sasori.

Both encounters are very similar - the enemies specialize in long-ranged combat, which means that a mobile, close-ranged characters are especially effective against them. You should know both of them if you finished the Ninja Escapades. After you've defeated them both, you will have a short conversation - select "Both were weak" answer. It will make them mad and you will be fighting a final bout - with both of them, and Deidara serving as the "main" enemy. The encounter is the same as before - remember to not lose a lot of health during your first two fights, as it won't regenerate for the 3rd round.

After you've defeated them for the 3rd time, you will finish the event and be given: