An ally event, which is unlocked along with the completion of the Rank B tournament. You can begin it on the Festival Beach, near the place you land on the beach each time you start the ninja tournament mode. Approach Mei and Second Mizukage and start a conversation. You will have to deliver a few items to finish the event.

First things first, use the Teleportation Ninja to reach the B Rank Tournament Reception (Festival Beach). When you arrive, jump from the rocks and go North - you should be able to see a character with which you must speak (a pink icon above its head). Deliver the swimsuit to the NPC, and after a short while you will be given a Lamp in return. You must deliver it to the cave. Go back to the Teleportation Ninja and teleport to the C Rank Tournament Reception (Festival Cave). Jump down to the lower level and go North - you will find another NPC there. Speak with him, give him the lamp, and you will be given ice. 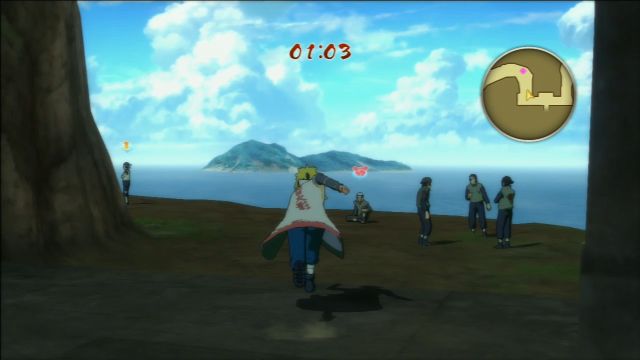 Now you will have to face the most difficult and annoying mission in the game - but only if you aren't using this guide. You must deliver the ice to an NPC standing near the cave entrance. The thing that makes this quest annoying is the time limit. Climb up back to the middle level, and run into the tunnel on the right - run all the way North, until you leave the cave. Go outside with the North tunnel and on the crossroads turn to the left and speak with the NPC sitting on the ground - give him the ice, and you will be given water containers.

Go back to the Festival Beach (with the help of Teleportation Ninja, for instance) and go to the Festival Fountain, near the lottery point. Speak with the NPC, give him the containers and after the conversation is over, go back to the beach to end the quest. You will be given: