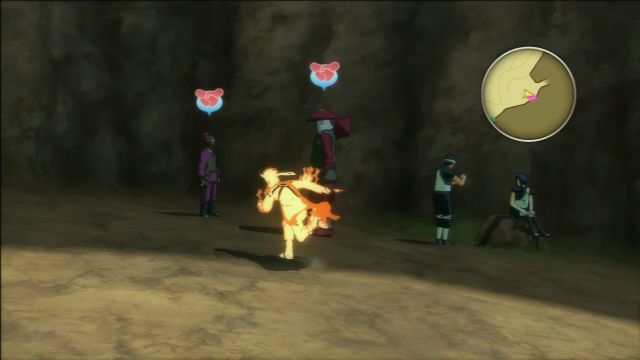 This time this is the only ally event unlocked after completing the preliminary round of Rank B tournament. To begin it, go East from B Rank Tournament Reception - at the entrance to the cave you will encounter two ninjas - Han and Roshi. After a short conversation you will learn - it can't be! - that you have to fight again. Accept the challenge and select those answers for the given questions:

After this you will begin the first fight, with Han. The encounter is trivial - his attacks are powerful, but extremely sluggish, and because of that they are easy to dodge, or even interrupt. After you've defeated him, you will have to face Roshi, in his True Awakening state. You will be fighting a tailed beast. The fight isn't all that difficult, but you should remember to don't attack the enemy too openly - his sizes gives him the ability to attack you during your own combos (the enemy is not "stunned" with your attacks). It's better to use hit & run tactics - get closer to him, attack him a few times and jump back afterwards. Rinse and repeat and the enemy should soon be down.