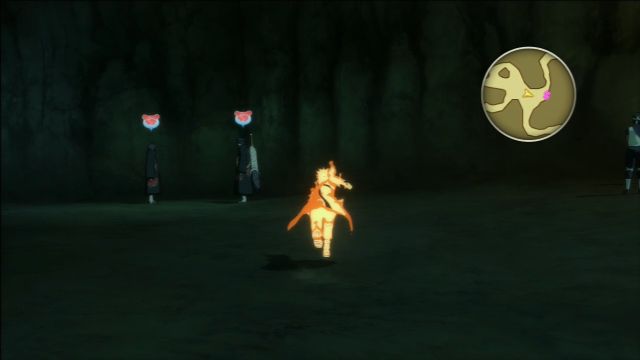 The event starting location - an annoying encounter awaits you!

The second ally event unlocked after the completion of the qualifying round of B rank tournament. To begin it, go West from the B Rank Tournament Reception, to enter the cave. Go along the tunnel until you reach a crossroads (they lead North and South) - by it you will find Kisame and Itachi. Speak with them - after a short conversation you will learn, that you will have to fight with one of them.

Yup, only one of them - Itachi will be act as an observer, and Kisame will be the one fighting you and your allies (who you should be bringing with you for this encounter). Contrary to appearances, this fight will not be an easy one - this is probably the hardest combat you've had up to this point, at least among ally event. Kisame will be blocking most of your attacks (as well as jutsus) - using jutsus without engaging the enemy with your allies, or using it after substitution is completely useless, because 9 out of 10 cases the enemy will block or dodge it. You should focus on launching normal attacks (help yourself with your allies, who Kisame lacks) and launch your jutsus only when the enemy can't dodge them.

You should always keep at least 1-2 segments of substitution, because the enemy, contrary to appearances, is extremely fast during his attacks, doing large amount of damage in the process. If he catches you into his combo, use a substitution, get away from him, and when he stops his combo launch a counterattack. After defeating the enemy you will have a standard conversation, after which the event will end and you will receive: