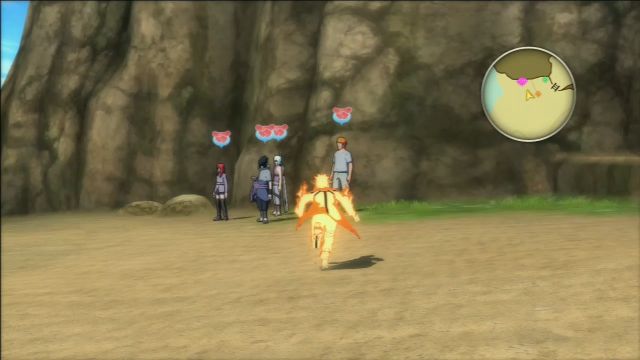 The last ally event available before the B rank tournament.

The last ally event available before the B rank tournament. To begin the quest, teleport to B Rank Tournament Reception (by using the Teleportation Ninja) and go all the way North, until you reach a mountain range (by the beach), where a group of four ninjas await you. Speak with whoever you want to and begin the event. After a short conversation you will have to fight three of them.

The fight wish Suigetsu (Karin and Jugo as his allies) is rather simple - the enemy specializes in close combat, his attacks are strong, but they are slow, meaning that you will have advantage over him with a mobile character, or one that fights from afar. The only problem is the collaboration of the trio - Suigetsu's allies will be entering the battlefield all the time to harass you, just like it was in the previous ally event.

After you've dealt with them, you will have to fight their "boss" - Sasuke. It's safe to say that Sasuke is one of the best characters in the game - he's doing good in close combat, he's fast and deals decent damage, while at the same time can be incredibly annoying from a long distance. This fight would be extremely hard if not for one thing - he is fighting alone, you can bring 2 allies with you. Use the advantage and make short work of him. Don't let him fill his True Awakening bar - if he manages to do so, the encounter will become much more difficult.

After finishing the second round the event will be finished. For completing the quest you will be given: