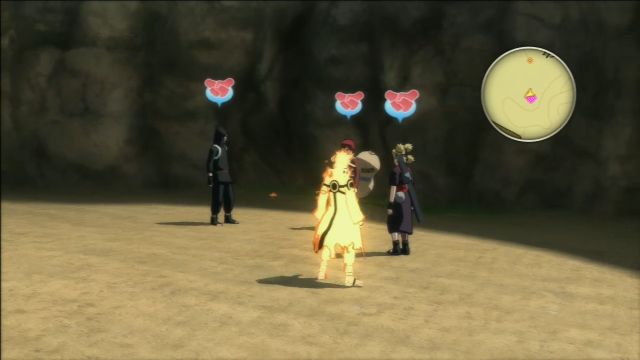 Another, rather easy ally event.

One of the ally events, which is available as soon as you've completed the C Rank ninja tournament. To begin the quest, teleport to B Rank Tournament Reception (by using the Teleportation Ninja), jump down and go North, until you reach a group of three ninjas (Gaara, Temari, Kankuro), standing by the wall. Speak with any of them to start the event.

This time you will only have to finish one fight. You will be fighting all three of them, but Gaara will be the "main" enemy. The whole encounter is very similar to the one with Fourth Kazekage (check the previous ally event) - they both attack using the sand, they are perfectly suited for long-ranged combat, and are very weak in close-quarters. Just like with the previous event, your main goal is to stick to the enemy and don't let him gain any distance. The only problem with the whole fight is that Gaara uses the help of his siblings a lot. What is even worse, they are doing their job unexpectedly good - Kankuro will harass you with his puppet, from afar, while Temari will knock you up in the air if you decide to get closer to Gaara. The enemy uses their help whenever he is able to, meaning that your allies will have their hands full as well.

After you've defeated them, you will have a short conversation and the event will be finished. You will receive: