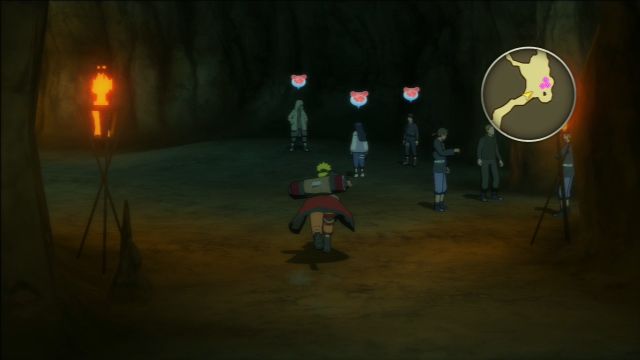 The place in which you can find the three ninjas.

The first ally event available to you after unlocking the C class tournament. To start it, after entering the cave, in which the C class tournament takes place (from the beach's side), go to the tunnel on the right side. In the midsection of the mentioned tunnel you will stumble upon a group of three ninjas - Hinata, Kiba and Shino. Initiate a conversation with either of them, and after a long discussion, you will have to face them in two, rather simple and easy encounters.

The three-man squad of your enemies will always be the same, it will only differ in the way of the 'main" fighter you will be directly fighting with. First, you will go against Kiba - he specializes in close-quarters combat, as well as has a companion pet, who will be his support during the fight (just like all the puppeteers use their puppets) and can take a hit of two for him. Kiba is one of the weakest enemies you will encounter in the game, mostly because of his low mobility. After you've dealt with him, you will be paired against Shino. This encounter is entirely different from the previous one, because this foe will use long-ranged attacks most of the time - you can't let him get away from you (unless you play a long-ranged specialist as well), as he will swarm you with his attacks. If you manage to keep up with him and attack him all the time, the fight should be soon over.

Contrary to your first thought, you won't have to fight for the third time, against Hinata as the team's captain - the event will be finished after those two rounds. You will be given the following rewards: