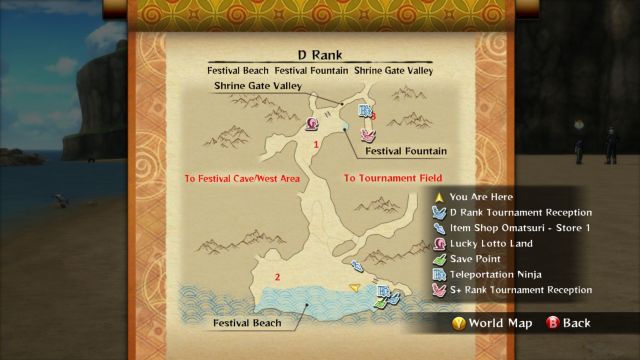 This ally event becomes available after finishing the class D preliminary round of the ninja tournament. To begin the quest, go to the Lottery point (point 1 on the screenshot at the beginning of this chapter), to stumble upon a group of four ninjas - begin the conversation with either of them. You will learn about a special training, that the trio of youngsters will be participating in.

After the conversation you will have to fight with the trio - Lee, Tenten and Neji. Lee is a fast combatant, specializing in close combat, although his attacks are rather weak. Another thing that simplifies this battle is the fact, that you can use up to two allies during this battle. After you've defeated the youngster, you will have to get to another place of their training (point 2 on the screenshot at the beginning of this chapter).

After a short conversation you will have to compete in an almost identical fight - although this time the group is led by Neji, who you will be fighting with. Yet again, your enemy specializes in melee combat, although he is far weaker than Lee, as he is a lot slower than your previous enemy. After your second victory you will have to get to the third training place (point 3 on the screenshot at the beginning of this chapter), where you will have to face the trio once more. 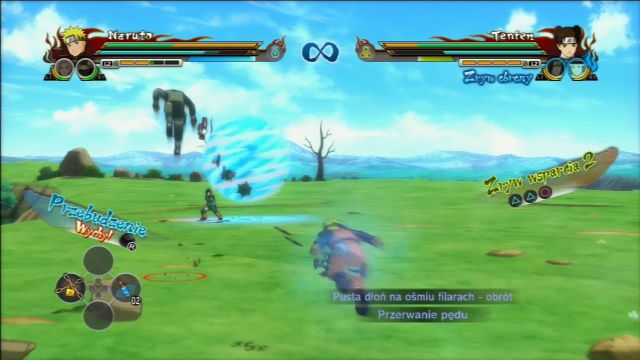 If you are using a character specializing in close combat, this encounter will be extremely irritating.

Things take a different turn this time - you will be fighting Tenten. She specializes in very long ranged combat, and she's extremely annoying - she will swarm you with a rain of projectiles, and when you will finally be able to get closer to her, she will use her allies as a shield, while simultaneously trying to gain distance from you again. The only thing you can do to make this fight easier is to just stick to her and deny her the opportunity to gain any distance at all - in melee range Tenten is one of the weakest characters in the game. If you are playing a character who can fight effectively at long distances, she won't be of any problem (but Neji, and especially Lee from previous rounds will turn out to be a pain).

After the fight you will need to go to your final destination (go back to point 2 on the screenshot at the beginning of this chapter), to take part in the final battle - not with the trio anymore, but with their teacher, Guy, himself. He's a formidable opponent, fighting almost only in melee range (except for his ultimate jutsu), but you will have a huge advantage over him - he will be fighting you alone, whereas you can bring up to two allies with you. Guy will be using his awakening from the very beginning, which will make his attacks faster and do more damage. Use your allies and the fight should soon be over.

Afterwards, after a short conversation, the event will be complete and you will be given the following rewards: