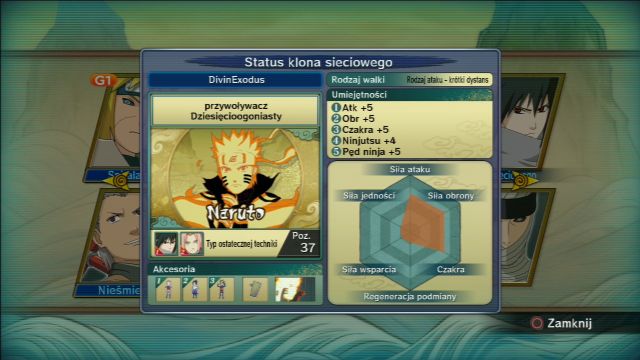 During the tournament, you will have to fight with Network Clones of other players.

This round changes one thing - you won't be fighting in 3-man squads anymore, as one fighter will be dropped out of it. Both the preliminary and main round take place in 2-man teams, and consist of two rounds - all the other rules are the same.

It's worth to mention the thing which was never mentioned. If you are connected to the Internet while you are playing in the tournament, there's a chance to have a Network Clone of other player as your enemy - it takes place of one of the computer-controlled teams. Those clones are steered by computer, as well, but they can be equipped with various cards, increasing their stats (like attack, defense, chakra regeneration, etc.). It brings some novelty in the rather boring ninja tournament fighting system.

Network Clones, are, paradoxically making the whole fight a lot easier - they are way weaker than their computer counterparts, and they attract the attention of other fighters (just like the computer enemies have been focusing you so far). It will allow you to win the rounds in which they appear a lot easier. Of course, you can also be paired against a very high-leveled group, which will kick your butt, but that's highly unlikely.

After finishing the preliminary round, you will be automatically enlisted in the final round. You can now either start it right away, or do some new Ally Events - "Memories Aboard a Paper Plane", "Argument of Art" and "Utakata Running Away".

The final round is a single fight - yes, instead of the typical 2-3-4 rounds, you will have to finish one round only. It's extremely easy, as you can just pick your strongest character and own everyone on the arena, without worrying about anything. After finishing this round you will be shown a series of cutscenes, after which you will be able to pick one reward:

Take the one suited for you the most and enjoy the end of Ninja World Tournament Rank A. You've unlocked the access to Rank S, as well as Rank A Challenges (which can be done near the Reception of the previous class - A). Go to the next chapter to continue.