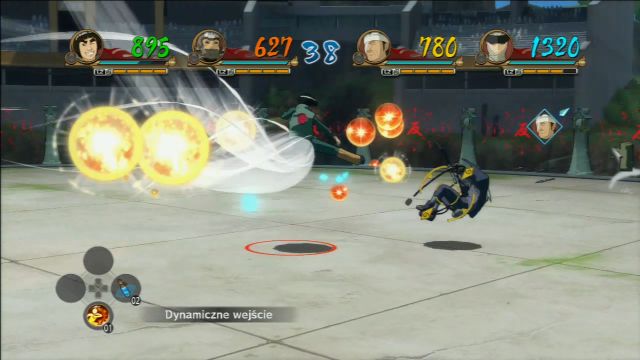 Each subsequent round will be more difficult.

The preliminary round of B rank will seem to be even more difficult than the qualifying round - there's some truth in it, as the enemies are even more deadly. A good solution for that is to select characters whose jutsu (or ultimate jutsu) allows them to attack from afar, by closing-in the distance (Naruto, Kakashi, Guy), instead of attacking the enemy from a long range, standing still while the attack travels. While standing still you are putting yourself to enemies' attacks, which will surely come - like in the last round, the enemies will focus you more than they do themselves.

Besides the ever-increasing difficulty level, this round is the same as the previous ones - you still have to collect Battle Orbs, but it will be more difficult to do so now. After finishing this round you will end the preliminary round and will be enlisted to the main round. You can now do a couple of things - you can either start the final round (speak with the NPC in B Rank Tournament Reception), use your money and buy more powerful ninja artifacts (which is, in fact, a good idea) or do one, freshly unlocked Ally Event - "Two Jinchuriki" - which description, as always, can be found in the "Ninja World Tournament - Ally Events".