To take part in the Rank C Ninja World Tournament, start the "Ninja World Tournament" from the main menu and select the option to continue the game. You will be asked to select your character again, after which you will land on the beach again. During the cutscene you will learn that you have gained access to another part of the island (Rank B), and that you've unlocked the access to Challenges. To take part in them, go back to C Rank Tournament Reception - a nearby window will now be hosting an NPC with a list of challenges.

Rank B of Ninja World Tournament will be unlocked after you've finished the previous rank - C. The gameplay is fairly the same - you still have to play a qualifying round, after which there's a preliminary and finally main round, after which you will complete the B Rank of the tournament and gain access to the next one (A) and further section of the island. 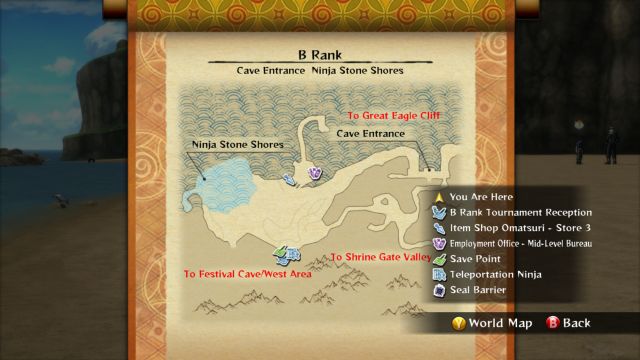 To start your adventure in this rank, you will have to get to the coast. There are two roads - you can run there on foot, or use the service of Teleportation Ninja. The second option is recommended, as there's nothing interesting along the way, and you will lose a lot of time going there on foot, as there's a few loading screens. Go to the Teleportation Ninja and select the option to move to B Rank Tournament Reception.

This location is rather large, but most of the things here take place close to each other, so you won't have to run long distances to do quests, like it was in the previous rank. Before you start the tournament, you can do a few things. After completing the previous rank, you've gained access to new group of Challenges - they can be found in a NPC window near C Rank Tournament Reception. There's a group of new tasks in the Employment Office as well. And there's the main dish - you can take part in three Ally Events, even before entering the tournament. Those are: "Members of Taka", "Greatest of the Three Sands" and "What is the Value?". If you want to complete them, go to the "Ninja World Tournament - Ally Events" chapter.

After you've done everything you wanted, speak with the NPC in the B Rank Tournament Reception to start the tournament.