Approach the NPC in C Rank Tournament Reception again to take part in the preliminary round. Just as it was before, you will have make your way through three rounds, in which you have to collect the more Battle Orbs than your enemies. This round will introduce a new - and at the same time extremely important - mechanic. 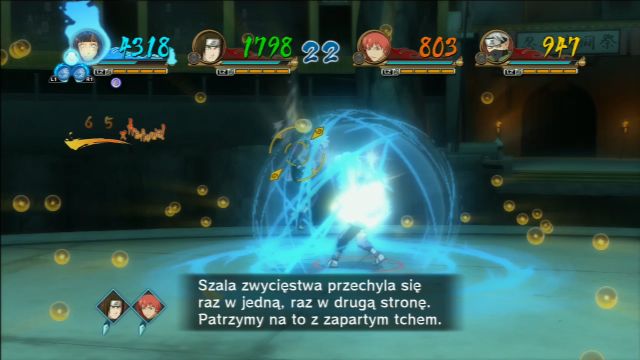 True Awakening and Ultimate Jutsu orbs give gigantic advantage over the enemy.

From time to time, one of two special Orbs will appear on the arena - True Awakening orb or Ultimate Jutsu orb. As you've probably already guessed, they give access to one of the two mechanics which are normally blocked during the ninja tournament - ultimate jutsu and true awakening. It goes without saying how important it is to get one of those in your own hands - they give huge advantage over your enemies. The Ultimate Jutsu will drop a mass of Battle Orbs from the enemy (1,000), but allows for a single attack only, while True Awakening will make your character stronger, faster, and alter your attacks.

Besides this, the whole encounter is the same as always. After defeating your foes, you will be enlisted to the main round of the C rank of ninja tournament, and you will be able to do two additional Ally Events - "Crossed with Money" and "Bee's Ordeal". If you are interested, go to the "Ninja World Tournament - Ally Events" chapter to find detailed information about them. It's worth to visit local stores, where you should find some new, useful items.