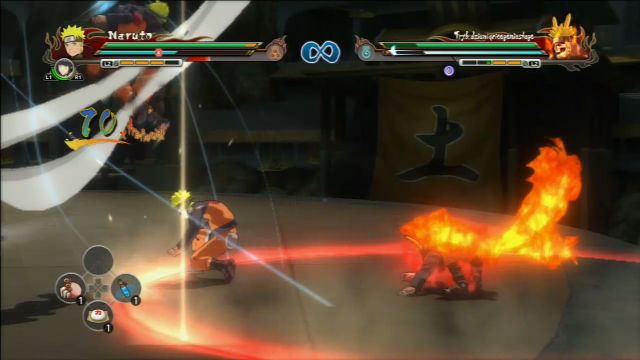 Jump out of the red circle when it appears on the ground.

The first round with the nine-tails mode is fairly simple - if you've ever used the True Awakening of Naruto, you should be familiar with what's ahead of you. The enemy moves a lot faster than in his 'regular" Mecha-Naruto form, and his attacks have a longer reach. Fortunately, he has one major flaw - despite his quick movement, his attacks are sluggish and are easy to avoid with your substitution, or you can even block them, meaning that you can easily avoid taking any damage at all. Take advantage of the fact that you are accompanied by Hinata and call her whenever you've used up your substitutions, and the enemy catches you in his combo. Remember to avoid his area of effect attacks - a red circle will appear on the ground, and after a few seconds the area will explode. You just have to jump out of the circle to avoid taking any damage. After winning this fight...

The enemy has once more transformed, and the most annoying battle in the game now awaits you. The enemy is much larger than before, and with that he has a few new tricks up his sleeve:

There are two novelties during this fight - besides Hinata, you will also have Mecha-Naruto to help you out. The second one is your own character - Naruto will be fighting in his Kurama-mode, changing the array of his attacks and jutsus (unfortunately, you won't have access to your Ultimate Jutsu, as you are playing a character in True Awakening). You must try to dodge the enemy attacks at all costs - if he starts waving his claws, jump to a safe distance to avoid wasting your substitutions. Launch your own attacks in between the enemy's and use your jutsu only in two cases - when your companions are keeping the enemy busy, or by incorporating it into your combo. Afterwards a long series of cutscenes will initiate, after which this section of ninja tournament will be finished.