It's still not over yet with your mechanical Naruto alter-ego. It seems that the enemy has "transformed" and fled the arena. During the conversation in the Hokage Mansion, you will learn that the ninjas from other villages have been given an order to finish him off, but Naruto, as always, won't sit around patiently and decides to save his new companion. After the conversation ends, run straight to the village gate, where Hinata awaits your arrival - speak with her and you will be transferred to the area of Rank D ninja tournament.

You can use the services of the merchant, who can be found directly in front of your landing location - after the last few bouts he should have some interesting items. If you open the world map, you will notice, that the whole tournament area is unlocked - unfortunately, you won't be able to enter anything besides the area you are currently in. To continue, you have to head North, until you reach a blockade formed by a pile of corpses -turn to the East, into a narrow passage, and a cutscene will intimate. 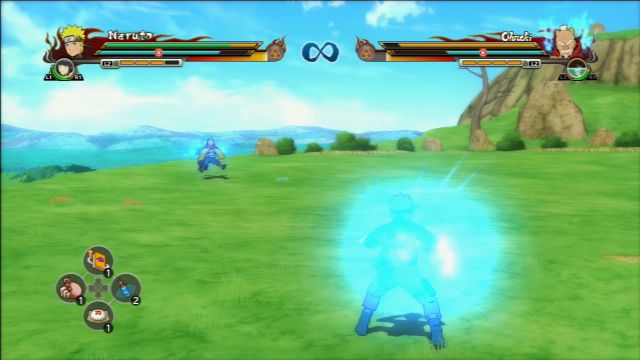 Getting near Mecha-Naruto won't be so easy as you would want to - you will be encountered by man ninjas while doing so, whose purpose is to stop you. One of them is a Darui and Shi. Fighting them is trivial, especially because you will have Hinata to help you out. The girl is extremely effective in close range - use her when you have caught the enemy with your combo (to make more damage), or when the enemy closes in on you to attack. Darui is a melee fighter, so you should have no problems to get rid of him and Shi. After you've defeated the duo, continue your journey to the North - ignore the passageway on the left and the stairs on the right side, as you can't go through there anyway.

In the narrow passageway you will stumble upon two Kages - Ohnoki and Mei. The levitating midget deals a lot of damage with his attacks, but he is extremely sluggish, meaning that you should have no problem to avoid his attacks. The enemy uses long-raged attacks (tossing rocks at you), so try to be on the move as much as you can, and close the distance on the enemy - if you let him get away from you, you can lose a lot of health. After the fight is finished, you can scan around the local hills (climbing up the ladders to get there) to collect some ninja artifacts and money. Afterwards, go North. 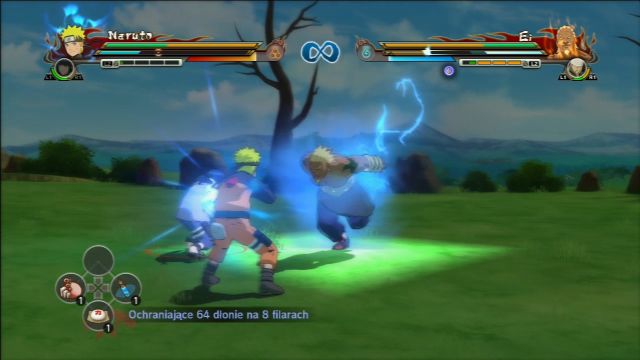 One of the most dangerous close-ranged enemies in the game.

You will have fight another pair of enemies - Ei and Mifune. This is one of the most difficult fights so far - Raikage is one of the most dangerous and effective melee-ranged fighters in the game. The enemy moves are quick and he does a lot of damage - this effect is only amplified when he uses his awakening. If you see a characteristic lightning aura around the enemy, you should be extra careful and take advantage of your substitutions, because Ei can quickly drain your whole health bar. The best way is to simply stay away from him until the enemy uses up his whole chakra and the awakening effect is over.

After you've defeated the enemy, continue your march through a narrow passageway. You should soon stumble upon a save point and a merchant. By all means save the game, use the merchant if you want to and continue marching to the South, where a couple of injured ninjas can be found, to initiate a scene, after you will meet will your target.