During the conversation, a series of animated cutscenes will initiate, after which you will learn that you will be taking part in the qualifying round of the ninja tournament. You will be fighting in a 3-man squad, but this time you won't be able to select its squad on your own, as it will be forced upon you. Your team will consist of Naruto, Hinata and Mecha-Naruto. The rules are fairly simple and similar to previous rank of the tournament - the whole battle is divided into three rounds, during which you will be fighting with three other enemies. Select one fighter for each round and prepare for the encounter. I would strongly suggest to select Mecha-Naruto as your first character, as fighting with him is somewhat specific. 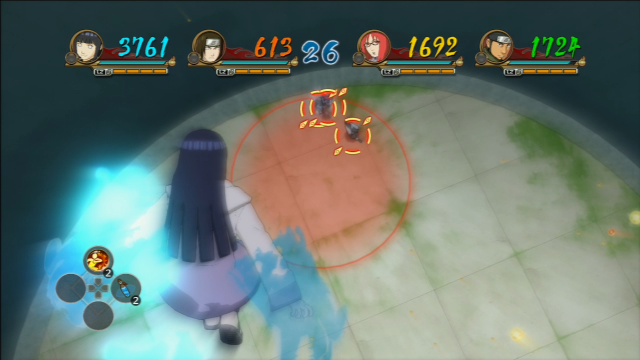 An action on a vertical railing...

A first novelty awaits you - traps on the arena. They are generated randomly on the terrain and each character to stumble upon them will initiate a specific effect - dealing damage, knocking down, etc. You don't have to pay much attention to them, as they don't deal any real damage, and it's rather hard to fall into them. The second novelty are rail actions. Those are places on the outskirts of the arena, which offer an interesting maneuver - all you have to do is to get close to them and press the button indicated on the screen. 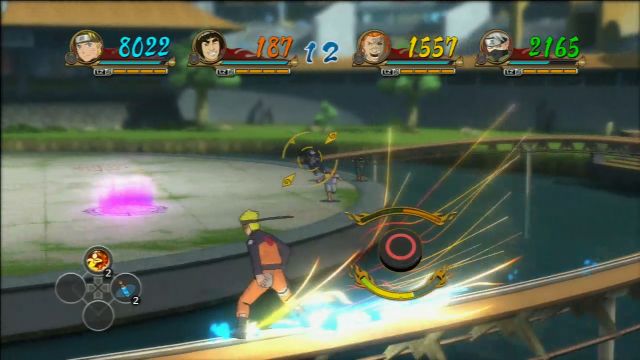 ... and on a horizontal one. Use them as often as you can!

Those actions are divided into two groups - vertical and horizontal. The first type offers you the ability to jump high into the air - afterwards, you will have a couple of second to select your place of landing. Next, your character will smash into the ground, in the indicated place, dealing damage to every foe in the range of the red circle. The horizontal rails require a little bit of "powering up" - after jumping on them, you will have to mash the attack button as fast as possible, to prepare the attack. If you managed to fill the bar, your character will jump out of the rail and attack a target (the one you have focus on), dealing quite some damage. Both of those actions allow you to have some breathing space when things went south, as well as are a great source of tons of Battle Orbs. You should use them as often as you can. Remember that the rail will vanish after you've used it (after several seconds a new one will appear) and that the computer controlled characters can use them as well. 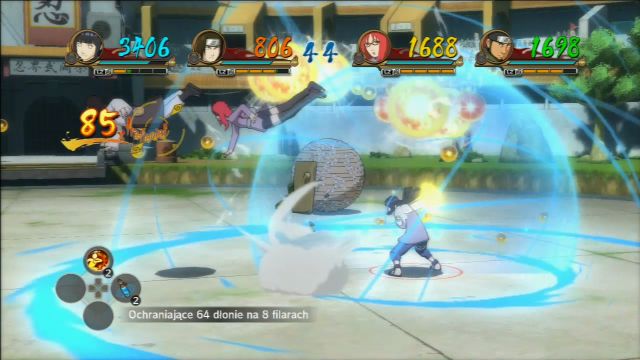 Hinata's Jutsu allow you to attack multiple foes at once, dropping, literally, a sea of Battle Orbs.

If you've selected Mecha-Naruto as your first character, you will notice that his fighting style is rather specific - he is sluggish and has short reach with his attacks, but they can deal some serious damage. You should focus on spamming his Jutsu (Ultimate Jutsu is locked) - it's activated almost instantaneously, and Mecha-Naruto will quickly move a long distance to his target and deal damage. Just like in any other round, locate the most dangerous foe (a long-ranged ninja, for instance) and take him out in the first place.

The rest of the rounds shouldn't be of any challenge - especially when you are playing Hinata. She is a perfect melee combatant, and her Jutsu can hit multiple foes, dropping insane amounts of Battle Orbs (if you manage to hit all 3 of them, you will gain almost 1,000 of them at once!). Just like before, any Battle Orbs you earn will be transferred to the next round and the one who manages to collect the highest amount is the victor. After the fight a series of cutscenes await you, after which you will be given a new task - to go to the training area. To get there, run through the village gate (to the South) and go along the pathway until you initiate a cutscene. Go to the next chapter to continue.