After you've completed the qualifying round, you will be informed, that the next step differs slightly from the previously finished one. The difference is, that you will now be fighting as a team - at the very beginning it will be a 2-man squad, increasing up to 5 people as the ranks go higher. It means, that you will need to find yourself a partner, who will accompany you in this part of the tournament.

There are two options here - you can either choose from the characters which are available since the beginning of the tournament, or do some of the side quests, called Ally Event, to gain the trust of ninjas you will be doing the quest for, thus allowing you to select them as partners during the ninja tournament. There's only a few characters available at the very beginning, which means, that completing various Ally Events becomes rather mandatory, if you want to create a specific team. Most of those quests are fairly easy, so it's worth to do them - the description of each and every Ally Event can be found in the "Ninja World Tournament - Ally Events" chapter.

If you want to unlock new allies, go to the Festival Beach, where you will find two ninjas, talking with each other. Start a conversation with them, to start the event itself - go to "5 Difficult Question" in "Ninja World Tournament - Ally Events" for more detailed information.

Regardless of whether you've completed the side quest or not, go to the NPC in charge of registration (D Rank Tournament Reception) and confirm your readiness to take part in the preliminary round. You will now have to select your ally, with which you will be fighting in the preliminary round. The choice is, obviously, irrelevant, as you can pick anyone you want, but I would strongly suggest to pick characters you are familiar with, because, contrary to your first thought, that character won't be controlled by a computer player, but by you yourself. 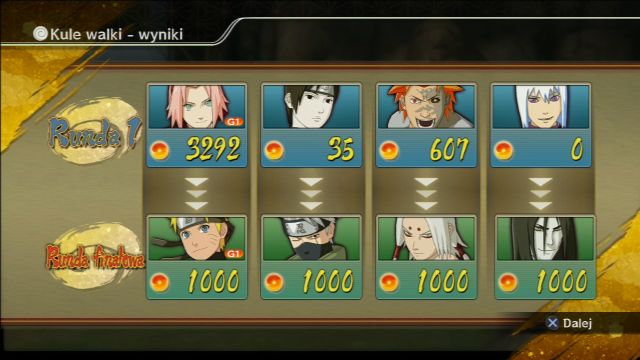 The whole preliminary round is divided into two parts - in both of them you will be fighting with only one of your characters, and that is precisely why it is so important to take a character you are familiar with. The fight itself is the same as in the previous round - you will again have a pool of Battle Orbs, and you have to steal them from your enemies, collecting those which are dropped from your foes. The only difference is that the orbs you managed to collect in the first round will be transferred to the next one, and they are added to those your character start in the second round. For instance, you've won the first round and you've managed to collect a total of 2,500 Battle Orbs - you will start the second round with 3,500 Battle Orbs (2,500 from the first round, and 1,000 from the second). To win the preliminary round, you have to finish the second round with the highest amount of Battle Orbs.

After finishing the preliminary round, new items will be added to the shop (it's worth to check them out, as there should be more powerful versions of the ones you're currently using), and you will be automatically enlisted in the Main Round of D Rank. Go to the next chapter to continue.