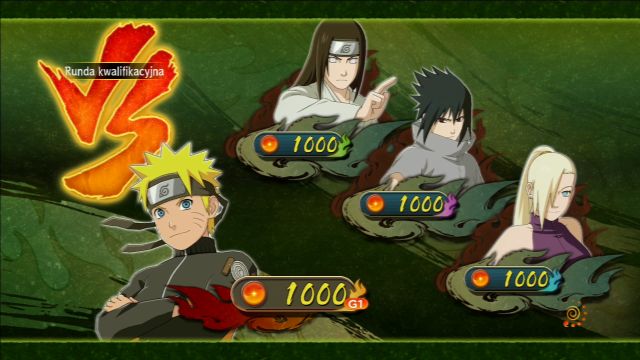 You will be fighting in a Free for All mode, with 3 different enemies.

After you've completed exploring the island, go back to the D Rank Tournament Reception, speak with the NPC again, which will start the qualifying round. After a series of cutscenes you will be transferred to the battleground, where a significantly differing combat type awaits you.

First things first, you will be fighting with 3 different foes at the same time, in Free for All mode. The second novelty is the fact, that you won't have your typical health bar here. Instead, every contestant gets 1,000 battle orbs. After each hit delivered to the enemy (or when the opponent hits you), he will drop a certain amount of orbs - the more damage was done (with a full combo, for instance), the more orbs will be dropped. The orbs squeezed out of your enemies (or the ones you dropped) should be picked up as soon as possible, as they are added to your supply. 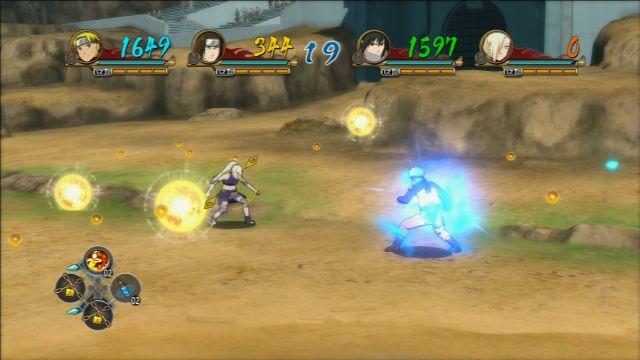 Collect Battle Orbs and bring the enemy supply of it to 0 to drop him/her out of the arena!

After the amount of enemy's (or yours) battle orbs goes to 0, the target will be briefly stunned - if it is attacked during this period, he/she will be dropped out of the arena and excluded from the rest of the round. Your goal is to finish the encounter (by dropping out every enemy out of the arena, or after a certain amount of time has passed) with the highest amount of Battle Orbs. Try to collect as much of them as possible, as you will be rewarded with more money and a higher battle rank for doing so.

During the encounter you should focus on two things - you should isolate one of the enemies, which will allow you to attack him without anyone else intervening. The second 'rule' is to select a proper target - at the very beginning, you will have to decide, which target is the most dangerous (or most annoying) one (for instance, a long-ranged character when you are playing with a slow-moving, melee fighter) and try to eliminate him/her as fast as possible, to make the whole encounter a lot easier, as there's nothing more annoying as an enemy who swarms you with rain of attacks, from the other side of the arena.

After completing the qualifying round you will be enlisted to the preliminary round. New items will be available at the shop as well. Go to the next chapter to continue.