Ninja World Tournament is the longest, most complex game mode in the game - your task is to get through different ranks of the tournament (D, C, B, A, S and S+), which will pose an increasing challenge to you. The actual gameplay begins just as you land on the shore - you will now have to select the character you will play during the tournament with. Remember, that the choice is permanent (at least for most ranks) - if you decide to change your character, you will have to start a given rank from the beginning. 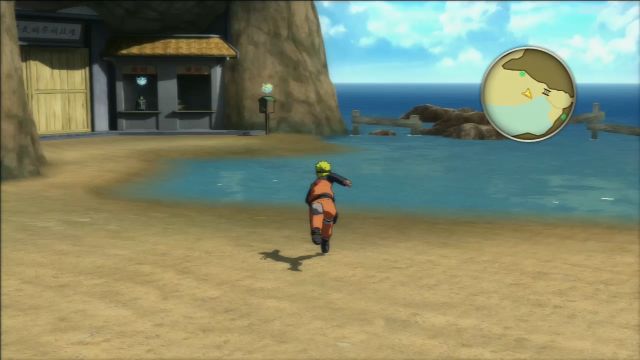 The place in which you can register for the tournament.

After selecting your hero of choice, you will be informed to go to the East, from your starting location, to register in the ninja tournament. Next to the registration window, there's a save point, looking like a bird feeder, or a pigeon stand - the game is saved automatically in key moments (after a fight, or after you've completed a side quest, for instance), but, as always, it's still better to save it yourself, whenever you have the chance to do so, so that you will be certain that you won't lose any game progress when something goes wrong.

Save your game and speak with the NPC at the D Rank Tournament Reception. You will be informed, that you first have to finish a preliminary round, before you will have a chance to fight in the actual tournament. You now have some spare time to explore the island - if you want to continue and take part in the preliminary round, speak with the NPC again and skip the next chapter of this guide and go straight to "Qualifying Round".

If you, however, want to explore the island first, go to the next chapter.