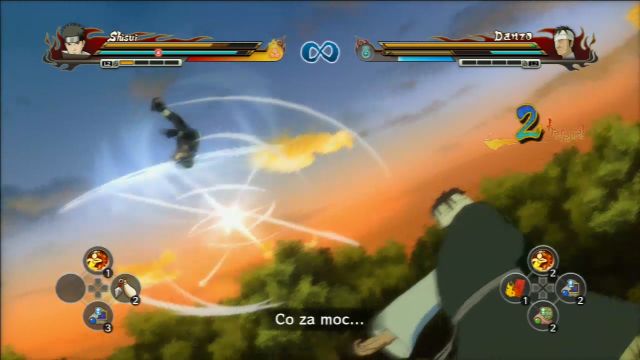 The enemy will surely overdose his throw attack.

This encounter is very similar to the previous one - in this case your enemy, Danzo, will be trying to fight you in close-range combat (just as Itachi did), but he's a little more effective than your previous enemy. First of all, you have to watch out for his throw attack, which the enemy will surely use over and over again - if you are close to the enemy, try to attack him all the time to prevent him from using this maneuver (do not stand in one place and refrain from blocking, as throws cannot be blocked).

Another thing you must be aware of are his attack combinations - he performs a series of powerful, but very slow attacks, which are quite easy to dodge, especially when you have your substitution available. Don't let the enemy catch you off guard (when you can't use your substitution technique), because you will surely receive some damage - if you decide to block you will be thrown, and if you won't block you will be hit multiple times by his combo.

Danzo is a lot slower than Shisui and you should abuse this as much as you can, constantly bombarding the enemy with your swift attacks. You can use your Ultimate Jutsu when the enemy tries to close the distance on you, to lure him into your trap.

This fight with Danzo finishes the Ninja Escapades - the next one, "The Far Reaches of Hope" is a series of cutscenes, during which you won't have to fight anyone else anymore. Relax, sit back and enjoy the show.