This page contains a walkthrough of the Belly of the Beast main mission, in which you will attempt to escape from Gecko Station. Here you will find information on the location of treasure chests and hints on how to defeat a boss called Geegler President.

Basic information on the task

Belly of the Beast is an exploration mission different from other main quests. For this reason, there are some important rules to keep in mind: 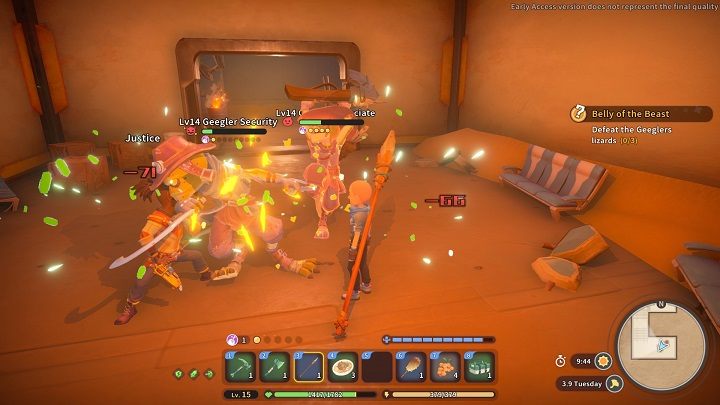 As soon as you enter Gecko Station, grab your weapon immediately and defeat three opponents. In a narrow room, it's a good idea to use an area weapon such as a spear to attack multiple enemies at once. Regardless, opponents are very weak and will fall after a few attacks dealt with by any weapon. 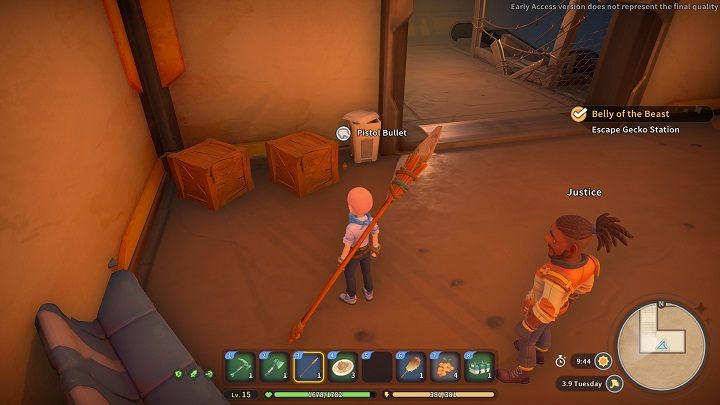 Collect the ammo in the room and move forward. 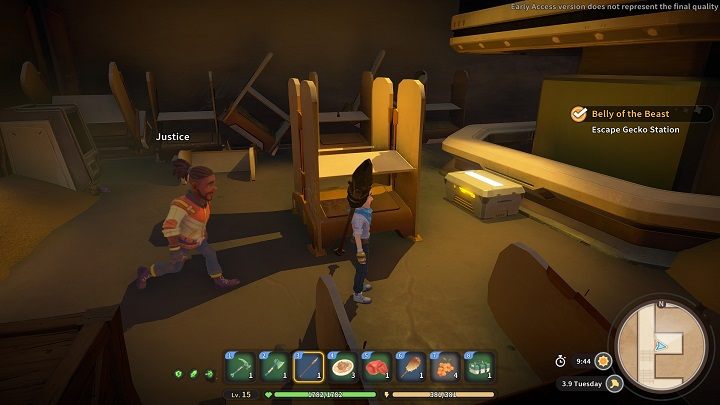 Turn right to the first room and open the chest located in the middle of the room, just in front of the counter. 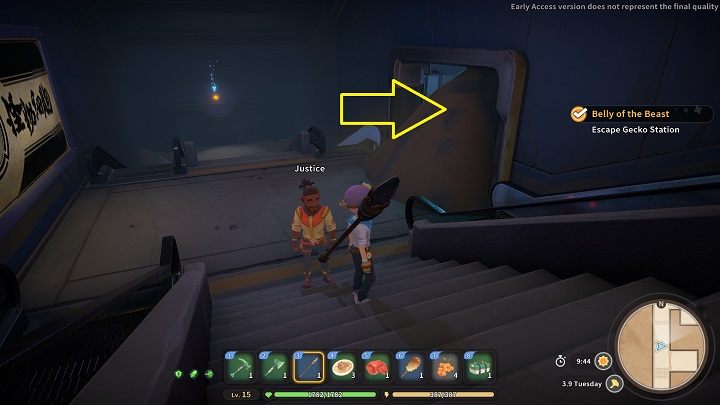 Go down the stairs. When you reach the heap of sand shown in the picture above, equip Pickhammer and dig through the pile. In the hidden room, you will find several ammo pieces for the gun. Go back and run down to the very bottom.

Use your gun to open the door 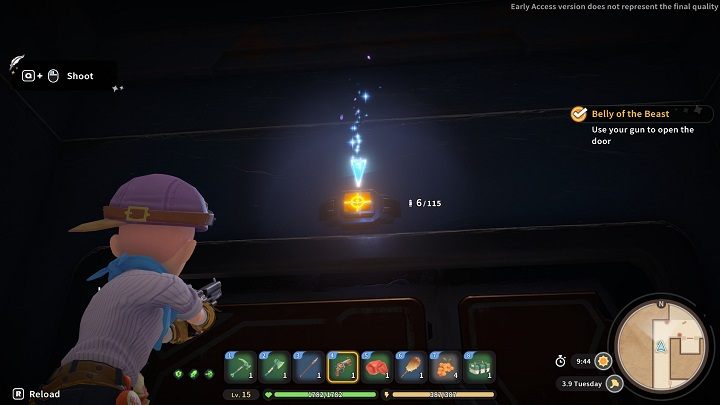 At this point Justice will hand you a gun. Equip it and enter aiming mode with the Q key. Aim at the yellow point above the door to open it. 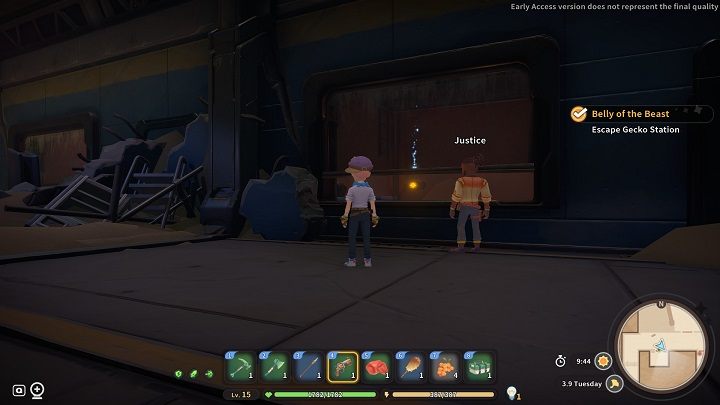 Walk through the door. You will notice another switch on the right. Shoot it through the crack in the glass, and the door to the room will open. 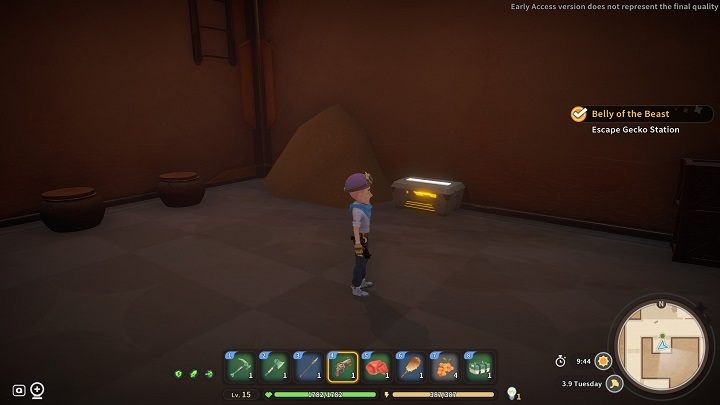 Inside you will find another treasure chest. Take its contents and return to the main hallway. 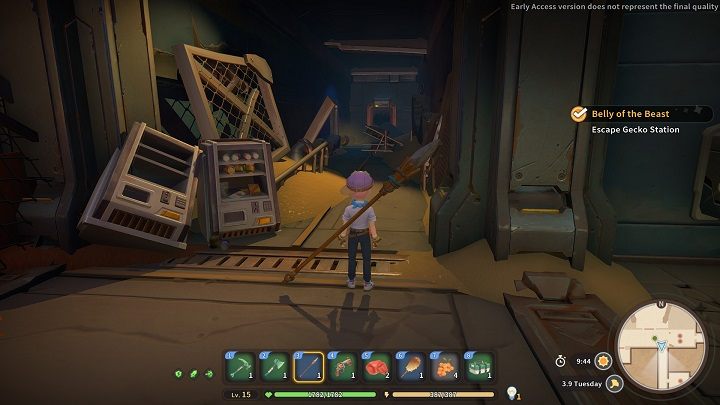 To open the next door, you will need a keycard. Remember this place because you will be back here in a moment.

Head right through a narrow passage stocked with junk and sand. Turn left twice until you reach the room with the Geeglers. 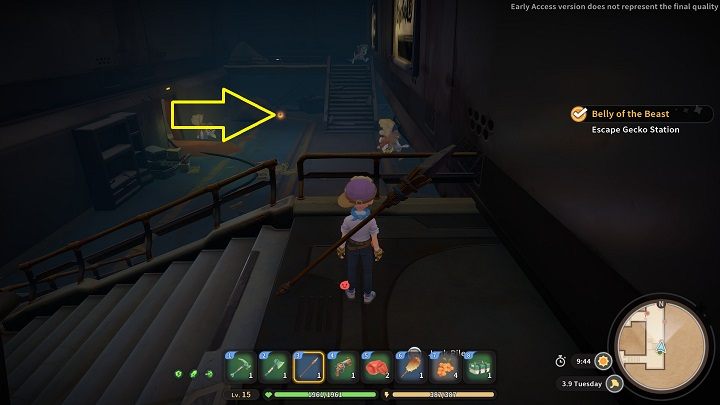 Defeat the enemies and pick up the keycard shown in the picture above. 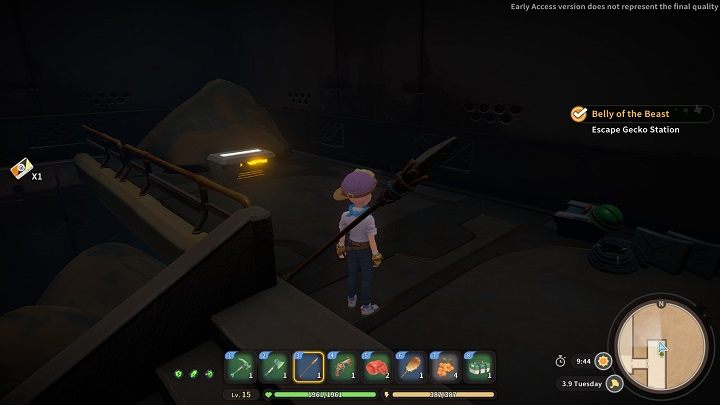 When you go up the stairs, you will find a treasure chest containing 2 Power Stones. 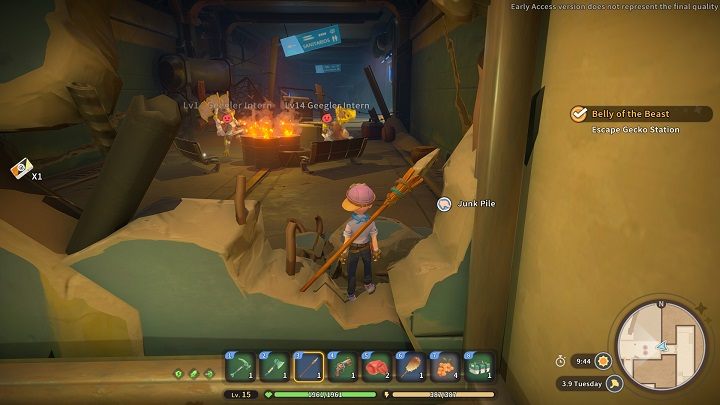 Head for the exit covered by sand and jump up. Defeat the two enemies lurking by the burning barrels. 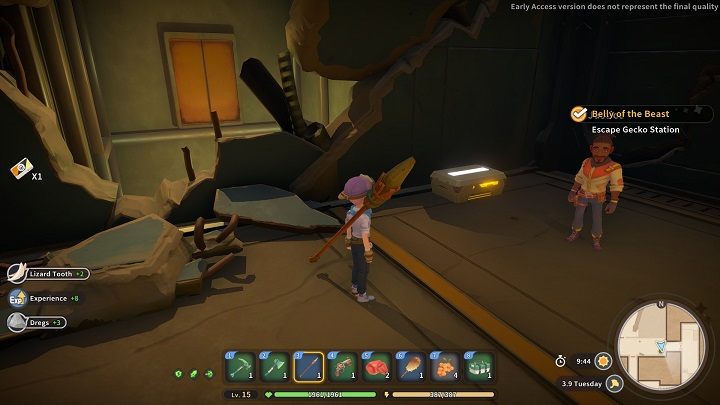 To the right of the hole in the wall you went through, you will find Opal hidden in a treasure chest. 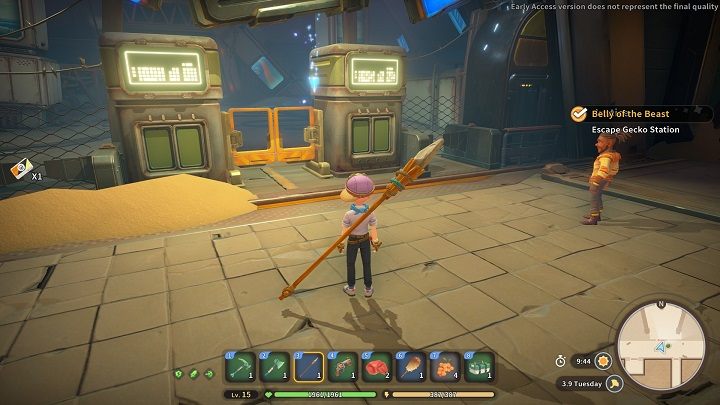 Keep going forward until you return to the locked gate. Use the keycard and then go the unlocked path. 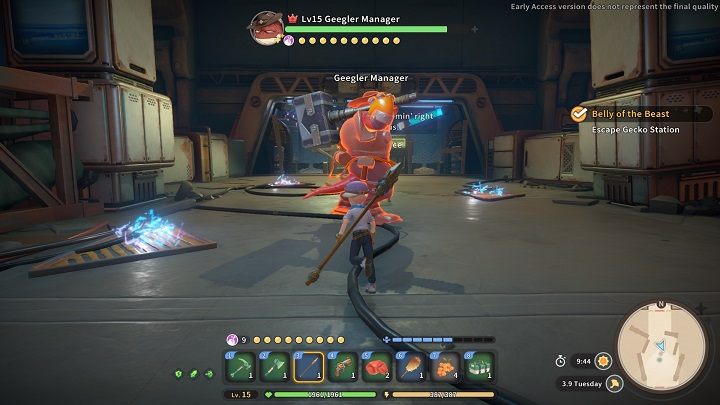 Now it's the time to fight the first major opponent. Geegler Manager is not particularly demanding. The easiest way to defeat it is to provoke him to attack Justice. While the companion is taking all the damage, you can use the gun to deal significant damage.

You can also use electric traps on the floor. Stand in front of the trap and Geegler, and when he angrily dashes towards you, he will be paralyzed and lose a large part of his health bar. 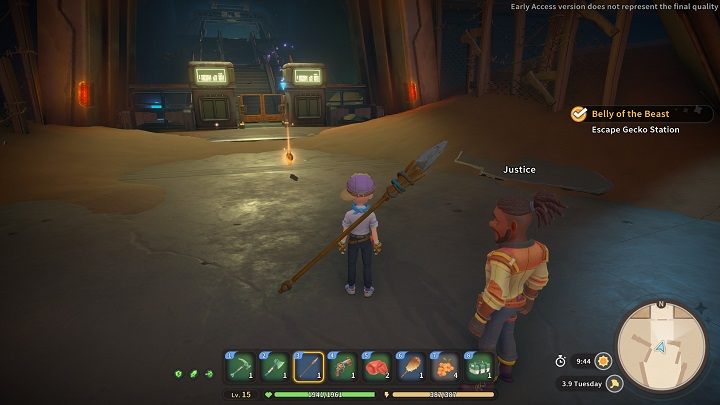 After the fight, pick up another keycard, unlock the door, use the healing point and run up the stairs to the upper floor.

To move on, you have to find two keys. They are on opposite sides of the room - we marked their location in the picture above. Red dots on the map indicate enemies to defeat. Their numbers may seem large, but they are very weak, and on top of that, they attack in small groups. 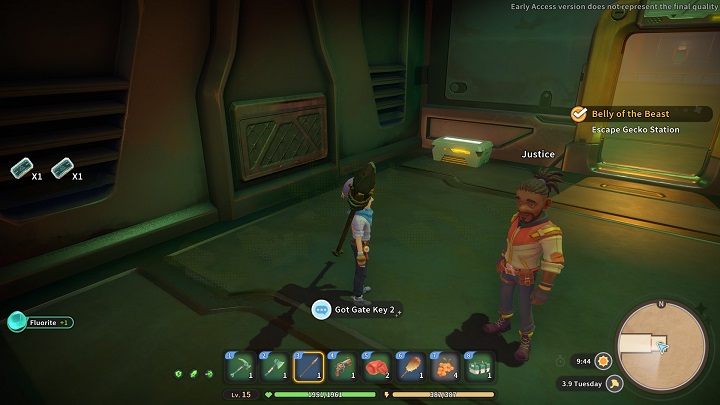 In the room with the second key, you will also find a chest containing 2 Power Circuits, while near the south wall of the corridor, you will find another chest - this time with Condensed Power Stones. 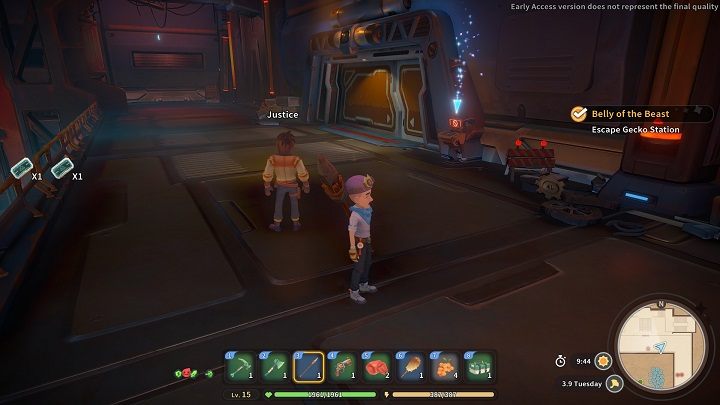 Head to the main gate in the northern part of the map and use both keys to open it. 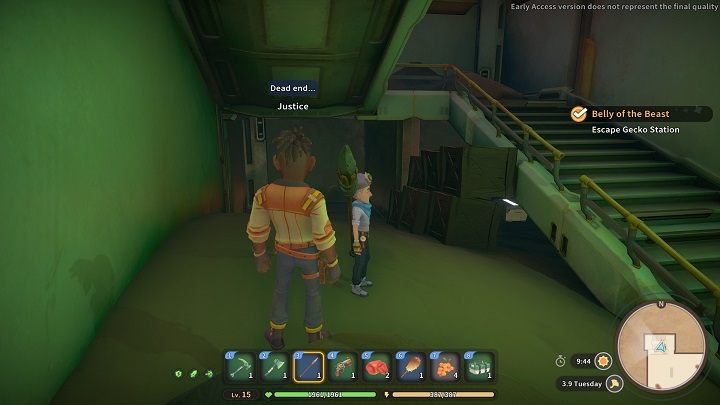 Run down, smash the crates by the stairs, and you will find a hidden Fluorite. Return to the upper floor and go through the door. 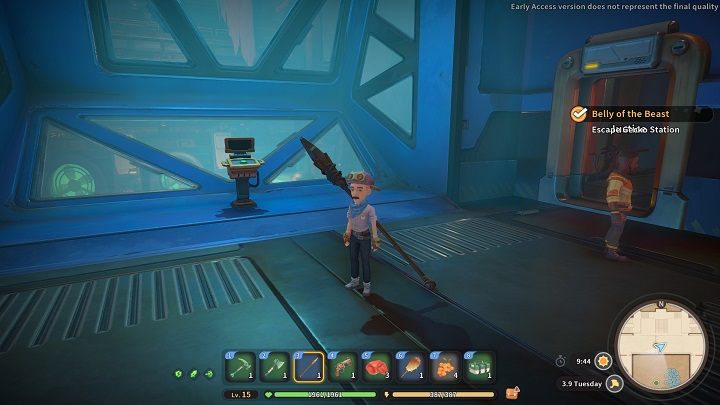 Go to the room on the left of the entrance, defeat the enemy and press the button to unlock the passage on the west side of the map. 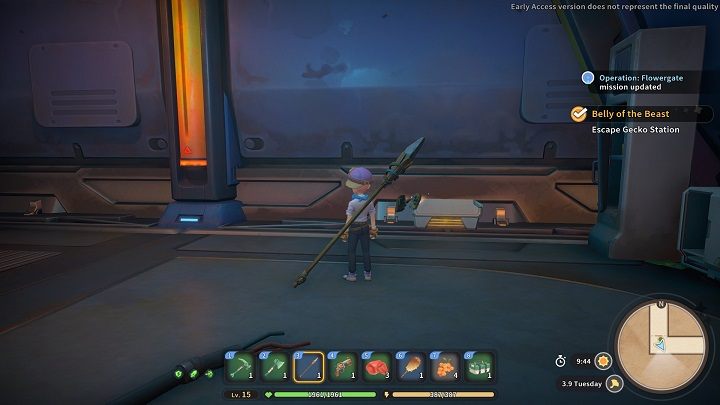 You will find a chest with ammo for your gun at the end of the unlocked corridor. 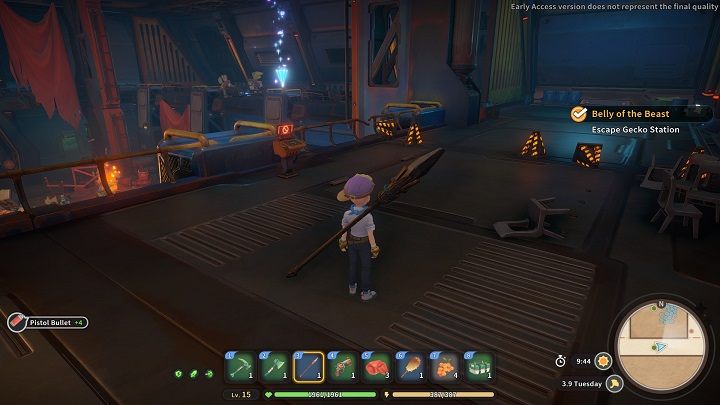 There is another button in the middle of the south corridor. Press it to open the eastern passage. 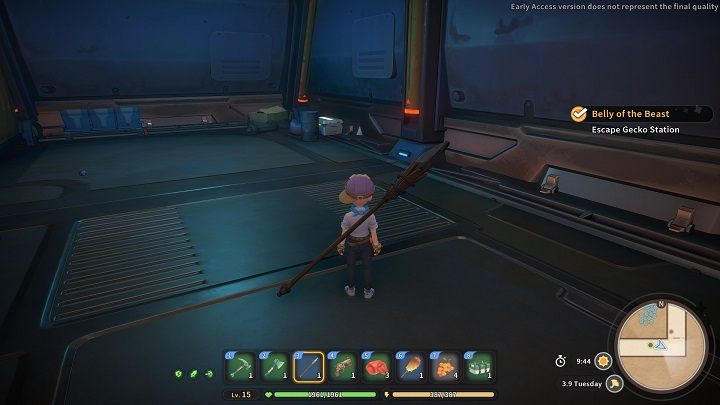 But first, take 3 Data Discs from the chest hidden behind the barrels on the wall next to you. 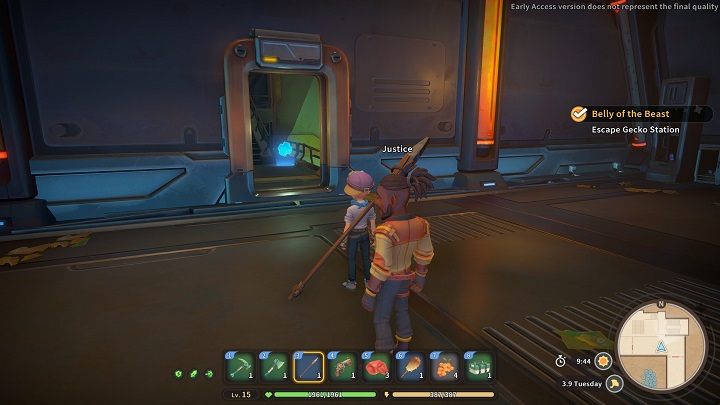 Continue going north until you reach a door with a healing point behind it. Use it and run downstairs. When you approach the passage, a cutscene will display. 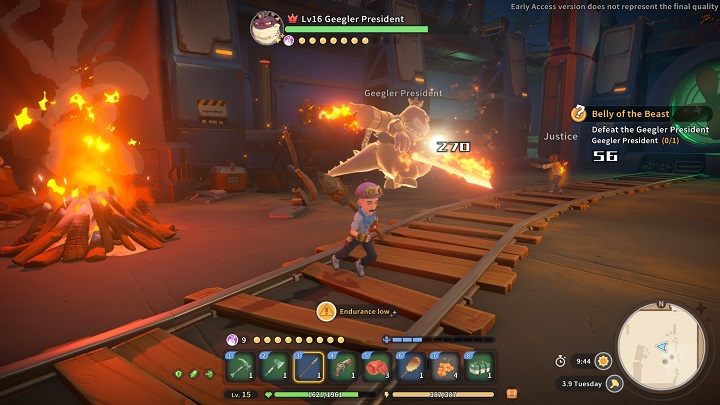 The time has come for the final boss fight. Geegler President, despite its size, is fast and has a high defense. His attacks include sword strikes, fiery gusts, and charges in flames.

First of all, the most significant thing is dodging. Each Geegler President attack is indicated by the red light emitting from the enemy. This is a clear sign to make the roll as quickly as possible.

The easiest way to do this is to continuously fire while the enemy focuses his attacks on Justice. When Geegler targets you, simply run to the other end of the map, and he will again turn towards your companion.

If you have to fight in close combat, it's a good idea to use daggers or a spear to reduce the shield and then use the Greatsword to deal direct damage. If that's the case, consider the enemy's speed - he may knock you down while charging and interrupt your attack.

After defeating the Geegler President, watch the cutscene.

This part of the quest will start automatically and it is a cutscene in which the Civil Corps reports back to Matilda on the mission. This marks the end of the quest.