On this page of the guide to My Summer Car, you will find information about Jonnez ES minibike. You will learn where to find and start it, and learn what is the RES switch for. You will learn how to use Jonnez ES to its full potential and what to do in the case when the minibike suddenly disappears. 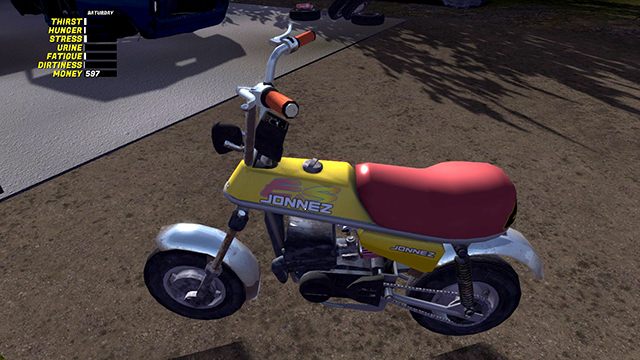 Small, but crazy. Jonnez ES is our "pocket" vehicle in My Summer Car.

Jonnez ES is a moped, or rather a motorbike, and is available right from the beginning. Its appearance is based on a real Suzuki PV50. You will find it leaning on the garage's wall near your home, with a full tank and ready to use. Jonnez doesn't have great load capacity, so it is difficult to use it for the first trip to the store - you can, however, drive it while holding one package, for example, a bag with food. 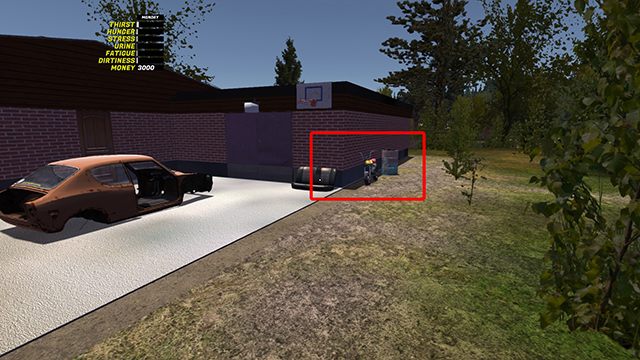 This is where you find Jonnez ES after running the game for the first time.

Jonnez ES is useful for short trips, for example, to the grandmother or as a spare vehicle. This is the only car that you can pick up as an object and place whenever you want. You can pack it in the trunk of a van, estate car or throw it into the boat. If your main vehicle runs out of fuel, Jonnez can save you from spending a night in the woods. Jonnez is very useful if you decide to make your first trip to the shop using a boat. Thanks to it, you will be able to load your goods into the boat much faster.

To refuel the minibike, you need a canister with two stroke fuel which can be found in the store in the town. 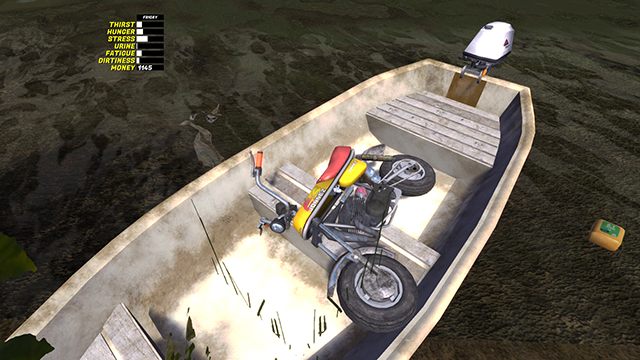 Jonnez ES is always useful as an extra vehicle for situations where your main vehicle can't reach a specific place or when it breaks.

How to start Jonnez ES? 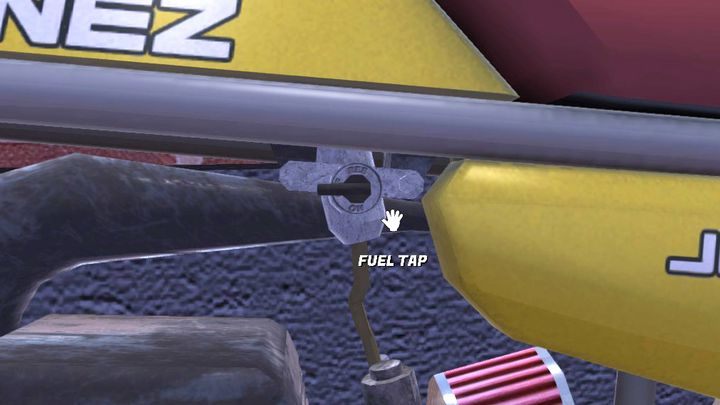 To start the engine, turn the handle to the ON position. 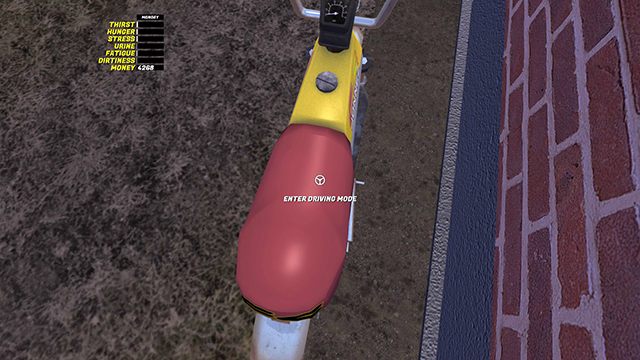 Approach it from behind to see the option to switch to driving mode.

Then, add gas (W) and press the G button to shift to the 1st gear. Don't switch the gear when the minibike is idling. Also, don't start adding gas after you switched the gear or the engine will turn off. After several attempts, you will understand how this works. If you can run-up, keep switching the gears with the G key until you hit the 4th gear. If you are driving slowly or up a hill, reduce the gear by pressing B. The LIGHTS switch is on the left, o left, on the lever. 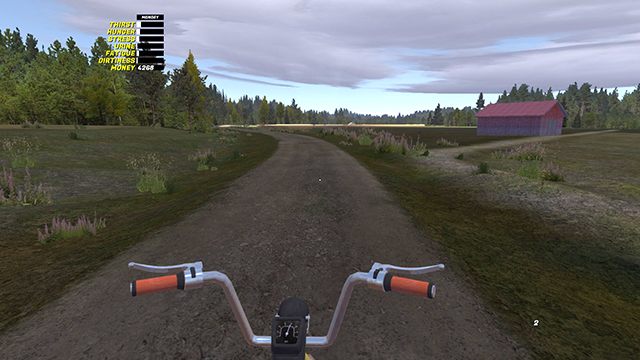 After that, the last thing you have to do is to feel the wind...

After stopping, turn off the engine by pressing the ENGINE SHUT OFF button to the right of the steering wheel. Press ENTER to exit drive mode and get off the vehicle. If you don't intend to use Jonnez for a long time after stopping, turn the fuel lever back to the OFF position - otherwise, the fuel will leak out. The RES position means a small fuel supply. When the engine chokes due to a lack of fuel, turn the lever to RES to reach the destination urgently. Don't drive in this mode under normal conditions. 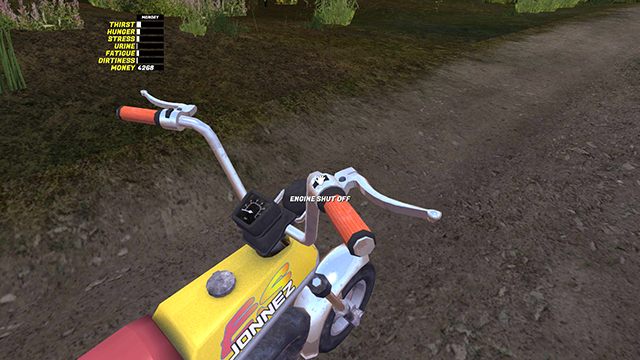 The small button on the steering wheel turns off the engine.

How to add fuel in Jonnez ES?

Jonnez ES uses two stroke fuel which can't be purchased at the gas station. It is available in tanks in the store and is called TWO STROKE FUEL. After purchase, unscrew the tank cover just below the speedometer. Grab the canister from the bottom and use the mouse wheel to turn it upside down. If you rotate it above the tank, you will see a white bar at the bottom slowly filling up to the end - Jonnez's fuel tank is now full. 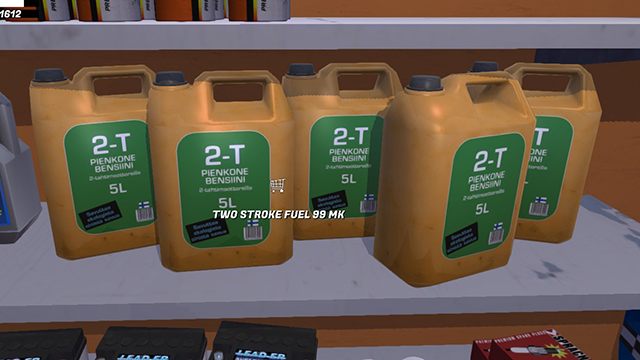 2-T canisters indicate the fuel for motorbikes and boats.

What to do when Jonnez ES suddenly disappears?

Jonnez ES has a bug. This error causes Jonnez ES to suddenly disappear without a trace. All objects that disappear due to clipping through the ground respawn in the landfill, north of the runway in the lower-left corner of the map. Your Jonnez should be there, too. An alternative method is to teleport an object using an unofficial MSCEditor application. 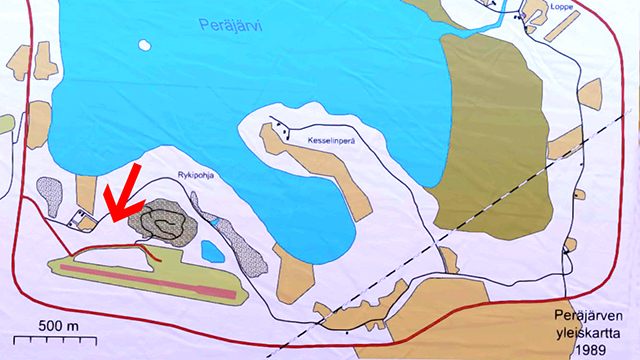 The landfill's location is pointed by the arrow.
See/Add Comments