On this page of the My Summer Car Guide, we explain the attributes that describe your character. You will learn how to care for them so that they do not turn into a red stripe of danger. We describe all the possibilities of losing a hero's life, and we'll tell you what to do to stay alive for as long as possible.

In My Summer Car, your hero is not a tough, hardy, durable Viking, but a rather fragile character who is quickly stressed, tired and gets thirsty all the time. Fortunately, it's summer and you don't have to worry about the cold. However, you need to keep an eye on other attributes, because they can cause side effects or even can lead to the death of your character. Attributes and their current level can be found in the upper left corner of the screen. The current day of the week is always shown above them. You can turn them on or off by pressing F2.

Most of them increase to the red value without visual indication or a warning up to the level of 200%, so in any case of emergency state or warning condition, you have some time to react. You won't always see the attribute bar decrease immediately, e.g. when an item has a one-time percentage effect which is much smaller than 100%. For example, drinking a bottle of beer you will reduce the hero's stress by 3%. If the total stress level is 120%, the red bar will disappear only after 7 bottles of beer have been drunk. 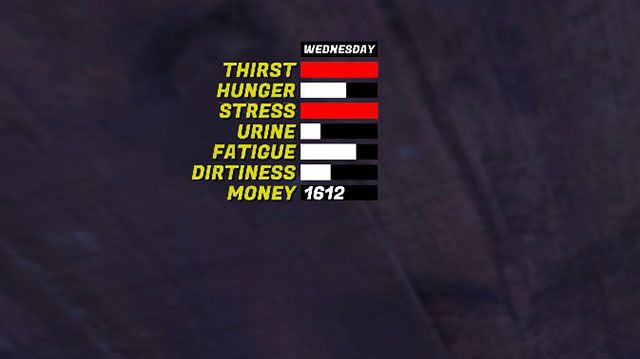 Thirst is an attribute that increases automatically at a constant speed. Some actions can, however, speed it up considerably. Don't underestimate the red zone of thirst's attribute bar, because when it reaches 200%, the character will die. Thirst increases significantly during:

The easiest and cheapest way to reduce your thirst is by crouching under the tap in the shower cabin or leaning over a running tap in the kitchen. You can also drink milk, coffee, strong self-crafted beverage or beer. If you like challenges, you can also urinate upwards and making it fall into your mouth...

Juice bought in a store is a concentrate. It won't satisfy the thirst but increase it. Vodka and coffee are the least quenching drinks. The best ones are tap water, milk, beer.

Hunger is another attribute that if ignored, will lead to the death of our character. We reduce it by eating meals:

At the beginning of the game, we can find only small food supplies in the house. Food can be bought in the store in the city - try to buy a lot. If it is late and the shop is closed, you can order a sausage with fries at the pub nearby. Sausages are a type of food that you can eat while they are hot - place them on a heated cooker or grill (you will find it in the garage). Grilled sausages are better at reducing hunger, but they're easy to burn - cooking time is about 5 minutes. 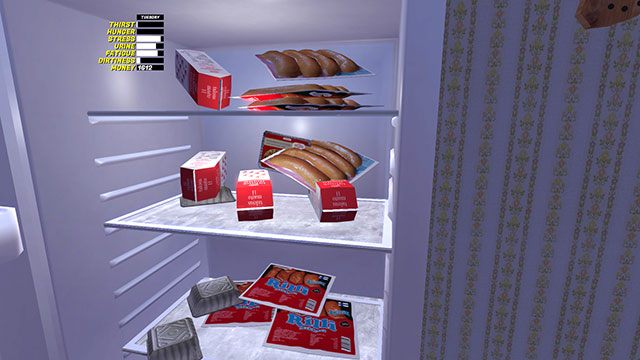 While in the store, you should buy as much food as you can.

If ignored, stress, like hunger or thirst, can lead to your death. It has a specific growth value that increases in certain situations. Similarly, by doing different things, we can reduce stress. Stress grows faster when:

We can reduce stress in several ways, although some of them have their side effects. A rapid decrease in stress is caused by spilling water on hot stones in a sauna. Alternatively, you can swim to the island on the lake - there, the stress level automatically stops going up. The island is a "stress-free" place. Details on how to get there and what you can do can be found in the chapter called Resting on the island. In addition, you can also: 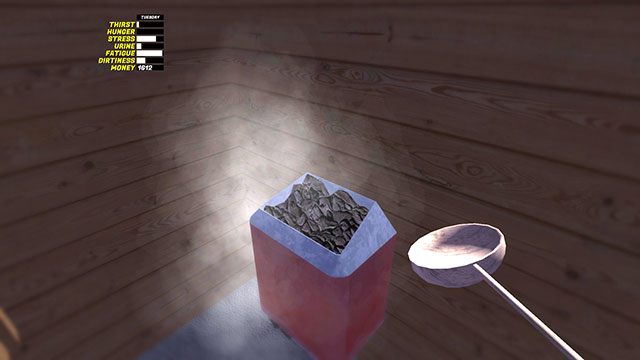 The urine level in our bladder can also be fatal. As you can probably guess, drinking liquid or eating salty food (Chips, French fries with sausage) increases urine level in the body. To reduce the bar, just press the button that is responsible for urination - R. Try to aim at the toilet, not around it.

After one of the updates, the fatigue is no longer fatal but can cause side effects. A tired character will pass out and have problems with sight. To regain consciousness, pull the mouse sharply. You can stop fatigue from building up by drinking coffee but like smoking, drinking too much coffee can be addictive. This will result in fatigue building up faster.

You can reduce fatigue by sleeping in a bed (in your room - not in the parents' bedroom), in the back seat of the Satsuma car and on the couch. Fatigue can quickly accelerate by watching the TV at night. You can't go to bed (to, e.g. speed up the time or get rid of the effects of drinking alcohol) until your fatigue bar reaches a certain level to a certain value.

Dirtiness happens automatically over time. This causes nothing besides attracting flies and the occasional buzzing sound. It has no negative effects. You can wash in the shower or in the lake.

In My Summer Car, our character can die rather quickly and unexpectedly. Here is a list of situations and opportunities that can lead to death: