This section contains a complete walkthrough for Parents, bathtub, and the giant fish chapter in My memory of Us. Here you will find a thorough guide for chapter 17 with screenshots. With this solution to My Memory of Us, you will easily beat the game.

First, go to the right and down the ladder. Grab the hand of the girl and walk closer to the right side, to the pistons. Charge the flashlight and quickly switch control to the girl. When the first piston rises, use spring and run as fast as possible. Repeat the process with the next pistons. Jump over the hole and go down the ladder. Move the girl to the left and pull the lever. Part of the pistons will deactivate, enabling you to freely pass through as the boy. Remember to load your source of the light. Pass through the first row of half-deactivated pistons. Then pass as the girl further and shoot the button - move through the next row of the pistons. Take control of the girl, walk towards the platform, and use the lever. Now, enter the powered circles like in the picture below. You will have a rather hard riddle to solve. 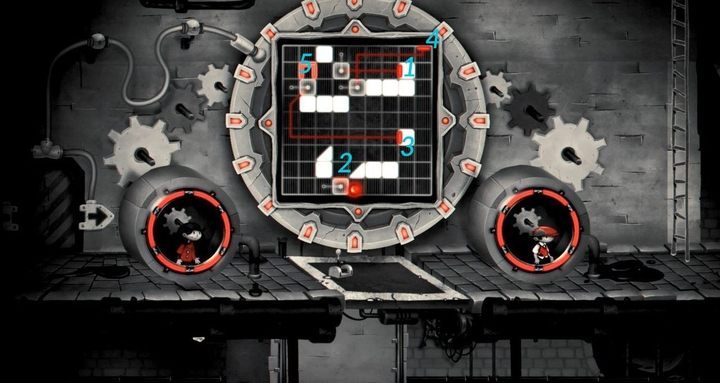 In this riddle you must lead the ball to the spot marked with an open red square.

The squares with sides highlighted in red are switches that move the transparent blocks. You can move the whole board to the left or to the right. The easiest option is to start maneuvering the switch 1, then 2, and then 3. The switch number 4 doesn't even need to be moved. Your target is the open square under number 5. Once you place the ball in the proper place, the passage on the left side will open. Pass through it and move to the right. Climb the ladder, shoot the button and look through the periscope. Speak with the man. Now, go down the ladder and speak with the man on the right side, near the chain. The passage down will be unlocked - use it. Speak with the nurse. On the right side of the room, you will find a memory. 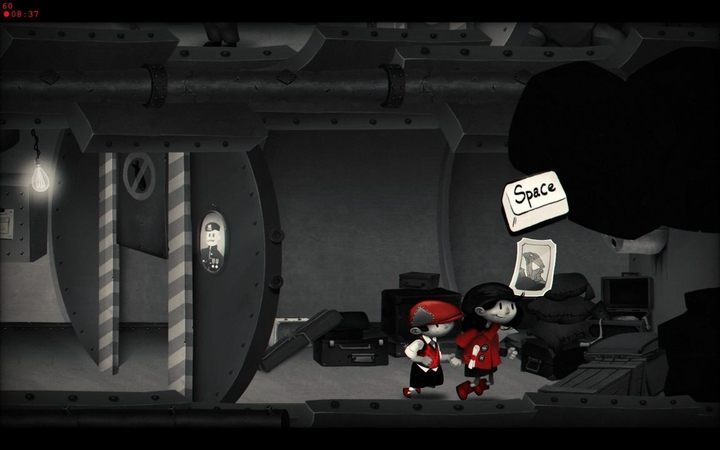 The memory can be found in the same room as the nurse. It's on the right side.

Now, get up and speak with the man near the chain again. Then, go through the door to the pipe Now, you must travel through the pipe system. Follow the pattern shown in the picture below (unless you want to "explore" the pipes - there is an achievement for getting lost). 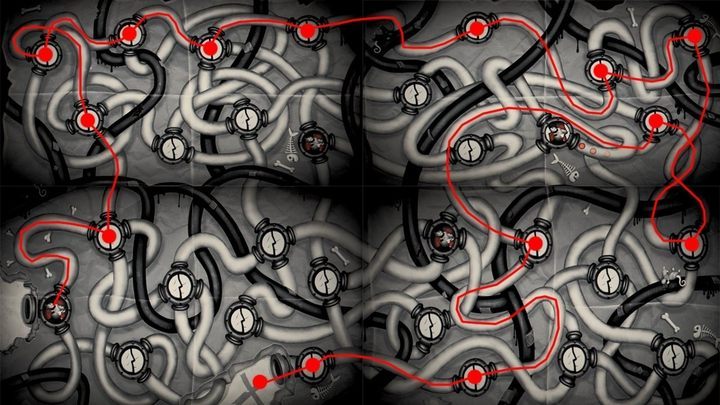 The picture shows the path to the target (marked with the cross at the end of the road).

Leave the pipe and speak with the girl. Walk to the bathtub and push her into the water. While moving through the water, avoid the pieces dropping from the pipes - the game signals when they will fall with a movement of the pipes. Soon you will face a giant fish. 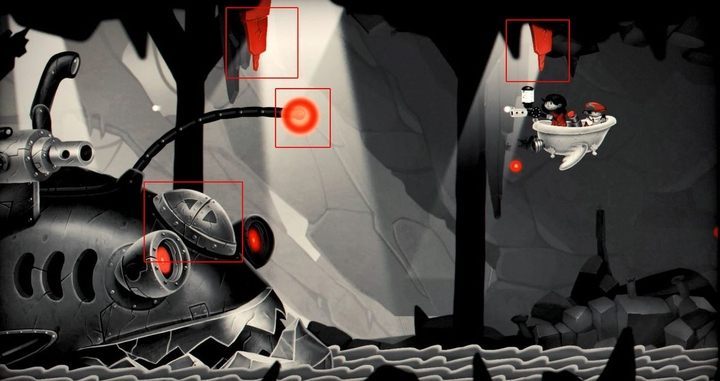 The weak point of the enemy is its forehead with a glowing light and the crystal hidden between the eyes.

In order to defeat the enemy, first you must shoot down the glowing light at the end of the forehead of the fish a few times (until the light stops glowing). Then, a crystal between its eyes will open - you should shoot down the hanging read stalactites in such way that they fall on the crystal. Repeat the process a few times. The fish will attack you with cannon on its back, with homing torpedoes, and with a laser. All attacks can be easily avoided - the torpedoes are slow and the laser needs a few moments to charge. From time to time, the fish will escape underwater. You should take advantage of that time - there will be some platforms that repair your bathtub. There are always three such platforms - simply fly through them. Once you defeat the fish and reach the new family, push the girl a few times in their direction (with the interaction key).