The factions in Mount and Blade 2 Bannerlord provide many interesting features. After joining a faction you can participate in wars with other kingdoms, take part in votes or even receive your own land (settlements) in the form of a castle or city. On this page of our guide we have described how to join a faction in Bannerlord. We have explained two ways here - as a mercenary and as a vassal. In this section you will learn the difference between a mercenary and a vassal, find out how to get settlements and what factional voting is all about.

How to become a mercenary? 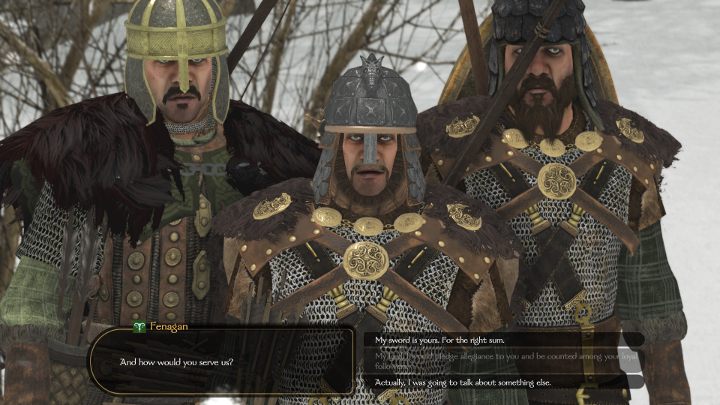 Go to any lord of your choice and offer him your service as a mercenary.

Becoming a mercenary is the easiest way to join the faction. To become a mercenary you have to reach the first level of the clan - in order to do so, complete a mission called Rebuild Your Clan. Then go to any lord of the faction you want to join - the locations of the lords can be easily found in the game's encyclopedia (you can check it by pressing the N key). Now tell him that you want to work as a mercenary.

You will immediately become a mercenary of the faction. From now on, the faction's enemies become your enemies, and you will receive a small salary every day. But as a mercenary, you have no rights in the faction. You cannot vote in the decisions associated with the kingdom, you will not receive your city or castle, and you cannot call an army - these privileges are available only after becoming a vassal.

How to get the first tier of the clan?

How to become a vassal? 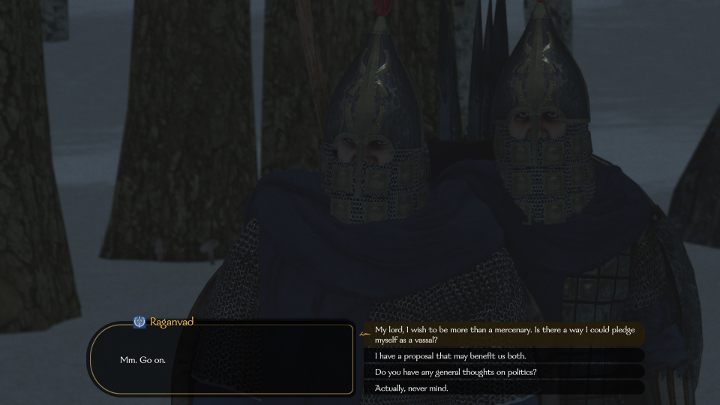 Only the leader of a faction can appoint you as a vassal.

Being a vassal offers much more options than acting as a mercenary of the faction. The requirement to become a vassal is to reach the second tier of the clan - in order to do this you have to gain reputation by winning battles (the larger enemy army you defeat, the more reputation points you gain). Now go to the faction leader. During the conversation, offer him your services as a vassal - if you don't have a negative reputation status with him or you are already a mercenary of his faction, he will accept your offer.

Now you've become an official vassal of the faction. The main benefit is the opportunity to take part in the kingdom's voting process. Voting system determines which vassal shall be the owner of the conquered lands. Also, important decisions, that have an impact on all vassals of particular faction, are being made by the voting system.

How the voting system works in the kingdom? 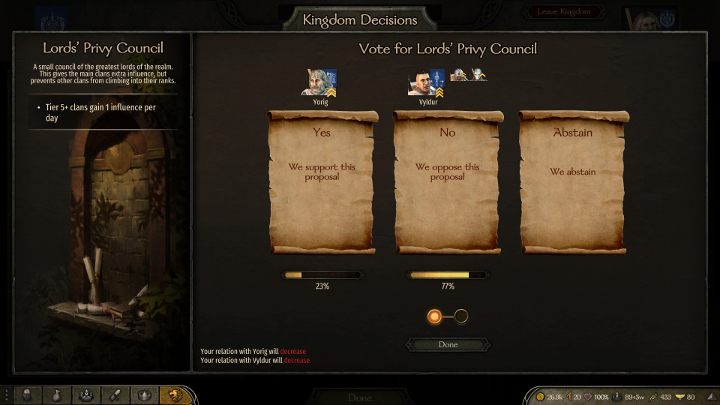 Voting system and final decisions affect all vassals of the faction.

Votings and votes occur quite often in the kingdom. The main purpose of voting is to assign newly conquered cities or castles to vassals. After your faction conquers a hostile land, you will get a notification about voting - you can participate in it by checking the kingdom window. During the voting, you select which vassal will receive the conquered land. Sometimes your character will also appear there (this depends on the reputation status and overall strength of your clan). While voting, you use the so-called Influence Points - you gain them by winning battles. If you don't have enough points at the moment, then you can't vote.

Voting system is also used to determine current policies of the kingdom. There are all rules and laws of a faction that may affect every vassal - for example, these can be changes in the level of taxes or laws associated with the aforementioned influence points. The laws of the kingdom will not always bring you benefits. It may turn out that the vassals will vote for the rule that may change the amount of received influence points. Instead, more powerful clans of the faction will acquire them. Also, keep in mind that some votes and decisions may be unfavorable to specific lords or other vassals - this will decrease your reputation status with them.

How to get settlements? 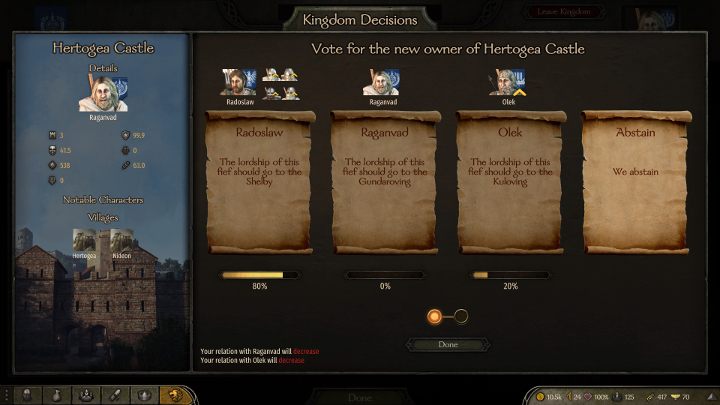 You can obtain a town or a castle by voting system.

As a vassal, you can easily get your own town or castle. This can happen during the voting process, when the kingdom will assign you a land. After you join a particular faction, vassals will often assign you one castle. Voting on distribution of land takes place after each town or castle has been conquered - if you appear among the candidates that may obtain the land, then you can vote for yourself. The more influence points you spend, the better your chance of winning is. Lords and vassals with whom you have high reputation or relations will often vote in your favor.