The combat system in Mount and Blade 2 Bannerlord is simple and intuitive, but slightly different from most games - so it is worth explaining how it works. On this page of the guide we have described all available methods of fighting. You will learn the basics of taking blows, learn how to block and how to use ranged weapons. We've also described mounted combat (for example how to lower the lance) and control the horse. We also list the best weapons for beginners.

First, it's worth learning the basic controls that will be used to apply the techniques described below. The table focuses only on combat - full control scheme of Mount and Blade 2 Bannerlord can be found in a different section of the guide.

In Mount and Blade 2 Bannerlord, you decide the direction of your attacks. Same goes for blocking - you have to choose the direction from which the attack is coming from to get a proper block. The combat system itself is very simple, but if you haven't played the previous parts of the series, it's worth spending some time in the tutorial to learn character animations or the speed of throwing punches. 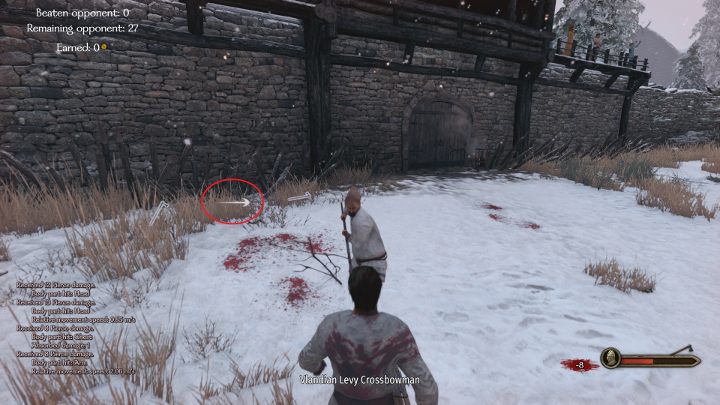 An arrow on the screen shows the direction of attack.

The image above highlights the arrow - it shows the direction of your attack. The direction of the attack is determined by mouse movement. For example - if you want to make a cut from left to right, you need to swing the mouse to the left.

You can also carry out attacks from above and thrusts. To attack from above, you have to jerk the mouse upwards; in order to deliver a thrust, push it downwards. Not all weapons allow the full range of attacks. An example are pole weapons, which can only perform high and low thrusts. You can also kick your opponents and push them away with your shield.

Blocking works the same way as throwing punches - while blocking, the arrow determines which side you block from. Of course, blocking a blow with a weapon is not easy. You have to constantly watch your opponent and block attacks from the right angle. For this reason, using the shield makes defense significantly easier. When using the shield, you also can determine the direction of blocking, but the surface of the shield is usually large enough to block most attacks.

Distance weapons in Mount and Blade 2 Bannerlord include bows, crossbows, and throwing weapons (javelins and axes). These weapons can be used on foot as well as when riding on horses. Of course, attacking from a horse is a lot harder, but gives you more mobility. 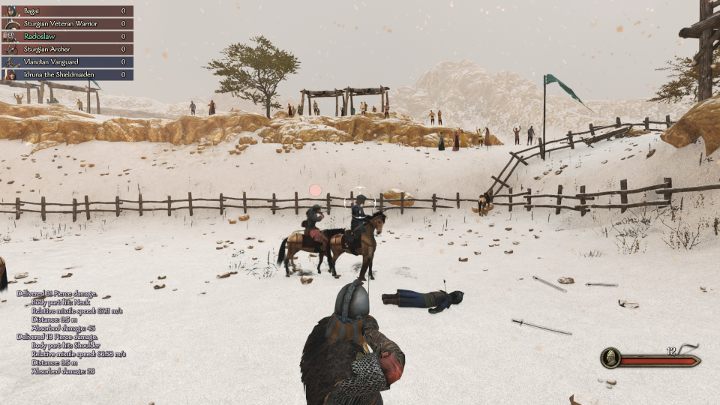 The smaller the sight the more accurate the shot.

The rules for using distance weapons are simpler than the mechanics of melee weapons. When you draw a distance weapon (bow, crossbow or a throwing weapon) you will see a crosshair on the screen. After starting the attack (i.e. holding down the left mouse button), it will be narrower, and will gradually expand. The most accurate shots are fired when the sights are the narrowest. The more the crosshair expands, the less chances you have of hitting the enemy.

There isn't a single, most efficient ranged weapon in Mount and Blade 2 Bannerlord - each has its own pros and cons. We shall explain how the ranged weapons, such as bows, crossbows, and throwing weapons, work: 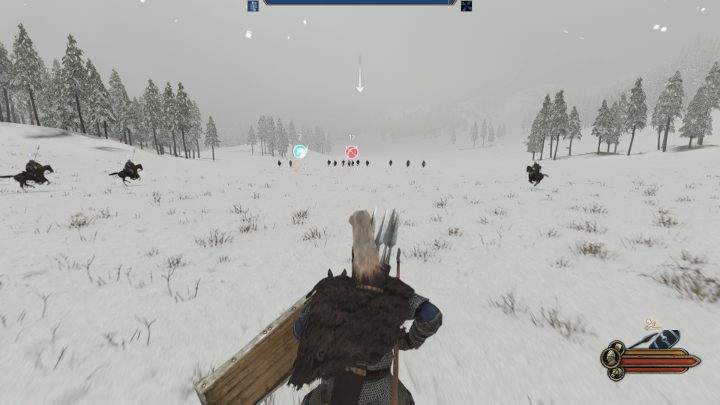 A successful cavalry charge can win you a battle.

On horseback, you can use all kinds of weapons. Of course, shooting a bow on a running horse involves more difficult aiming. You can achieve the best results with a lance - weapons marked Couch Lance. All you have to do is speed up the horse and lower the lance (controls below) - if you hit the opponent, you will inflict massive injuries.

You can't lower the lance at any time - after you hit an enemy, you have to wait a few seconds. During this time, you might want to switch to another weapon. Two-handed weapons offer the best range, but single-handed weapons are also effective.

Riding on horse provides a charge bonus to damage - the faster you go, the more damage you deal. War Horses are best suited for battle - they have the most HP and inflict the most damage from charge.

Controlling the horse is a bit different than controlling the character. In the table below, you will find all the options available while riding. You'll learn how to charge and lower the lance in Mount and Blade 2 Bannerlord.

The best weapons for beginners 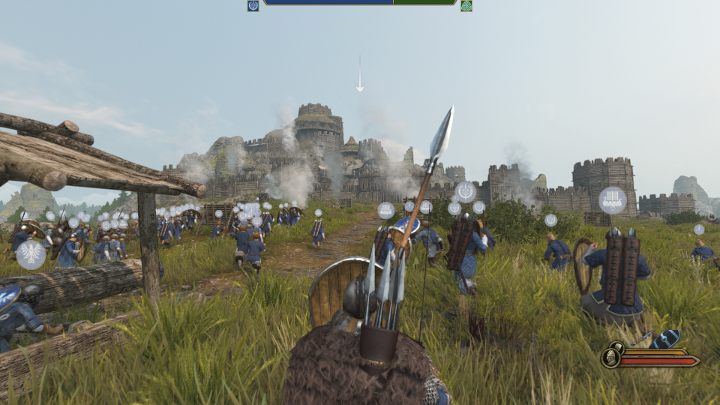 The set below works in every situation.

With little experience in Mount and Blade 2 Bannerlord, it's worth carrying a universal set of weapons. In the game, you get four slots for weapons - in the campaign mode, you can change weapons freely, but on the battlefield, this is no longer possible. We recommend equipping the hero with a single-handed weapon, a shield, a lance and a throwing weapon - having the lance also requires having a horse.

These weapons will work in any situation. On foot, the combination of a one-handed weapon and a shield is excellent - it is very useful during sieges and raids on bandit hideouts. The lance will strengthen your mounted charges, and the thrown weapon will be useful for killing or weakening your opponents. If you do not want to use a horse, replace the lance for a throwing weapon, a bow or a crossbow, and a set of arrows or bolts. ?