After creating your hero and completing the tutorial in Mount and Blade 2 Bannerlord, you will finally be able to explore the entire map of Calradia. A huge, open world can seem overwhelming, and it might not be exactly clear what to do. We've prepared advice just for you. The guide will tell you what should be the first steps in the game.

Haven't created a character yet? Check out the section of the guide dedicated to character creation and skills.

Get your first soldiers 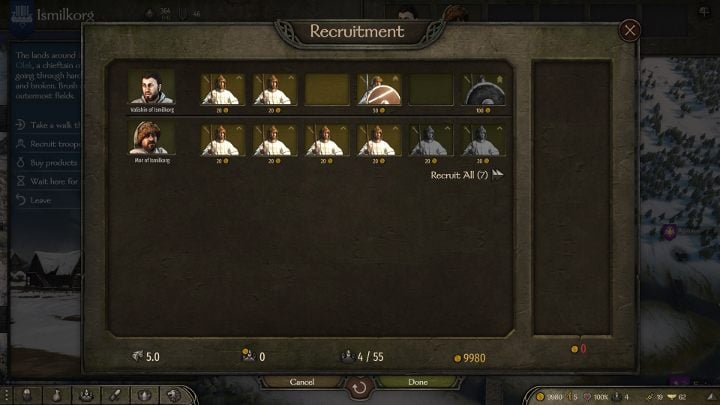 Soldiers can be recruited in towns and villages.

Your first goal should be to recruit basic soldiers. At first, you can have about 20 warriors in your band - the starting amount of gold is quite enough to recruit them. Go to nearby towns and villages - this is where you can recruit soldiers after choosing the "Recruit troops" button. Also remember to buy food - your army needs to eat every day. If there's no food, you have to be ready to face sweeping desertions.

Managing and recruiting the army

This is one of the most important elements in Mount and Blade 2 Bannerlord. There's a few sections that deal with this in the guide: 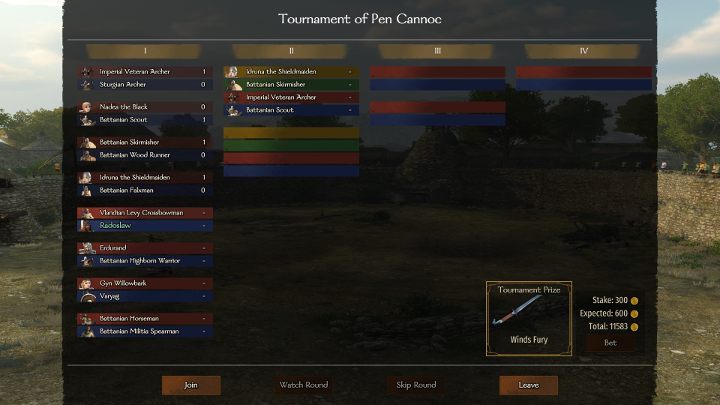 Participating in tournaments is one of the ways to make money.

If you have a small army, you can already start making gold. There are many ways to earn gold, but at first, it's best focus is on hunting bandits. The advantage of this approach is that you can both earn money and gain experience for both your character and soldiers. Fighting in the arena and entering tournaments can also yield some gold. Arenas are available in any city and at any time - the more opponents you beat, the more gold you get. Tournaments, in turn, are organized from time to time in random cities - there's a valuable prize for winning (good quality sword, armor or horse) and plenty of gold if you bet on yourself before the tournament. Also remember about performing missions. Successful completion of missions provides quite a lot of gold, and improves the relationship with the client.

If you're interested in learning more about making money, check out the section entitled How to earn money?.

Upgrade the clan to the next level 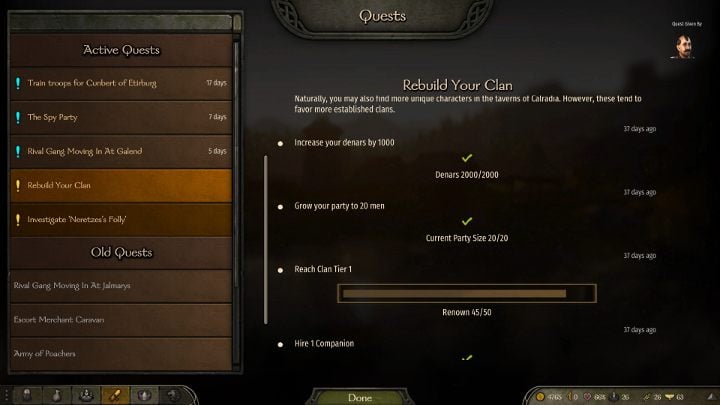 The mission "Rebuild Your Clan" can upgrade it.

In the first hours of Mount and Blade 2 Bannerlord, you should also focus on upgrading the clan to the next level. It's not actually rocket science. You will need 2,000 gold pieces, 20 soldiers, one companion, and get 50 reputation points. The first two requirements are described above. Companions can be found in taverns, reputation is obtained by winning battles, which will inadvertently happen if you start hunting bandits for gold. Reaching first clan level will allow you to get more soldiers, and also to join a faction as a mercenary. You can control all progress to the first clan level in a mission log entry titled Rebuild Your Clan.

Are you having trouble recruiting a companion? Refer to Companions. All the tips about reputation are listed here: How to gain reputation?. 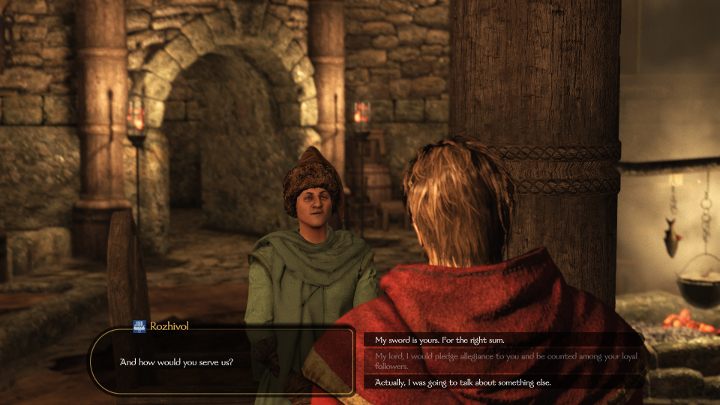 Any lord can let you join his faction.

After reaching the first clan level, you can join one of the factions in Mount and Blade 2 Bannerlord. With little experience in the game, it's worth picking the faction that is currently the strongest in Calradia. To check that, zoom all the way out, and see which kingdom is the biggest.

Joining a faction is simple. Find a lord of a given faction and tell them that you want to serve their kingdom as a mercenary. That way, you will become a mercenary for a faction. What does that entail? You will receive a small salary every day, and enemies of the faction will also become your enemies. A war with another faction provides many possibilities. You'll be able to fight lords, which is a bigger challenge than killing ordinary bandits. You can also raid the caravans of a hostile faction - it's a great way to make even more money. In addition, the lords of your faction may assemble an army. If you join it, you will travel with other lords, raid villages and besiege enemies' castles.