Your first decision in Mount and Blade 2 Bannerlord is to choose the character's culture - it provides additional bonuses that influence the game. You can't change your choices during the game, so make a conscious decision. This page has descriptions of all cultures, as well as hints on which culture in Bannerlord is the best.

First, you should check all the cultures in Mount and Blade 2 Bannerlord. The following table lists the cultures available in the game, as well as their impact on gameplay.

Which culture is best? 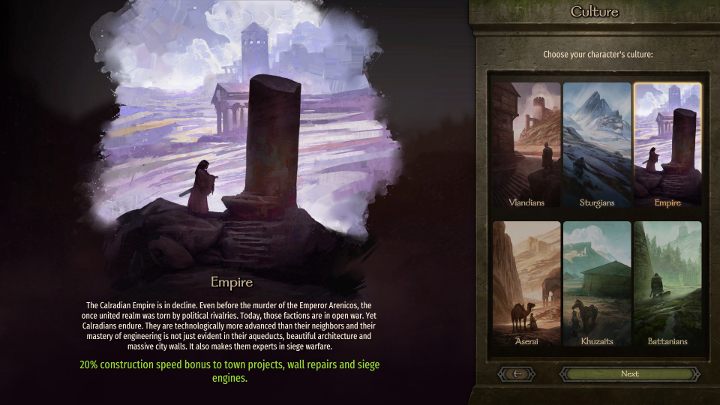 The answer to that question isn't easy. It is impossible to tell which culture in Mount and Blade 2 Bannerlord is the best, but it is possible to determine the most universal one. Vlandians culture will work in any situation, regardless of your play style - the extra experience for soldiers is always useful (they will advance faster).

Aseri culture, on the other hand, works well with characters focused on trading. If you are going to make money from caravans, choose that culture.

Another notable culture is Empire. Its bonuses will only become apparent later in the game - Empire culture will accelerate the development of your cities and make it easier to besiege hostile locations. However, you have to remember that you won't feel any benefit of choosing this culture during the first few hours of the game.

The cultures of Sturgians, Khuzaits and Battanians are far less interesting than the above and only affect the speed of movement of your party.